Who's in Charge? 2 Fight for Control of US Consumer Watchdog 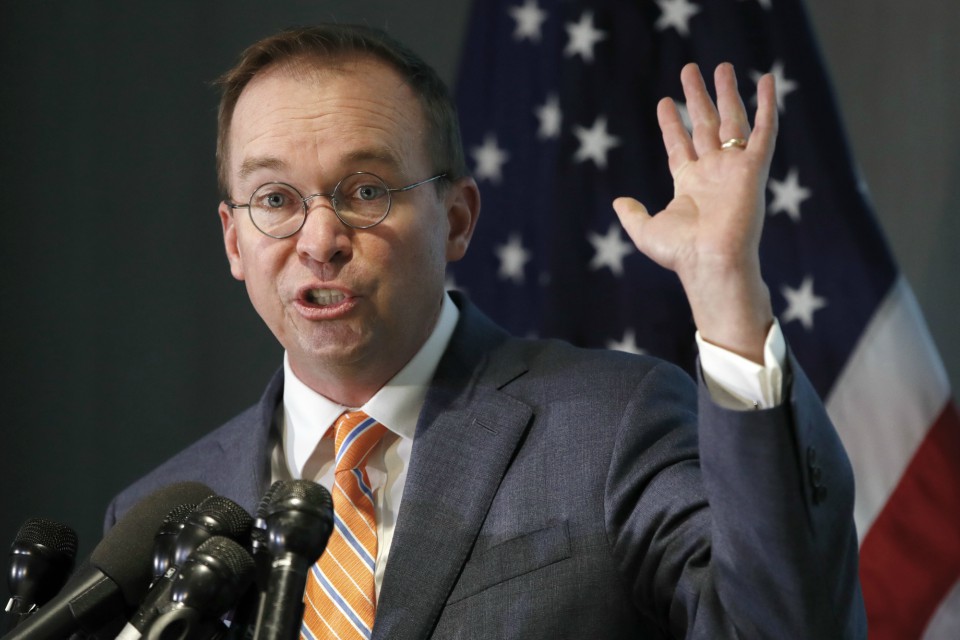 Leandra English, who was elevated to interim director of the bureau late last week by its outgoing director, sent staff an email offering Thanksgiving wishes. Meanwhile President Donald Trump's choice for the role — White House budget director Mick Mulvaney — then emailed staff to tell them to "disregard" any instructions from English.

Laying down markers in what has quickly become a war of optics, both signed their missives "Acting Director."

While the atmosphere at the CFPB may seem like routine Washington theatrics, which person will run this agency for the coming days, weeks or possibly months will have a real impact on banks and other financial companies and their customers.

English has asked a judge to issue a temporary restraining order to block Mulvaney from taking over the bureau. She cited the Dodd-Frank Act, which created the Consumer Financial Protection Bureau. She said that as deputy director, she became the acting director under the law and argued that the federal law the White House contends supports Trump's appointment of Mulvaney doesn't apply when another statute designates a successor. The case, at the U.S. District Court of Washington, D.C., is being handled by Judge Timothy Kelly, a Trump appointee approved by the Senate recently.

English was promoted to chief of staff to deputy director by Richard Cordray as he prepared to resign last Friday.

The Trump administration defended its position in a court brief filed near midnight Monday.

It said that both the Justice Department's Office of Legal Counsel and the general counsel of the CFPB "agree that the President of the United States lawfully designated John M. Mulvaney as the CFPB's Acting Director pursuant to the VRA (Vacancies Reform Act).

"Plaintiff's arguments to the contrary rest on a bureaucratic sleight-of-hand effected on the final day of former CFPB Director Richard Cordray's tenure," it said, alluding to English's elevation by Cordray to the agency's top job on an acting basis.

The judge had said earlier that he would read the government's response and "go from there."

Cordray was appointed to the position by President Barack Obama and has been long criticized by congressional Republicans as being overzealous, but lauded by consumer advocates for aggressively going after banks for wrongdoing, like in the case of Wells Fargo. He was one of the last Obama-era political holdouts.

Mulvaney, a former Republican congressman from South Carolina, has called the agency a "joke" and an example of bureaucracy run amok. He is expected to be critical of the bureau's previous work and will likely push to dismantle some of the agency's previous actions.

Cordray said Monday that the issue should be settled by a court.

"The law says that I shall appoint the deputy director, and I did so," he said. "My understanding of the law is that the deputy director becomes the acting director upon my departure. If there are disagreements about those issues, then they should be settled in the courts."

Mulvaney arrived Monday morning at the agency with doughnuts, and his staff tweeted out photos of him meeting with agency division heads. Meanwhile, English sent a department-wide email saying she hoped everyone had a great Thanksgiving.

Meanwhile Mulvaney quickly responded to English's email, instructing CFPB staff to "disregard" any directions from her.

At the center of the controversy are two laws: the Dodd-Frank Act, the law passed after the financial crisis that created the bureau, and the Federal Vacancies Reform Act, which gives the president authority to appoint temporary department heads while their permanent nominees are approved by the Senate.

While the Vacancies Act does allow a president to appoint acting directors at agencies like the CFPB, the Dodd-Frank Act has specific language that seems to indicate that only a deputy director can step into the acting director position.

English was elevated to the deputy director position shortly before Cordray resigned.

The Office of Legal Counsel, which acts as a legal adviser to the president, also argued that Mulvaney, not English, was the legitimate director of the department.

"The Administration is aware of the suit filed this evening by Deputy Director English. However the law is clear: Director Mulvaney is the Acting Director of the CFPB," White House press secretary Sarah Huckabee Sanders said.

One straightforward solution to the issue of who runs the CFPB is for Trump to nominate his own permanent director. But it may take several weeks for someone to be nominated and even months until the Senate were to confirm his or her appointment.

Until the issue of who is in charge is cleared up, any actions taken by the CFPB are likely to come under legal scrutiny from the banks, credit card and other financial companies that the agency oversees. No fines are likely to be imposed or new regulations written.

Bank lobbyists are hoping for a lighter touch by any Trump nominee to the CFPB.