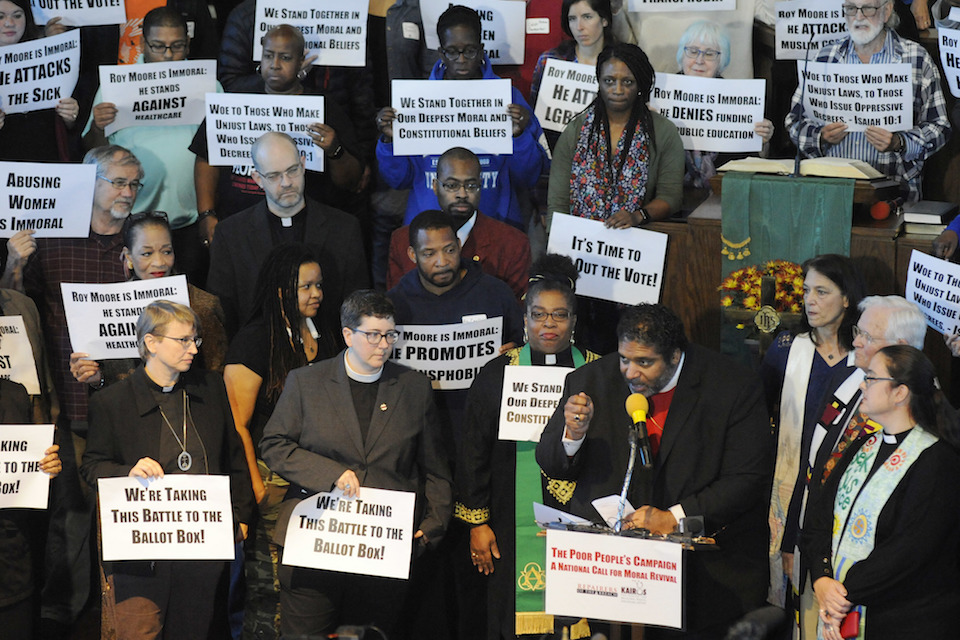 BIRMINGHAM, Ala. (AP) — A leading figure among religious liberals says the candidacy of Roy Moore for U.S. Senate is a struggle for the "soul of the nation."

The remarks on Saturday by the Rev. William J. Barber come a day after a letter signed by dozens of progressive pastors in Alabama said Moore — dogged by recent allegations of inappropriate conduct toward teenage girls decades ago — is unfit to serve.

Since last week, Moore has been engulfed by accusations of sexual misconduct toward women in their teens when he was a deputy district attorney in his 30s. Several of his accusers have allowed their identities to be made public.

Five others said Moore pursued romantic relationships with them when they were between the ages of 16 and 18.

Barber, former head of the North Carolina NAACP, spoke at an anti-Moore rally at the Tabernacle Baptist Church in Birmingham, Alabama, that drew more than 100 people.

Moore calls himself a conservative Christian

The event was in direct contrast to a news conference Thursday during which religious conservatives expressed their commitment to Moore, who describes himself as a conservative Christian who hues to family values.

Signs carried by Moore opponents at Saturday's rally decried his opposition to gay and transgender rights.  Moore was also criticized for opposing federally backed health care, assistance for the needy and more.

Barber and other speakers claimed Moore's campaign is fueled by a perversion of Christianity linked with white supremacy, and Moore is trying to take those forces to the Senate.

"What is happening now in Alabama matters for the soul of the nation," said Barber, of Goldsboro, North Carolina, and the force behind the "Moral Monday" protest movement that calls for greater rights for gays and minorities.

On Friday, more than 50 Alabama pastors have signed a public letter stating Republican Roy Moore isn't fit to serve in the U.S. Senate. The letter continued to collect signatures Saturday.

The pastors cite Moore's opposition to the expansion of Medicaid, which provides health care for the poor. It also accuses him of denigrating people from other countries and faiths and cites his opposition to homosexuality.

Moore has support from evangelicals

The letter was written by a group of pastors in Birmingham.

It includes the signatures of ministers from mainstream and liberal denominations including Methodists, Presbyterians, Episcopalians, the United Church of Christ, and some moderate Baptists.

Moore still enjoys the support of conservative evangelical leaders, but he has ignored mounting calls from Washington Republicans concerned that if he stays in the race he may not only lose a seat they were sure to win but also may do significant damage to the party's brand among women nationwide as they prepare for a difficult midterm election season.

This story corrects headlines to omit reference to calls for Moore to quit race.