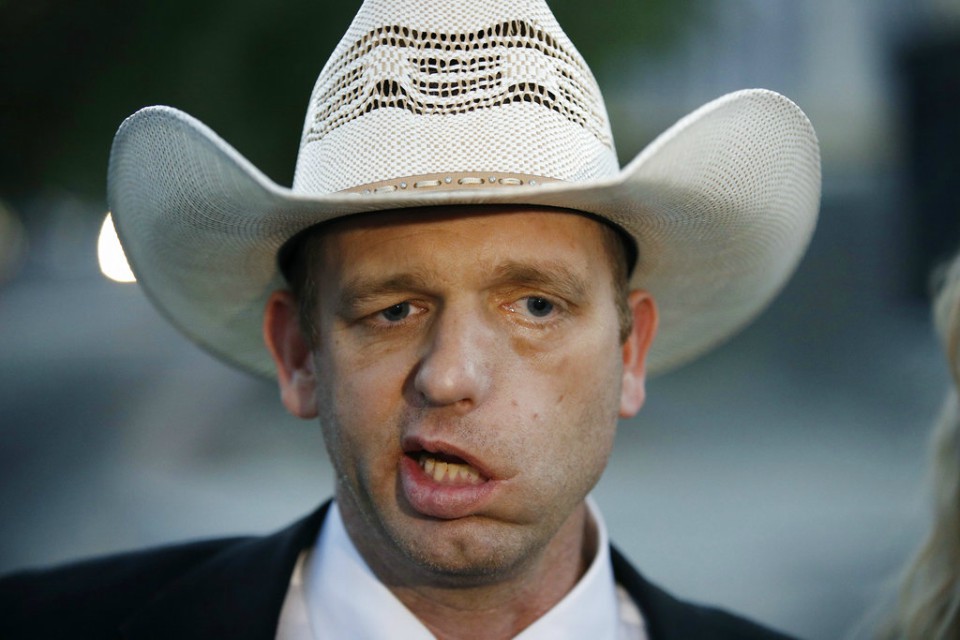 LAS VEGAS (AP) — Cattleman and states' rights figure Cliven Bundy's eldest son goes before a federal jury on Wednesday to provide firsthand allegations of government misconduct, a day after his father's lawyer blamed federal agents for escalating tensions ahead of a 2014 gunpoint standoff near the family ranch in Nevada.

Ryan Bundy is serving as his own attorney in the trial that opened Tuesday with the top federal prosecutor Las Vegas casting him, his brothers and his father as leaders of a conspiracy to enlist armed militia members to force the U.S. Bureau of Land Management to abandon efforts to round up Bundy cattle from public rangeland.

In pretrial hearings, Ryan Bundy raised questions about FBI camera surveillance of the Bundy family homestead, and challenged federal prosecutors to turn over recordings of any videos that were made.

Acting U.S. Attorney Steven Myhre said there were none.

"This case is not about protesting. This case is about breaking the law," Myhre said. He cast the armed standoff as extortion and theft from the Bureau of Land Management of almost 400 Bundy cattle that had been rounded up.

One clip showed Bundy's sister, Margaret Huston, thrown to the ground by a federal agent.

Myhre told the jury the 57-year-old Huston had to be pulled away from the front of a truck and knocked down for her own safety.

Another clip showed Bundy's son, David Bundy, hauled to the ground and arrested by two agents who approached him as he took photos of armed men with guns on a ridge top near the Bundy ranch.

A third showed an agent zapping Bundy son Ammon Bundy with a stun gun after he crashed an ATV into a dump truck that was part of a federal convoy of vehicles entering a highway from public range where Whipple said the family grazed cattle for 140 years.

Attorney Daniel Hill, representing Ammon Bundy, said he and lawyer Morgan Philpot may wait until after the prosecution rests to make an opening.

The defense teams maintain the four men didn't wield weapons and didn't conspire with anyone. Whipple noted that no shots were fired and no one was injured in the standoff near Bunkerville, about 80 miles northeast of Las Vegas.

He blamed a federal land management regional supervisor, who has since been dismissed, for the conduct of cattle impoundment operation agents that attracted attention of armed protesters who answered a Bundy family call for support.

Myhre derided the idea that the standoff was a peaceful protest.

"This case is about breaking the law," he said. "This is not a case about cattle grazing. It's about whether you use force and violence to enforce your belief. They got what they wanted that day. They got it at the end of a gun."

Each defendant faces 15 felony counts on nine charges including conspiracy, assault and threats against federal officers, firearms counts, obstruction and extortion. Stacked together, convictions on all charges carry the possibility of more than 170 years in prison.

The trial will also test public land policies in Western U.S. states like Nevada. Juries in Las Vegas have twice balked at full convictions of men who had guns during the Bundy standoff.

The trial start was postponed twice: Once by the Oct. 1 shooting deaths of 58 people at a Las Vegas Strip open-air concert by a man who opened fire with rapid-fire assault-style weapons from the 32nd floor of a high-rise hotel, and once by a fight about whether prosecutors properly disclosed evidence about surveillance cameras watching the Bundy homestead.