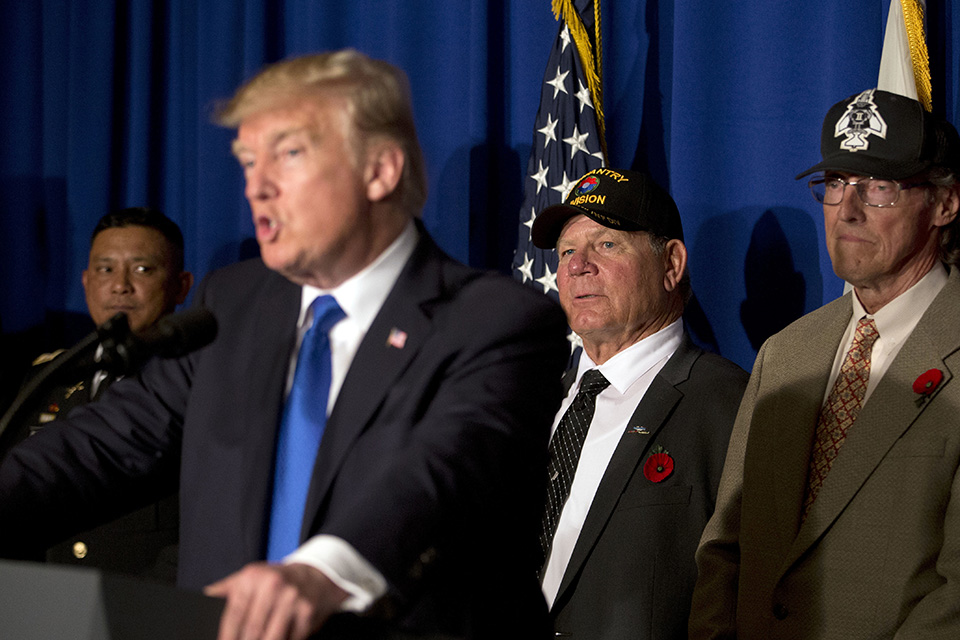 WASHINGTON (AP) — President Donald Trump speaks with pride about the progress of his overhaul of health care for veterans, declaring that the Department of Veterans Affairs already "is a whole new place." Old problems persist, though, and some of his steps are not as advanced as he advertises.

For Veterans Day, the White House came out with a two-page statement to support the contention that "tremendous progress has been made in a short period of time." And in Vietnam on Friday, Trump told a small group of U.S. veterans of the Vietnam War that Veterans Affairs Secretary David Shulkin is doing an "amazing job" on "things that we are doing and in the process of doing."

"In the process" is the key phrase, because some of Trump's big plans for veterans are lagging, and problems he has declared to be cured are still evident.

While the VA has made some strides under the leadership of Shulkin, a holdover from the Obama administration who began work on several of the changes before Trump took office, the White House statement doesn't tell the full story.

It doesn't divulge that a key Trump administration effort to improve wait times by revamping VA's electronic medical record system may not be completed for eight more years — when Trump will be out of office.

Nor does it acknowledge that a bill recently signed into law to reduce delays in processing disability appeals from veterans unhappy with their payouts won't address the 470,000 pending claims.

Other announced efforts, such as the posting of VA wait-time data and a new White House complaint hotline, have since been shown to be narrow in scope or have been criticized as ineffective by lawmakers or veterans groups.

A look at statements and rhetoric on the subject:

WHITE HOUSE: "President Trump announced that the Department of Veterans Affairs will adopt the same Electronic Health Record as the Department of Defense. VA's adoption ... will ultimately result in all patient data residing in one common system, enabling the immediate availability of service member's medical records and seamless care between the departments."

THE FACTS: While the administration did announce in June that it would overhaul VA's aging information technology system, Shulkin admitted to Congress last month that the project to revamp electronic medical records won't be completed for seven to eight years. The full costs of the project also are not known and have yet to be budgeted.

An upgraded IT system is key to VA's effort to reduce wait times for medical care as well as fulfill Trump's promise of increasing private care options for veterans.

Under Shulkin's plan to expand the Choice private-sector program, the VA would outsource more routine veterans' care to private providers including MinuteClinics while treating more complex injuries. Success of that plan requires a seamless sharing of medical records not only with the Pentagon but also private physicians, a capability the VA does not currently have.

Shulkin also has yet to negotiate pricing for the no-bid contract with the company that designed the Pentagon's IT system, estimated to cost at least $16 billion. The big price tag has spurred bills in Congress to require regular updates from VA on timeliness and cost projections, as well as risks such as breaches to patient privacy.

WHITE HOUSE: "President Trump signed the Veterans Appeals Improvement and Modernization Act of 2017, taking action to streamline the appeals process for disability compensation claims within the VA. More than 470,000 veterans are awaiting pending decisions regarding their appeals."

THE FACTS: Trump signed the bill in August, part of a bid to reduce a rapidly growing claims backlog, but its immediate impact is overstated, as it will have no effect on the 470,000 pending claims.

Under the legislation, veterans will be able to file "express" appeals if they waive their right to a hearing or the ability to submit new evidence.

While lawmakers hope the legislation ultimately could reduce average wait times to less than a year, it applies almost entirely to newly filed appeals. Shulkin has said the VA would need Congress to approve an additional $800 million for "hiring surges" of additional appeals processors if VA hoped to clear its current backlog within 10 years.

THE FACTS: This statement glosses over one of several budget shortfalls by the VA. Congress was forced in August to approve $2.1 billion in emergency money to keep Choice running after the VA had repeatedly understated costs of the program, assuring lawmakers for much of the year that money would last until January.

Shulkin subsequently revealed an emergency shortfall in June that threatened medical care for tens of thousands of veterans.

The $2.1 billion was intended to last until February. But weeks after receiving the money, the VA acknowledged that money for Choice would again run out sooner than expected, requiring Congress to approve additional stopgap financing before the end of the year or face disruptions to veterans' health care.

Lawmakers have yet to act, in part as the Trump administration sorts out longer-term costs to the private-sector program.

WHITE HOUSE: "The VA has launched its 'Access and Quality Tool,' allowing veterans to see online the wait times at VA locations."

THE FACTS: An effort started by Shulkin when he was VA undersecretary of health in the Obama administration, the VA website www.accesstocare.va.gov provides data on wait times as well as veterans' satisfaction ratings in getting timely appointments, something that no other health care system in the country does.

Still, major veterans groups such as Veterans of Foreign Wars have faulted the data for being misleading and not depicting wait times the way a typical person would view it.

The Government Accountability Office, for instance, has noted that the data do not include the amount of wait time from when a veteran initially asks for care and when a scheduler reaches out to set an appointment, which it said could be lengthy.

In addition, GAO earlier this year continued to find evidence that VA data can be unreliable due to schedulers recording wrong dates or changing dates outright, though the VA says it is implementing new checks and training to help identify "outliers" in scheduling.

WHITE HOUSE: "The White House has opened a brand new VA Hotline staffed principally by veterans and direct family members of veterans to ensure that no complaint goes unaddressed."

THE FACTS: It opened, but it did not get off to a smooth start. Trump pledged during the presidential campaign to create a "private White House hotline" answered by a real person 24 hours a day to take complaints from veterans, leading VA to create a hotline beginning June.

Originally scheduled to be fully operational by Aug. 15, it has encountered some delays. In a letter to VA last month, Sen. Jon Tester, the top Democrat on the Veterans Affairs Committee, complained "the White House is frequently routing these calls back to local VA offices, which are often understaffed and do not have the ability to address the additional casework in a timely manner."

Tester noted the VA already had several existing options for receiving complaints from veterans and urged better coordination to make sure no one falls through the cracks.

TRUMP: "We ... extended Veterans' Choice. ... Can you imagine going to your doctor and having him say you'll have to wait for 11 days? ... And now they go, right outside, they go to a doctor in the area, we pay the bill, and it's the least expensive thing we can do and we save everybody's life and everybody's happy." — Sept. 22 rally in Huntsville, Alabama.

THE FACTS: It's not true that all veterans needing care are getting it without delay. Wait times of more than two months have been recorded during his administration.

The Department of Veterans Affairs' Choice program allows veterans to see an outside doctor if they must wait more than 30 days (never mind 11) for a medical appointment or travel more than 40 miles to a VA facility. But Choice has faced delays of its own, with wait times potentially as high as 81 days, according to the Government Accountability Office.

Over the summer, an unexpected budget shortfall in the program forced VA to limit the outside referrals, leading to additional delays in care.

Shulkin has acknowledged problems with Choice even as he seeks to expand it, noting that his main legislative focus "is getting the Choice program working right."
Not "everybody's happy," as Trump claimed.