Trump Blames Senate GOP, Not Himself, for Stalled Agenda 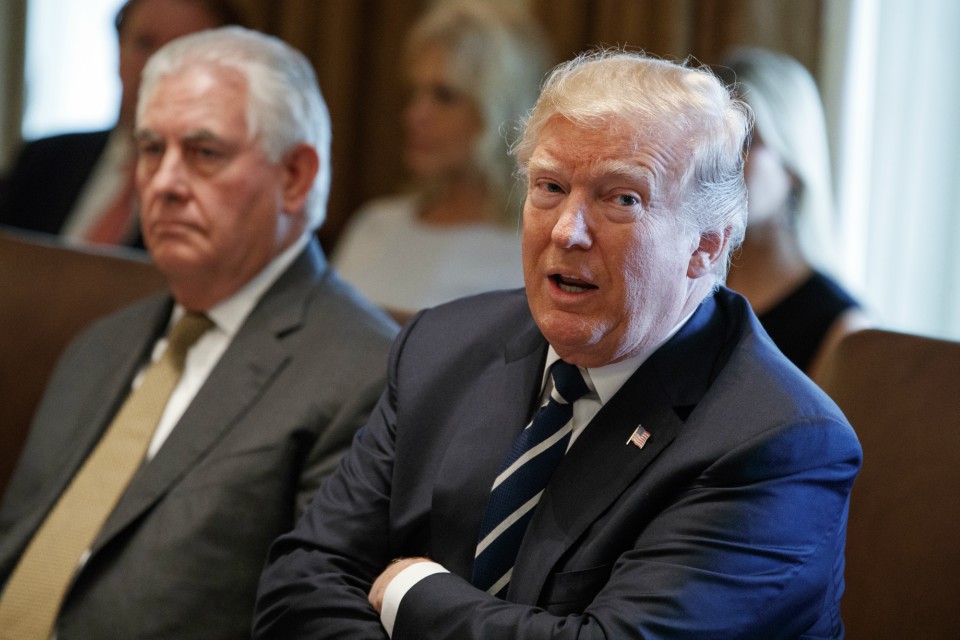 WASHINGTON (AP) — President Donald Trump blamed Senate Republicans, not himself, for the stalled GOP agenda Monday ahead of a crucial White House lunch meeting with Majority Leader Mitch McConnell on getting make-or-break tax legislation back on track.

The president also expressed understanding for former senior aide Steve Bannon's all-out war on the GOP establishment, an insurgent attack on McConnell and others that unnerves the GOP and could threaten the party's majority grip on Congress.

"I'm not going to blame myself. I'll be honest they are not getting the job done," Trump told reporters at a Cabinet meeting. He said there are Republicans "frankly who should be ashamed of themselves."

Trump repeatedly has blamed McConnell for the failure of the GOP Congress to repeal and replace Barack Obama's Affordable Care Act after years of Republican and Trump promises to dismantle the law.

He also has hinted at deals with Democrats on immigration.

Through the remainder of the year, Congress has a hefty agenda of must-do items and legislation that Trump has kicked to lawmakers to handle, from changes to the Iran nuclear accord to keeping the government open, from a tax overhaul to dealing with the young immigrants brought to the country as children and living here illegally.

Bannon, back at Breitbart News after helping Trump win the presidency and serving in the West Wing, is committed to dumping McConnell, the Senate leader from Kentucky. In a speech to religious conservatives Saturday, Bannon suggested that GOP incumbents may avoid challengers from the right flank of the party if they disavow McConnell and meet other conditions.

"This is our war," Bannon said. "The establishment started it. ... You all are gonna finish it."

Trump on Monday told reporters that he understands his former chief strategist's anger at McConnell and his frustration with Republican senators who oppose the White House agenda.

"I can understand where Steve Bannon's coming from," said the president, calling Bannon a "friend" who wants to get things done.

Trump said that he has "great relations" with many senators in his party, but complains that they're "not getting the job done."

Sen. Susan Collins, a Maine moderate who just passed up a run for governor and was a pivotal "no" vote on health care, said Bannon's rhetoric is exactly what the American people are tired of. "They don't want this hyper-partisanship. They want us to work together. And they want us to get things done," she said.

Collins, who's served in the Senate since 1997, added that Bannon's "over-the-top rhetoric is not helpful. Mitch McConnell is the Senate majority leader. The president needs him. I'm glad they're working together on tax reform and a lot of other issues. And I'm glad they're meeting this week."

McConnell responded to Trump's Twitter barrage after the failed health care effort by saying that the challenges of governing should come as no surprise.

"A lot of people look at all that and find it frustrating, messy. Well, welcome to the democratic process. That's the way it is in our country," McConnell said at a GOP event in Kentucky this summer.

Trump, a former Democrat himself, cut a deal with Democratic leaders on raising the U.S. borrowing limit and keeping the government running into the winter. The president has also talked about future arrangements, though his recent list of immigration demands soured Democrats who had seen an earlier opening for legislative progress.

Hard-right conservatives frustrated by the stalled agenda in Congress wrote in a letter last week during the Senate's break that McConnell and his leadership team should step aside.

The senators' weeklong recess also drew criticism from the White House: "They're on another vacation right now. I think that we would all be a lot better off if the Senate would stop taking vacations and start staying here until we actually get some real things accomplished," Trump spokeswoman Sarah Huckabee Sanders had said.

Senate Republicans had been upbeat about adding to their 52-48 edge in the chamber, especially with Democrats defending more seats next year — 10 in states Trump won in last year's presidential election. But the Bannon challenge could cost them, leaving incumbents on the losing end in primaries or GOP candidates roughed up for the general election.

Collins spoke on ABC's "This Week," and Graham appeared on CBS' "Face the Nation."