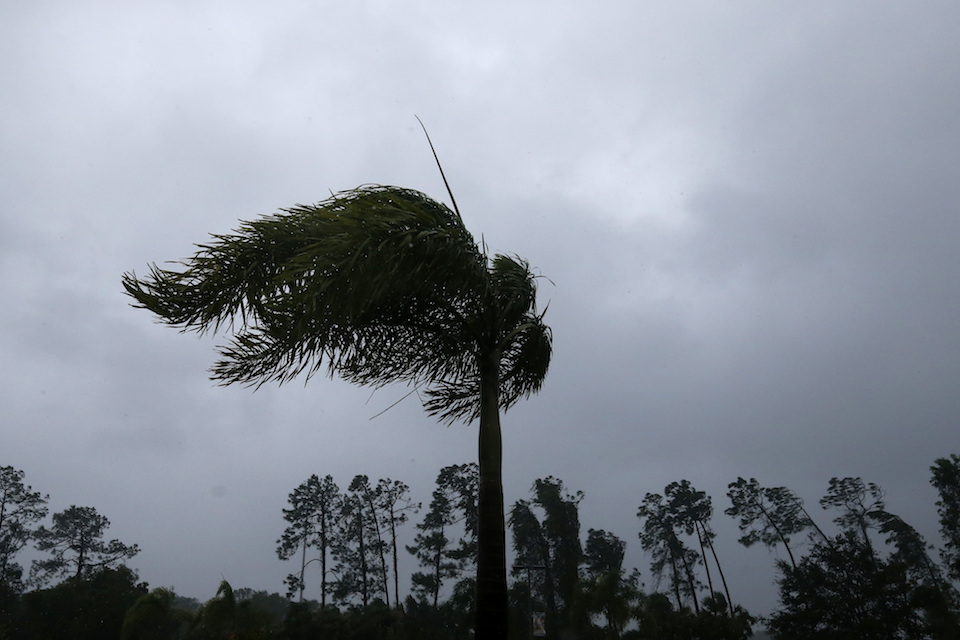 MIAMI (AP) — Hurricane Irma gave Florida a coast-to-coast pummeling with winds up to 130 mph Sunday, swamping homes and boats, knocking out power to millions and toppling massive construction cranes over the Miami skyline.

The 400-mile-wide (640-kilometer-wide) storm blew ashore Sunday in the mostly cleared-out Florida Keys, then marched up its western coast, its punishing winds extending clear across to Miami and West Palm Beach on the Atlantic side.

While it arrived in Florida a Category 4 hurricane, by nightfall it was down to a Category 2 with winds of 100 mph (160 kph). Meanwhile, more than 160,000 people waited in shelters statewide as Irma headed up the coast.

There were no immediate reports of deaths in Florida. In the Caribbean, at least 24 were people were killed during Irma's destructive trek.
Bryan Koon, Florida's emergency management director, said late Sunday that authorities had only scattered information about the storm's toll, but he remained hopeful.

"I've not heard of catastrophic damage. It doesn't mean it doesn't exist. It means it hasn't gotten to us yet," Koon said.

In the low-lying Keys, where a storm surge of over 10 feet (3 meters) was recorded, appliances and furniture were seen floating away, and Monroe County spokeswoman Cammy Clark said the ocean waters were filled with navigation hazards, including sunken boats. But the full extent of Irma's wrath there was not clear.

The county administrator, Roman Gastesi, said crews would begin house-to-house searches Monday to check on survivors. And an airborne relief mission, led by C-130 military cargo planes, was gearing up to bring emergency supplies to the Keys.

Many streets were flooded in downtown Miami and other cities.

In downtown Miami, two of the two dozen construction cranes looming over the skyline collapsed in the wind. A third crane was reported down in Fort Lauderdale. No injuries were reported.

A Miami woman who went into labor was guided through delivery by phone when authorities couldn't reach her because of high winds and street flooding. Firefighters later took her to the hospital.

An apparent tornado spun off by Irma destroyed six mobile homes in Palm Bay, midway up the Atlantic coast. Flooding was reported along Interstate 4, which cuts across Florida's midsection.

Curfews were imposed in Miami, Tampa, Fort Lauderdale and much of the rest of South Florida, and some arrests of violators were reported. Miami Beach barred outsiders from the island.

Fort Lauderdale police arrested nine people they said were caught on TV cameras looting sneakers and other items from a sporting goods store and a pawn shop during the hurricane.

More than 3.3 million homes and businesses across the state lost power, and utility officials said it will take weeks to restore electricity to everyone.

While Irma raked Florida's Gulf Coast, forecasters warned that the entire state was in danger because of the sheer size of the storm.

In one of the largest U.S. evacuations, nearly 7 million people in the Southeast were warned to seek shelter elsewhere, including 6.4 million in Florida alone.

About 30,000 people heeded orders to leave the Keys as the storm closed in, but an untold number refused, in part because, to many storm-hardened residents, staying behind in the face of danger is a point of pride.

John Huston, who stayed in his Key Largo home, watched his yard flood even before the arrival of high tide.

"Small boats floating down the street next to furniture and refrigerators. Very noisy," he said by text message. "Shingles are coming off."

Irma made landfall just after 9 a.m. at Cudjoe Key, about 20 miles (32 kilometers) outside Key West. During the afternoon, it rounded Florida's southwestern corner and hugged the coast closely as it pushed toward Naples, Sanibel, Fort Myers and, beyond that, Sarasota, at 14 mph (23 kph).

Forecasters warned some places could see a storm surge of up to 15 feet (5 meters) of water.

Gretchen Blee, who moved with her husband to Naples from Long Island, New York, after Superstorm Sandy in 2012 heavily damaged their beach home, took cover in a hotel room as Irma raged.

Some 400 miles (640 kilometers) north of the Keys, people in the Tampa-St. Petersburg area started bracing for the onslaught. The Tampa Bay area, with a population of about 3 million, has not taken a direct hit from a major hurricane since 1921.

"I've been here with other storms, other hurricanes. But this one scares me," Sally Carlson said as she snapped photos of the waves crashing against boats in St. Petersburg. "Let's just say a prayer we hope we make it through."

Along the Gulf Coast, two manatees became stranded after Hurricane Irma sucked the water out of Sarasota Bay, in Florida's Manatee County. Several people posted photos of the mammals on Facebook amid reports rescuers were able to later drag them to deeper water.

After leaving Florida, a weakened Irma is expected to push into Georgia, Alabama, Mississippi, Tennessee and beyond. A tropical storm warning was issued for the first time ever in Atlanta, some 200 miles (320 kilometers) from the sea.

"Once this system passes through, it's going to be a race to save lives and sustain lives," Federal Emergency Management Agency chief Brock Long said on "Fox News Sunday."

Florida's governor activated all 7,000 members of the Florida National Guard, and 10,000 guardsmen from elsewhere were being deployed.

Irma at one time was the most powerful hurricane ever recorded in the open Atlantic, a Category 5 with a peak wind speed of 185 mph (300 kph), and its approach set off alarm in Florida.

For days, forecasters had warned Irma was taking dead aim at the Miami area and the rest of the state's Atlantic coast. But then Irma made a more pronounced westward shift — the result of what meteorologists said was an atmospheric tug-of-war between weather systems that nudged Irma's crucial right turn into Florida's Gulf Coast.
___
Associated Press writers Seth Borenstein in Washington; Tamara Lush in St. Petersburg; Terry Spencer in Palm Beach County; Gary Fineout in Tallahassee; Terrance Harris and Claire Galofaro in Orlando; and Jason Dearen and David Fischer in Miami contributed to this report.
___
HURRICANE NEWSLETTER — Get the best of the AP's all-formats reporting on Irma and Harvey in your inbox: http://apne.ws/ahYQGtb