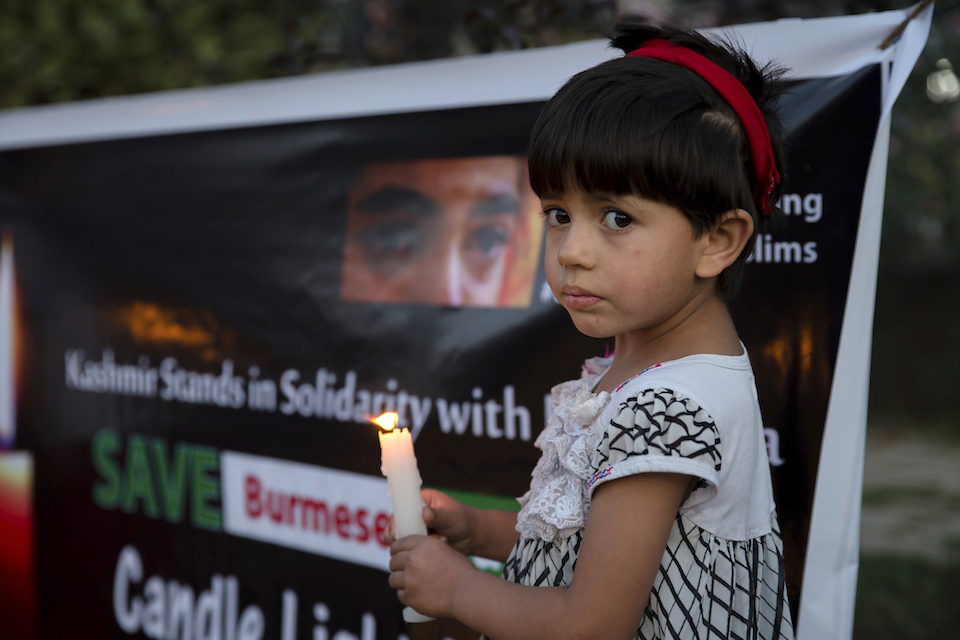 COX'S BAZAR, Bangladesh (AP) — The United States Holocaust Memorial Museum says it's horrified by the ongoing attacks on Rohingya civilians and is calling on Myamar's government to cease its military operations.

Cameron Hudson, director of the museum's Simon-Skjodt Center for the Prevention of Genocide, says "government efforts to deny Rohingya citizenship rights, restrict their freedom of movement and the practice of their faith, and deny their basic human rights have all been identified as leading precursors to a genocide."

In 2012, the museum awarded Myanmar leader Aung San Suu Kyi the Elie Wiesel Award, its highest honor. Now, it says the ideals that she inspired "appear absent" in the defense of Rohingya.

The museum says it implores Suu Kyi to use her position in government and her "even more powerful voice to uphold those very ideals and work to stop the longstanding persecution and violence that threaten the very existence of Rohingya in Burma." 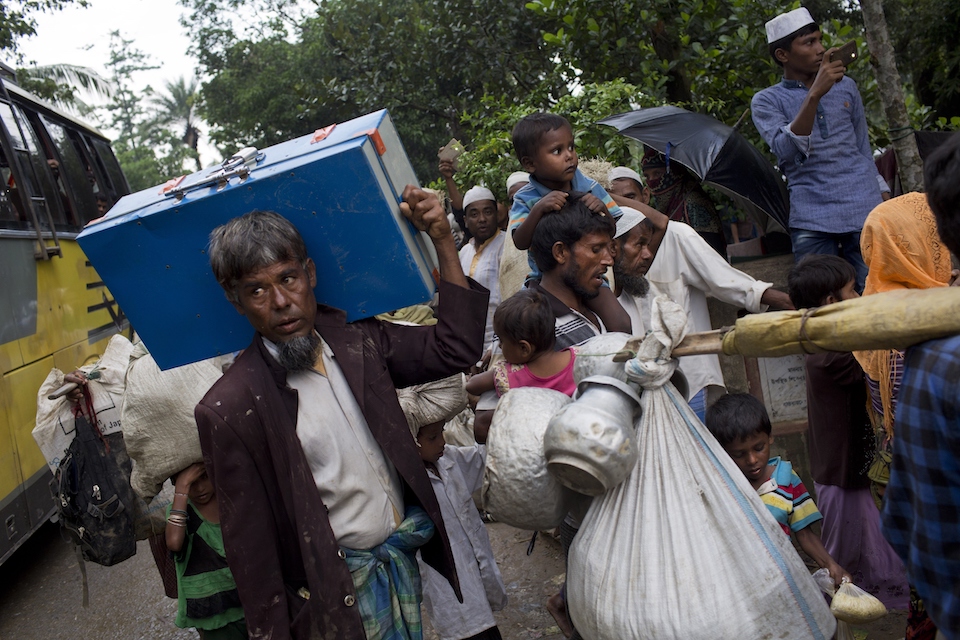 PHOTO: Myanmar's Rohingya ethnic minority refugees walk after crossing the Bangladeshi border near Cox Bazar's Kanjopara area Bangladesh, Sunday, Sept. 3, 2017. The U.N. refugee agency is reporting a surge in the number of Rohingya Muslims who have crossed into Bangladesh from Myanmar, with an estimated 270,000 arriving in the last two weeks. (AP Photo/Bernat Armangue, File)

The United Nations says the U.N. and its partners have a plan to provide up to 300,000 Rohingya Muslims fleeing from Myanmar to Bangladesh with food, shelter, water, health care and other services until the end of the year.

U.N. spokesman Stephane Dujarric told reporters at U.N. headquarters on Friday that while many of the 270,000 Rohingyas who have fled violence in Rakhine state in the past two weeks initially arrived in Bangladesh by land, more are now making the journey by boat.

He said five U.N. agencies have teams in Cox's Bazar where the Rohingyas are arriving and the $7 million released from the U.N. emergency fund will allow the U.N. and its partners to those in desperate need of aid.

Dujarric said Secretary-General Antonio Guterres spoke to Myanmar's leader Aung San Suu Kyi on Wednesday and delivered the same message to her that he said publicly.

Gutteres told reporters Tuesday the government must end the "vicious cycle of violence" and immediately reverse its longstanding policy and give Rohingya Muslims either nationality or legal status so they can lead normal lives and freely move, find jobs, and get an education. 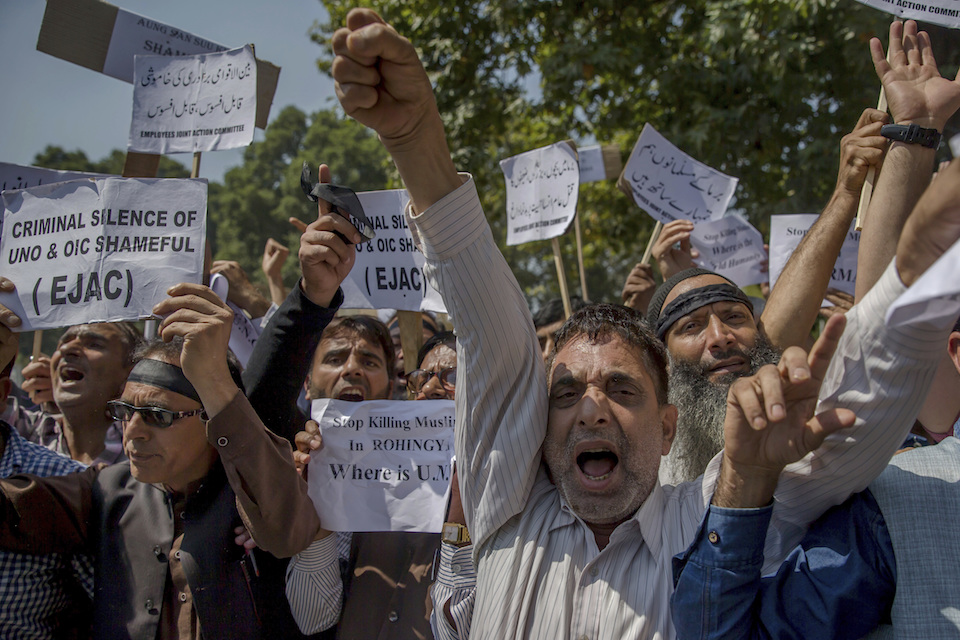 PHOTO: Kashmiri government employees shout slogans during a protest against the persecution of Myanmar's Rohingya Muslim minority in Srinagar, Indian controlled Kashmir, Friday, Sept. 8, 2017. The U.N. refugee agency said some 123,000 Rohingya refugees have fled to Bangladesh since violence erupted in Myanmar on Aug. 25, and that established refugee camps were now at "breaking point." (AP Photo/Dar Yasin

More than 1,500 supporters of an Islamist political party have rallied in Pakistan's capital to express solidarity with Myanmar's Rohingya Muslims.

The supporters of the Jamaat-e-Islami party demanded the expulsion of Myanmar's ambassador over violence against the Rohingya ethnic minority in his country.
The demonstrators wanted to march Friday to Myanmar's embassy in Islamabad, but authorities placed shipping containers on key roads, preventing them from reaching the building.

The head of Jamaat-e-Islami, Sirajul Haq, urged the Organization of Islamic Countries to pressure Myanmar to stop the violence against the Rohingya.

The violence began Aug. 25 when Rohingya insurgents attacked Myanmar police and paramilitary posts, and the military responded with "clearance operations." Many Rohingya homes were burned and an estimated 270,000 Rohingya fled to neighboring Bangladesh, according to the U.N. refugee agency.

A human-rights group has released satellite images showing about 450 buildings destroyed in mainly Rohingya neighborhoods of one of the larger towns in the region of Myanmar hit last month with ethnic violence.

The group's deputy Asia director, Phil Robertson, called on the Myanmar government to allow independent monitors into the area to investigate.

The Myanmar government says nearly 400 people have been killed since last month in fighting it blames on insurgents. Rohingya Muslims say Myanmar troops and Buddhist mobs attacked them and destroyed their villages. An estimated 270,000 Rohingya have fled to neighboring Bangladesh in just two weeks.

Turkish President Recep Tayyip Erdogan has promised more help for Rohingya Muslims who have fled to Bangladesh to escape violence in Myanmar, including the construction of refugee camps.

Erdogan said Friday that Turkey plans to build safer and more livable camps in Bangladesh if its government allows it.
Erdogan's wife and son, accompanied by the Turkish foreign minister, toured refugee camps in Bangladesh for minority Rohingya near the Myanmar border on Thursday.

Turkish humanitarian organizations have been assisting Rohingya Muslims fleeing across the border since violence flared in Buddhist-majority Myanmar two weeks ago. About 270,000 Rohingya have fled to Bangladesh, the U.N. refugee agency says.

Malaysian officials say they are bracing for a possible influx of Rohingya Muslim refugees because of renewed violence in Myanmar, and that any people arriving by boat will be treated humanely.

Recent violence in Myanmar's western Rakhine state has prompted 270,000 Rohingya to flee to neighboring Bangladesh, according to the U.N. refugee agency. It began when insurgents attacked Myanmar police and paramilitary posts and the military responded with "clearance operations." Many Rohingya homes have been burned.

Malaysia Maritime Enforcement Agency director-general Zulkifli Abu Bakar said there are no reports of new refugees heading to Malaysia but it is monitoring the country's waters closely.

Zulkifli said: "I won't say if we will accept or reject the boats. We will look at it on a case-to-case basis but this time, we will consider it more from a humanitarian angle."

Malaysia, which is already home to thousands of people from Myanmar, including 56,000 Rohingya, is cautious of being swamped by an influx of migrants.

In 2015, boats carrying Rohingya and Bangladeshi refugees were pushed back into international waters by the Malaysian and Thai navies. Later, more than 1,600 refugees were taken in by Indonesia and Malaysia. 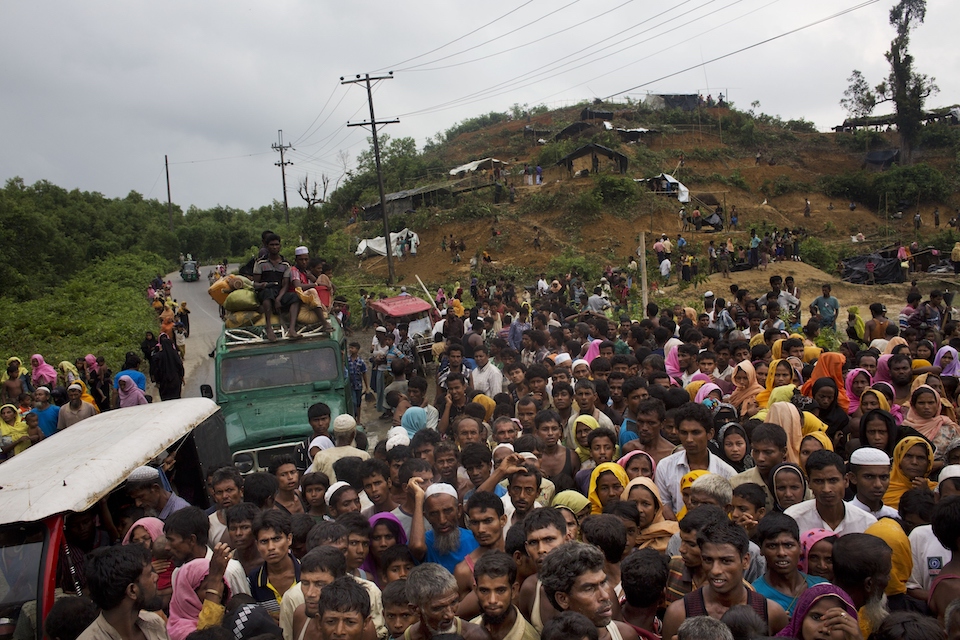 PHOTOS: Myanmar's Rohingya ethnic minority refugees scuffle for food rations distributed by Bangladeshi volunteers near Cox's Bazar's Gundum area, Bangladesh, Sept. 3, 2017. The U.N. refugee agency is reporting a surge in the number of Rohingya Muslims who have crossed into Bangladesh from Myanmar, with an estimated 270,000 arriving in the last two weeks. (AP Photo/Bernat Armangue, File)

Thousands of Muslims in the Indian-controlled portion of Kashmir have held rallies in solidarity with Myanmar's Rohingya Muslim minority despite a curfew in some parts of the disputed region's main city aimed at preventing the protests.

Rallies occurred in many places in Kashmir on Friday calling for the end of violence against Rohingya in Myanmar.

Separatist leaders who challenge India's sovereignty over Muslim-majority Kashmir urged residents to protest after Friday congregational prayers in solidarity with the Rohingya.
The U.N. refugee agency is reporting that 270,000 Rohingya have crossed from Myanmar into Bangladesh to flee violence that began two weeks ago when Rohingya insurgents attacked police posts, prompting the military to respond with "clearance operations."

Thousands of Indonesian Muslims have held a rally near Borobudur, one of the world's famed Buddhist monuments, to condemn violence in Myanmar against minority Rohingya Muslims.

Authorities barred protesters at the "Defend Rohingya" rally from entering Borobudur on the Indonesian island of Java, saying there was no connection between events in Buddhist-majority Myanmar and the Buddhist temple complex that was built in the 8th and 9th centuries.

Protesters held Friday prayers at a mosque near the World Heritage site and a rally afterward at which speakers railed against Myanmar's government.

The U.N. says about 270,000 Rohingya have fled across the border into Bangladesh since Aug. 25 to escape a military crackdown that followed attacks by Rohingya insurgents.

Protests were also held in the Indonesian capital, Jakarta, and other cities.

The U.N. refugee agency is reporting a surge in the number of Rohingya Muslims who have crossed into Bangladesh from Myanmar, with an estimated 270,000 arriving in the last two weeks.

The new number confirmed Friday by UNHCR spokeswoman Vivian Tan marks a major increase from the 164,000 estimated Thursday to have arrived since Aug. 25.

The exodus began after Rohingya insurgents attacked police posts, prompting the military to respond with "clearance operations" to root out any fighters hiding in villages of Rakhine state.

Journalists have reported seeing village homes burning as recently as Thursday in the region of Buddhist-majority Myanmar.