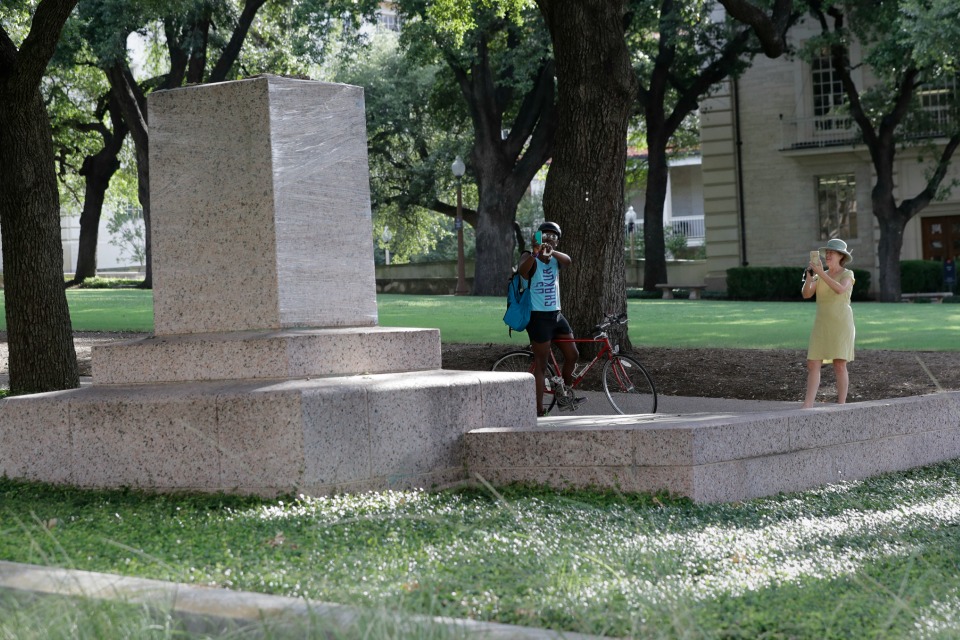 With a new school year dawning, education officials are grappling with whether to remove the names, images and statues of Confederate figures from public schools — especially since some are now filled with students of color.

The violence at a white nationalist rally over a Robert E. Lee statue in Charlottesville, Virginia, is giving school officials a new reason to reconsider whether it's appropriate for more than 100 schools to be named after Confederate generals and politicians from the Old South.

"It does not make sense to have schools named after individuals who were directly connected to that dark past, and force kids in Dallas, a majority minority population, to walk into these schools every day and have to face this past every single day," said Miguel Solis, former board president and current board member of the Dallas Independent School District.

But the reviews gained momentum after the Aug. 12 protest by white supremacists in Charlottesville, which left one counter-protester dead.

"We don't tolerate hate or discrimination of any form, and we are committed to providing an educational environment where all students can feel safe and welcomed at school," said Superintendent Aurora Lora in Oklahoma City, where there are four schools named after Confederate generals.

"We want to think about the people our buildings are named after and whether they represent the values we as a district have at this time," Lora said.

According to the Southern Poverty Law Center, there are at least 109 public schools named after Robert E. Lee, Jefferson Davis or other Confederate icons in the United States.  Of those, "27 have student populations that are majority African-American, and 10 have African-American populations of over 90 percent," according to the SPLC's 2016 report.

Several school names were changed, or new schools were built and named after Confederates "during the era of white resistance to equality," the SPLC report said.

Solis said he has support for his effort to change school names in Dallas, but "that's not to say that there haven't been people who have been very upset because they believe either the history needs to be preserved, or they align the philosophy of the Confederacy or neo-Nazis."

The South has the majority of Confederate-named public schools in the country.

In Falls Church, Virginia, the school board has voted to rename J.E.B. Stuart High School. Stuart was a slaveholding Confederate general who was mortally wounded in an 1864 battle.  In Montgomery, Alabama, the school board is looking at moving Lee's statue from the front of majority-black Robert E. Lee High School.

In Arlington, Virginia, Robert E. Lee's hometown, there is a move now to rename Washington-Lee High School. "It is time to talk about the values these names reflect and the messages we are sending to our children,"  Barbara Kanninen, Arlington school board chair, said in a statement.

At some schools, the push for change starts with the students. In Greenville, South Carolina, student Asha Marie started a Change.org petition to rename Wade Hampton High School.  Hampton was a Confederate cavalry commander during the Civil War and was later elected governor of South Carolina and criticized the Reconstruction era which put black leaders in political office.

"Racism, bigotry, and a blatant lack of patriotism," she wrote in her petition. "These are not values of South Carolinians and should not continue to be enshrined in a place of learning."

At others, alumni and outsiders are the ones sounding the call.

The debate over the Stuart name change in Falls Church kicked off in earnest in 2015 when actress Julianne Moore, who attended Stuart in the '70s, and Hollywood producer Bruce Cohen, a Stuart alumnus, launched a petition demanding the name change. In Alabama, it was a community activist who suggested moving the Lee statue out from in front of Robert E. Lee High School.

Changing a school's name is not cheap. In Oklahoma City, Lora said it could be $50,000 or more to change signage, letterhead, business cards and more for each school; Other school officials have quoted higher and lower figures.

"You can make any excuse you want to try and stop something like this and dollars are what a lot of people lead with," said Solis, who called it a "hollow argument."

Instead, people should get creative, he said, for example, in Texas possibly renaming schools currently named after Robert E. Lee after golfer Lee Trevino, allowing them to keep the "Lee" identity.

In Arlington, there has been some talk among some at Washington-Lee High School about possibly changing Robert E. Lee out of the school name to be replaced by his father, Revolutionary War Major-General Henry "Light-Horse Harry" Lee, who also was a Virginia governor and congressman, unofficial school historian John Peck said. Or perhaps rededicating the school to an ideal and de-emphasizing the namesakes, he said.

"Keep the names, but take the namesakes out," said Peck, who said the school's basketball team was the first integrated team to win Virginia's state basketball title in 1966. "Take Washington out, take Lee out. They don't seem to mean all that much to the alumni who really, really cherish the school's legacy itself as built up by the students and the faculty over the years."