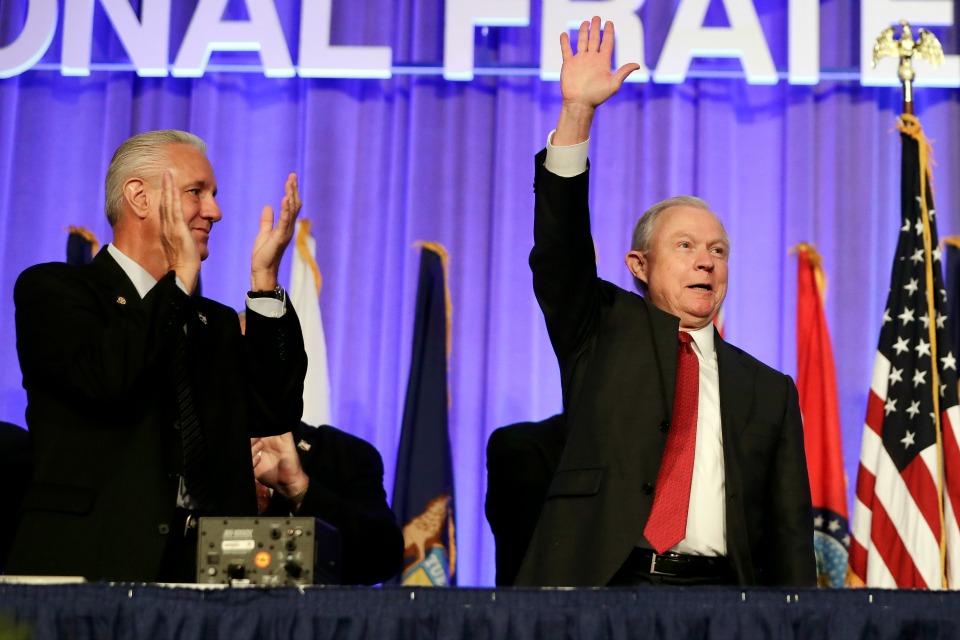 President Barack Obama had sharply curtailed the program in 2015 amid an outcry over the heavily-armed police response to protesters after several police killings of black men in Ferguson, Missouri and other cities. The Trump administration maintains the program is needed to protect public safety and support state and local police.

Restoring the program will "ensure that you can get the lifesaving gear that you need to do your job," Attorney General Jeff Sessions told a cheering crowd at a national convention of the Fraternal Order of Police in Nashville, Tennessee. The group, America's largest organization of rank-and-file officers, endorsed Trump for president after he promised to revamp the program.

Sessions said restrictions imposed by Obama went too far. "We will not put superficial concerns above public safety," he said.

In issuing the order, Trump is fulfilling a campaign pledge made as he depicted crime as rampant and police forces undercut by unfair criticism, with Obama failing to support them sufficiently. Trump, feeling increasingly under attack in recent weeks, has been doubling down on appeals to core supporters. Last week, he pardoned the controversial former Arizona sheriff Joe Arpaio, who had been found guilty of defying a judge's order to stop racially profiling Latinos.

Sessions has been steadily restoring tough-on-crime policies while reshaping the way his Justice Department enforces civil rights law, particularly in the areas of policing, in ways that have made advocates nervous.

Civil liberties groups and some lawmakers assailed Trump's order as a sign of the militarization of local police, arguing that the equipment encourages and escalates violent confrontations with officers.

"Tensions between law enforcement and communities remain high, yet the president and the attorney general are giving the police military-grade weaponry instead of practical, effective ways to protect and serve everyone," said Kanya Bennett, legislative counsel for the American Civil Liberties Union.

Republican Sen. Rand Paul of Kentucky called the plan a dangerous expansion of government power that would "subsidize militarization." Another Republican, Rep. Mark Sanford of South Carolina, said the program "incentivizes the militarization of local police departments, as they are encouraged to grab more equipment than they need."

But in Newberry County, South Carolina, Sheriff Lee Foster said his department wouldn't be able to afford equipment like night-vision goggles or ballistic helmets on its own. His deputies wouldn't need body armor or riot shields daily, he said, but the items could save their lives in a rapidly unfolding situation.

"I don't know of any police officer that would roam around with a Kevlar helmet on his head during routine situations," Foster said. "The right to have access to this stuff doesn't mean you've militarized your agency."

Congress authorized the program in 1990, allowing police to receive surplus equipment to help fight drugs, which then gave way to the fight against terrorism. Agencies requested and received everything from camouflage uniforms and bullet-proof vests to firearms, bayonets and drones. More than $5 billion in surplus equipment has been given to agencies.

Obama put limits on the program in 2015, partly triggered by public outrage over the use of military gear during protests in Ferguson, Missouri, following the shooting death of 18-year-old Michael Brown. Police responded in riot gear and deployed tear gas, dogs and armored vehicles. At times, they also pointed assault rifles at protesters. The Justice Department under then-Attorney General Eric Holder blamed the militarized response for exacerbating tensions with the community.

That frustrated some law enforcement groups who see the gear as needed to protect officers responding to active shooter calls and terrorist attacks. An armored vehicle played a key role in the police response to the December 2015 mass shooting in San Bernardino, California.

The Defense Logistics Agency, which manages the program, recalled at least 138 grenade launchers, more than 1,623 bayonets and 126 tracked vehicles — those that run on continuous, tank-like tracks instead of wheels. The agency declined to comment Monday, saying it had not yet received information on the order.

The new order largely lets local agencies set their own controls and rules governing use of the equipment.

The plan to restore access to military equipment comes after Sessions has said he intends to pull back on court-enforceable plans to resolve allegations of pervasive civil rights violations. Sessions they can malign entire agencies and make officers less aggressive on the street.

He has also revived a widely criticized form of asset forfeiture that lets local police seize cash and property with federal help.