AP Factcheck: President Trump Does What he Accuses Media of Doing 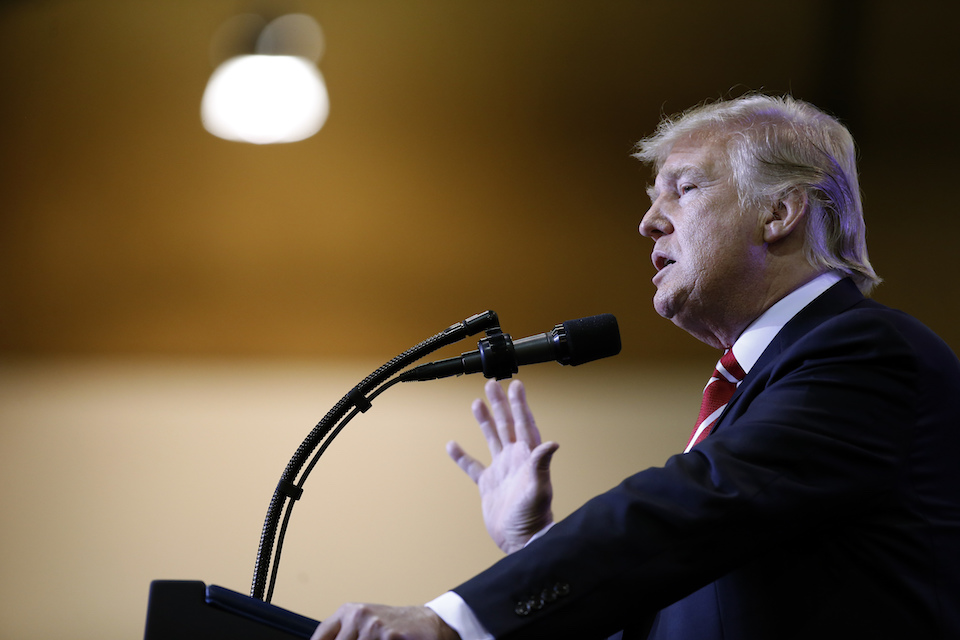 NEW YORK (AP) — President Donald Trump accused the media of selectively quoting from his remarks about the race-fueled violence in Charlottesville, Virginia, to create a misimpression that he had not unequivocally denounced racist conduct.

Then the president turned around and did the same thing himself: At a Tuesday night rally in Phoenix, the president re-read portions of his comments about the violence — but left out the specific phrase that generated all the controversy.

In that statement, which Trump uttered in the hours after the Aug. 12 violence, the president said he condemned "in the strongest possible terms this egregious display of hatred, bigotry and violence, on many sides. On many sides."

But when Trump read the statement again in Arizona, he left out "many sides."

Trump was at his golf club in New Jersey during a 17-day working vacation when the violence erupted in Charlottesville, claiming the life of one anti-racist protester who was hit by a car driven by a man who attended the white supremacist demonstrations.

The president was slated to give remarks about veterans' reforms but instead began by speaking about the clash.

Here is what he said:

"We're closely following the terrible events unfolding in Charlottesville, Virginia. We condemn in the strongest possible terms this egregious display of hatred, bigotry and violence, on many sides. On many sides. It's been going on for a long time in our country. Not Donald Trump, not Barack Obama. This has been going on for a long, long time. It has no place in America.

What is vital now is a swift restoration of law and order and the protection of innocent lives. No citizen should ever fear for their safety and security in our society, and no child should ever be afraid to go outside and play, or be with their parents, and have a good time."

That statement swiftly triggered an avalanche of bipartisan denunciation. Many critics believed that by saying "many sides," Trump was trying to blame both the white supremacists and the counter-protesters for the violence, instead of singling out hate groups like the KKK and neo-Nazis for condemnation.

The president only explicitly criticized the hate groups two days later, during a second statement at the White House.

He declared that "racism is evil" and said "those who cause violence in its name are criminals and thugs, including the KKK, neo-Nazis, white supremacists, and other hate groups that are repugnant to everything we hold dear as Americans."

But Trump chafed at having to deliver the amended statement, telling those close to him that he felt that his original version had effectively condemned what he saw were agitators on both sides of the protests. The next day, during a news conference in New York, he reverted to his original stance, declaring that "there's blame on both sides."

"If you look at both sides — I think there's blame on both sides. And I have no doubt about it, and you don't have any doubt about it either," Trump said Aug. 15 during a combative news conference with reporters in the lobby of Trump Tower. He declared that "you also had people that were very fine people, on both sides," which critics interpreted as him praising those who marched with neo-Nazis and white supremacists.

The president, after delivering opening remarks calling for national unity, used much of his rally Tuesday in Arizona to deliver broadsides against the media.

Still angry about how his initial statement was covered, he told the crowd that he wanted to "show you how damned dishonest these people are."

The crowd cheered the president and then booed the media. But Trump, in his retelling of his initial statement, omitted the line "on many sides" that had drawn so much criticism.

And he wasn't done. Repeating himself frequently, Trump re-read his original statement and then again revisited the one he had delivered from the White House two days later.

He faithfully quoted from that one, including his explicit rebukes of the KKK, neo-Nazis and white supremacists, and again accused the media of being biased against him.

"Now let me ask you, can it be any better than that, in all fairness?" Trump asked the crowd.

He then suggested that the media claimed he was "a racist" and that his statement "should have been sooner."

He then revisited his Trump Tower news conference and, once more, only focused on the original statement: his condemning "in the strongest possible terms this egregious display of hatred, bigotry and violence. It has no place in America."

But, again, Trump did not repeat the phrase that drew criticism from Republicans and Democrats alike and prompted several of his advisory boards to disband in protest. While quoting himself, Trump did not mention his remark that "there's blame on both sides."