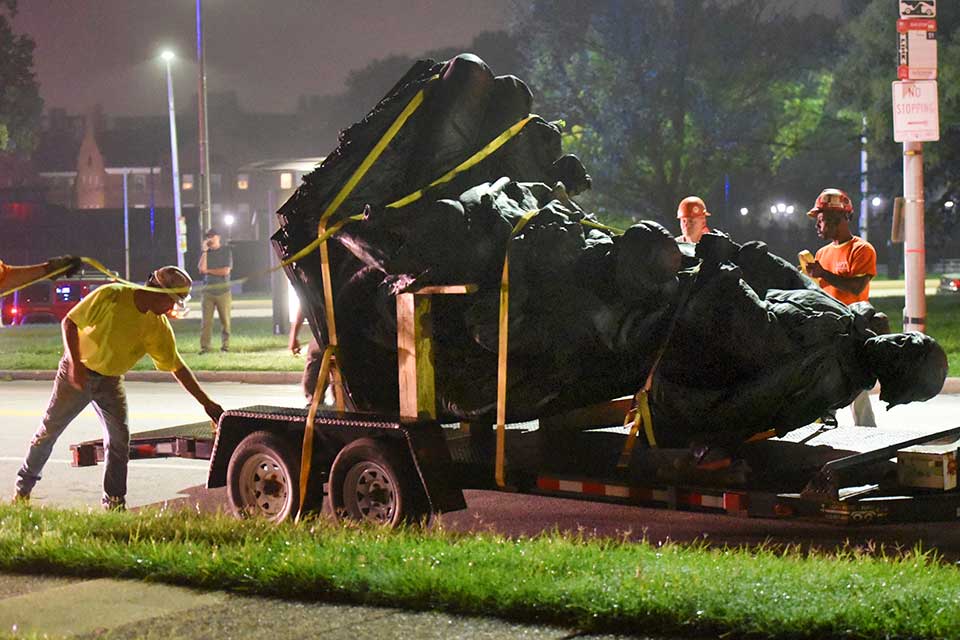 BALTIMORE (AP) — Baltimore Mayor Catherine Pugh has a few words of advice for leaders in other cities who might want to get rid of Confederate monuments: "Do it quietly and quickly."

On Tuesday Pugh ordered four statues in Baltimore removed under the cover of night. In the morning, city residents awoke to empty marble plinths.

Pugh made the decision Tuesday morning to remove the monuments that night in order to avoid attention.

"It was important that we move quickly and quietly," Pugh said, "and that's what we did."

Elliott Cummings, a member of the Maryland Sons of Confederate Veterans, denounced Pugh's "barbarism and Taliban-esque actions" in tearing down the statues. "I'm angry and very sad at the same time."

Cummings also said he doesn't think the city followed proper protocols, which would have included getting approval from the Maryland Historical Trust to remove the monuments.

John Coleman, public information officer for the Trust, said in a statement that while "the formal process of removing the monuments was not followed, due to the rapidly evolving circumstances MHT will work with the city on the relocation, restoration or preservation, etc., decided in accordance with the current easements."

Workers used cranes to lift the towering monument to Robert E. Lee and Thomas J. "Stonewall" Jackson onto a flatbed truck in the dark.

"I did what was right for my city," Pugh said. "Any city that has Confederate statues has concern about violence occurring in their city."

Social justice activists in Baltimore had pledged to take the statues down themselves on Wednesday evening. Protesters in Durham, North Carolina, toppled a monument to Confederate veterans on Monday night.

Statues Removed in Other Cities

Meanwhile, in Los Angeles, a stone monument at Hollywood Forever Cemetery commemorating Confederate veterans was taken down Wednesday after hundreds of people demanded its removal.

And in Annapolis, three of the four members of the State House Trust voted Wednesday to remove another statue of Taney from the State House grounds, according to Doug Mayer, a spokesman for Republican Gov. Larry Hogan, and Alexandra Hughes, chief of staff to Maryland House Speaker Michael Busch. It was not immediately clear when the removal will take place.

Baltimore's swift removal of its monuments comes days after what's believed to be the largest gathering of white supremacists in a decade — including neo-Nazis, skinheads and Ku Klux Klan members. They descended on Charlottesville for a rally prompted by the city's decision to remove a monument to Lee.

Violent clashes broke out between white nationalists and counter protesters and a woman, 32-year-old Heather Heyer, was killed when a car plowed into a crowd of people who were there to condemn the white nationalists.

Jamye Wooten, an activist and organizer, said removing the statues is a good start, but there is much more work to be done.

"I'm much more concerned with the systems and institutional structures of white supremacy than the symbols," he said in an email Wednesday, "but when I read a post by a dear sister friend on Facebook this morning expressing her relief that she would no longer have to walk past the Confederate monument in her neighborhood - that gave me a moment of joy."

Greg Baranoski was walking his dog in Baltimore's Mt. Vernon neighborhood just after midnight on Wednesday morning when he saw a crew taking down the Taney statue. It took about 40 minutes, he said.

"It was the fastest thing I've ever seen the city do," he said. "It was amazing, really amazing."

Baranoski said that until recently, he admired the monuments as pieces of art even though he didn't agree with "what they stood for." But he said in the past few days, he's come to believe that the monuments should be removed.

"It'd be super poetic to replace the statue of Chief Justice Taney with Justice Marshall," he said.