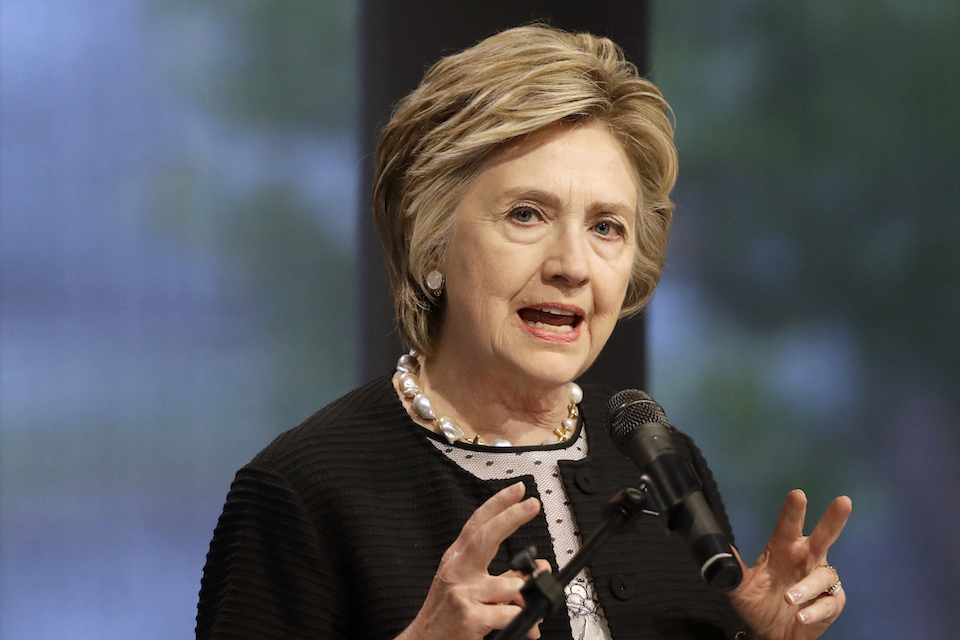 WASHINGTON (AP) — Democrat Hillary Clinton lost the 2016 election to President Donald Trump, but some Republicans in Congress are intensifying their calls to investigate her and other Obama administration officials.

As investigations into Russian meddling and possible links to Trump's campaign have escalated on both sides of the Capitol, some Republicans argue that the investigations should have a greater focus on Democrats.

Democrats who have pushed the election probes "have started a war of investigative attrition," said GOP Rep. Steve King of Iowa, a member of the House Judiciary Committee.

Several officials from former President Barack Obama's administration and Clinton's campaign have appeared before or been interviewed by the House and Senate Intelligence Committees as part of the Russia investigation, along with Trump campaign officials.

The GOP-led committees are investigating whether Trump's campaign had any links to Russian interference in last year's election.

The chairman of the House Intelligence Committee, Rep. Devin Nunes, R-Calif., has continued a separate investigation into whether Obama administration officials inappropriately made requests to "unmask" identities of Trump campaign officials in intelligence reports.

The House Judiciary Committee, which has declined to investigate the Russian meddling, approved a resolution this past week to request documents related to the FBI's now-closed investigation of Clinton's emails.

In addition, Republican on that committee wrote the Justice Department on Thursday and asked for a second special counsel, in addition to Special Counsel Robert Mueller, to investigate "unaddressed matters, some connected to the 2016 election and others, including many actions taken by Obama administration."

"The American public has a right to know the facts — all of them — surrounding the election and its aftermath," the lawmakers wrote.

Republicans want to investigate the unmasking issue and also Clinton's email scandal that figured prominently in the campaign.

They also frequently bring up former Attorney General Loretta Lynch, and former FBI Director James Comey's testimony that she told him to call the Clinton email investigation a "matter" instead of an investigation during the campaign.

Nunes wrote his own letter to Director of National Intelligence Dan Coats last week, saying that his committee has learned that one Obama administration official had made "hundreds" of the unmasking requests.

Even though he remains committee chairman, Nunes stepped back from the Russia investigation earlier this year after he was criticized for being too close to the White House. Rep. Mike Conaway, R-Texas, took over the leading role.

The committee has conducted bipartisan interviews of witnesses; Trump son-in-law Jared Kushner appeared on Tuesday, a day after talking to Senate staff. But partisan tensions have been evident.

GOP Rep. Pete King of New York, who's on the House Intelligence Committee, said after the Kushner interview that the committee investigation into Russian meddling is a "sham."

"To me there is nothing to this from the beginning," he said of his committee's own probe.

"There is no collusion ... it's the phoniest investigation ever."

Both the Senate and House committees have interviewed or expressed interest in interviewing a series of Democratic witnesses, including Obama's former national security adviser, Susan Rice, and former U.N. Ambassador Samantha Power — both of whom Republicans have said may be linked to the unmasking.

Rice met with staff on the Senate Intelligence Committee earlier this month, and Power met with the panel Friday.

"Ambassador Power strongly supports any bipartisan effort to address the serious threat to our national security posed by Russia's interference in our electoral process, and is eager to engage with the Senate and House committees on the timeline they have requested," Power's lawyer, David Pressman, said in a statement.