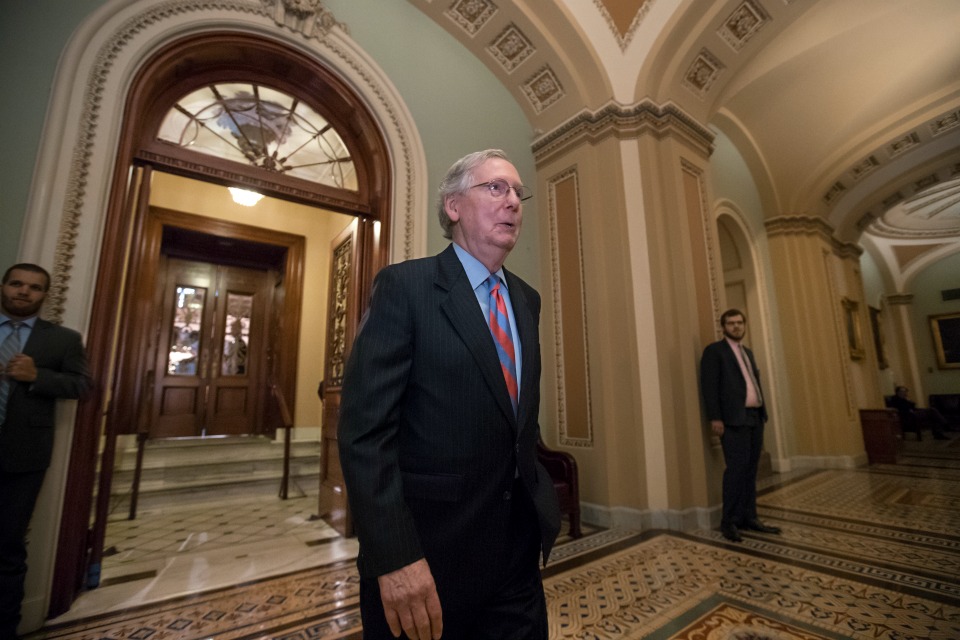 WASHINGTON (AP) — Republican finger-pointing commenced Friday after the Senate's dark-of-night defeat of the GOP's effort to repeal much of the Obama health care law, a startling vote that dealt a blow to President Donald Trump.

"3 Republicans and 48 Democrats let the American people down," Trump tweeted early Friday after GOP leaders failed to patch party divisions and the Senate rejected a last-ditch bill to keep the effort alive. "As I said from the beginning, let ObamaCare implode, then deal. Watch!"

The "skinny repeal" bill — erasing several parts of President Barack Obama's law — was rejected just before 2 a.m. EST on a vote of 51-49.

All Democrats were joined by GOP Sens. Susan Collins of Maine, Lisa Murkowski of Alaska and the ailing John McCain. The 80-year-old Arizona senator made a dramatic return to the Capitol Tuesday after being diagnosed with brain cancer to cast a decisive procedural vote that for a time had advanced the legislation.

Following rejection of two broader GOP repeal plans earlier in the week, the early Friday vote cast doubt on whether divided Senate Republicans can advance any health bill despite seven years of promises to repeal "Obamacare."

House leaders had no hesitation about blaming the Senate for the collapse of one of the GOP's paramount priorities. In a statement, Speaker Paul Ryan, R-Wis., pointedly said "the House delivered a bill" and said he was "disappointed and frustrated." Nearly three months earlier, the House approved its health care package after several embarrassing setbacks.

He added, "But we should not give up. I encourage the Senate to continue working toward a real solution that keeps our promise."

Underscoring the House's view of where the fault lie, leaders opened a morning meeting of the chamber's GOP lawmakers by playing audio of Gordon Lightfoot's "The Wreck of the Edmund Fitzgerald," which recounts the 1975 wreck of a freighter in Lake Superior. Several lawmakers said House deputy whip Patrick McHenry, R-N.C., told them the song was meant as a reference to the Senate.

One moderate Republican said Trump shared responsibility for the bill's breakdown. "One of the failures was the president never laid out a plan or his core principles and never sold them to the American people," said Rep. Charlie Dent, R-Pa. "Outsourced the whole issue to Congress."

The measure defeated Friday would have repealed an Obama mandate that most people get health insurance and would have suspended a requirement that larger companies offer coverage to their employees. It would have also suspended a tax on medical devices and denied federal payments to Planned Parenthood for a year.

"This is clearly a disappointing moment," Senate Majority Leader Mitch McConnell, R-Ky, said. "I regret that our efforts were not enough this time."

"It's time to move on," he said. McConnell put the health bill on hold and announced that the Senate would move onto other legislation next week.

Conservative Rep. Mo Brooks, R-Ala., who's running for a vacant Senate seat, suggested it was time for McConnell to relinquish his post.

"If they're going to quit, well then by golly, maybe they ought to start at the top with Mitch McConnell leaving his position and letting somebody new, somebody bold, somebody conservative take the reins," Brooks said on CNN. He added, "How is he going to get the job done on the rest of President Trump's agenda?"

The amendment was a last resort for Senate Republicans to pass something — anything — to trigger negotiations with the House.

Health and Human Services Secretary Tom Price said in a statement that the Trump administration would pursue its health care goals through regulation. "This effort will continue," Price said. But insurers, hospitals, doctors, and consumer groups are pressing the administration to guarantee billions of dollars in disputed subsidies to help stabilize insurance markets around the country.

Buoyed by a signal from Ryan, McConnell had introduced a pared-down health care bill late Thursday that he hoped would keep alive Republican ambitions to repeal "Obamacare."

The Congressional Budget Office said the measure would have increased the number of uninsured people by 16 million, the same problem that vexed all the "repeal and replace" measures Republicans have offered. Obama's law extended coverage to some 20 million people, reducing the nation's uninsured rate to a historic low of around 9 percent.

Still, Ryan had seemingly opened a path for McConnell earlier Thursday by signaling a willingness to negotiate a more comprehensive bill with the Senate. Some Republican senators had been concerned that the House would simply pass McConnell's "skinny bill" and send it to Trump. That would have sent a shock wave through health insurance markets, spiking premiums.

Ryan sent senators a statement saying that if "moving forward" requires talks with the Senate, the House would be "willing" to do so. While Sen. Lindsey Graham, R-S.C., eventually said he was reassured by Ryan's statement, McCain remained unconvinced.

Numerous polls had shown little public support for the GOP's earlier proposals to repeal and replace Obama's law. A recent AP-NORC poll found only 22 percent of the public backing the Republican approach, while 51 percent were opposed.