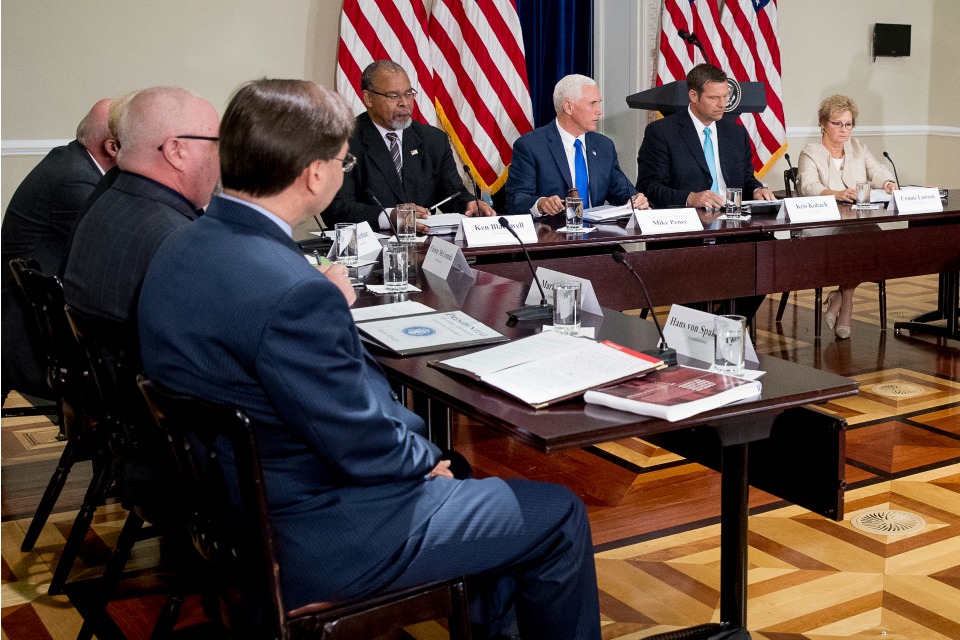 WASHINGTON (AP) — President Donald Trump on Wednesday urged members of his new voter fraud commission to approach their task with "a very open mind," despite having spent months making unfounded claims, without evidence, that millions of fraudulent ballots had been cast against him.

Speaking at the first meeting of the Presidential Advisory Commission on Election Integrity, Trump also questioned the motives of states that have refused to comply with the commission's request for extensive personal voter information, suggesting they had something to hide.

"If any state does not want to share this information, one has to wonder what they're worried about," he said. "There's something. There always is."

Meanwhile, Kris Kobach, the vice chair of the commission, said in an interview with MSNBC that "we may never know" whether Trump's 2016 rival Hillary Clinton really won the popular vote.

"We will probably never know the answer to that question, because even if you could prove that a certain number of votes were cast by ineligible voters, for example, you wouldn't know how they voted," said Kobach, who is also Kansas's Secretary of State.

Trump won the Electoral College by a comfortable margin, but Clinton won the popular vote by nearly 2.9 million votes.

Even before their first meeting, the commission had drawn outrage over a request to each state for reams of personal voter information, including voter names, voting histories and party affiliations. Aides to Vice President and commission chair Mike Pence said they only asked for information that was already publicly available.

But at least 17 states, plus Washington, D.C. have rebuffed the request, citing privacy concerns and a fear that complying would legitimize the unproven idea that voter fraud is widespread. The requests have also sparked multiple lawsuits.

Critics see the commission as part of a conservative campaign to strip minority voters and poor people from the voter rolls, and to justify unfounded claims made by a president who was angry about losing the popular vote. They also wonder why the White House appears more concerned over widely-discredited allegations of large-scale voter fraud than the intelligence community's conclusion that Russia meddled in the 2016 campaign.

But Trump said the commission would address serious concerns he heard from voters again and again.

"Throughout the campaign and even after, people would come up to me and express concerns about voter inconsistencies and voter irregularities which they saw, in some cases having to do with very large numbers of people in certain states," Trump said, adding: "All public officials have a profound responsibility to protect the integrity of the vote."

Trump convened the commission after claiming on Twitter and in meetings with lawmakers that voter fraud cost him the 2016 popular vote, despite past studies showing voter fraud is exceedingly rare.

"In addition to winning the Electoral College in a landslide, I won the popular vote if you deduct the millions of people who voted illegally," he tweeted in November, several weeks after his electoral victory. He also alleged at the time, without evidence, that there had been "serious voter fraud" in California, New Hampshire and Virginia and complained that the media wasn't covering it.

Trump continued to make the debunked claim after his inauguration, telling a group of bipartisan congressional leaders days after he took office that he would have won the popular vote if 3 million to 5 million immigrants living in the country illegally hadn't voted.

Nonetheless, Trump urged the commission members gathered in the Executive Office Building next to the White House to approach their task with an open mind.

"You will approach this important task with a very open mind and with no conclusions already drawn," he said. "You will fairly and objectively follow the facts wherever they may lead."

Pence echoed the message, saying the commission, which includes both Republicans and Democrats, would "perform a truly non-partisan service to the American people."

During their remarks, the commissioners repeatedly pointed to polls that show Americans have serious concerns about the integrity of the voting system — concerns that have been stoked by Trump and other Republicans for years.

Maine Secretary of State Matthew Dunlap said the commission would work "to reassure people that there are no goblins under the bed, and if there are," to "deal with them in a way that is balanced."

A September 2016 Associated Press-NORC Center for Public Affairs Research poll found that only 4 in 10 people polled expressed a lot of confidence in votes being counted accurately. Overall, 35 percent of those polled said there's was a great deal of voter fraud in American elections, 39 percent said there's only some and 24 percent said there's hardly any.

Concerns about voter fraud were much higher among Republicans.

But such fears are largely unfounded. While there have been isolated cases of people voting illegally and voter rolls often contain outdated data, there is no evidence voter fraud is a widespread problem in the United States or has impacted the election results.

A study by a Loyola Law School professor found that out of 1 billion votes cast in all American elections between 2000 and 2014, there were only 31 known cases of impersonation fraud.

The commissioners only made passing reference to what many see as a far greater threat to the integrity of the U.S. voting system: foreign intervention.

But Trump has repeatedly undermined their findings by voicing skepticism about Russia's role.