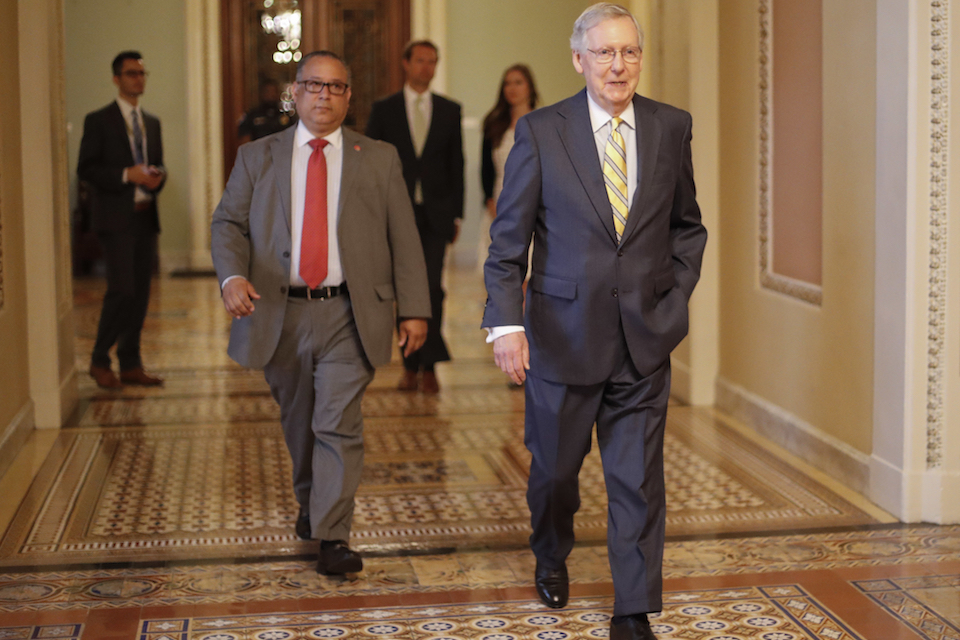 And there are potential unintended consequences for people with employer-provided insurance, currently about 170 million Americans.

The legislation would put limits on federal spending for Medicaid, a partnership program with states to cover low-income people, the disabled and nursing home residents.

The drawback is that state officials could eventually face no-win choices, such as having to pick between paying for coverage for low-wage working mothers and support services for elderly people trying to stay out of nursing homes.

As Senate Majority Leader Mitch McConnell, R-Ky., steers toward debate and votes next week, here is a look at some of the latest changes and major issues:

The new Senate bill incorporates the core of a proposal from Sen. Ted Cruz, R-Texas, that would reorganize the market for policies purchased by individuals. As many as 20 million Americans get coverage this way, about half through subsidized markets like HealthCare.gov, created under former President Barack Obama.

Under the Cruz approach, an insurer can offer plans that don't comply with such requirements, provided they also offer coverage that does. The problem, say critics, is that the healthy would flock to low-premium, skimpy plans, leaving the sick to face escalating prices for comprehensive coverage.

"Healthy people would have opportunities to buy lower-premium, skinnier plans, while people with pre-existing conditions not eligible for premium subsidies could find themselves priced out of insurance," said Larry Levitt of the nonpartisan Kaiser Family Foundation.

The latest bill includes another $70 billion to help states keep health insurance affordable for older, sicker customers. But it's not clear how those backstops would work, and the federal funding eventually would end.

Some insurers are worried because of a technical change with huge practical implications: Health plans that enroll healthier customers would no longer have to cross-subsidize those with sicker patients, as is currently required.

"We think it is unworkable," said Justine Handelman, top Washington lobbyist for the BlueCross BlueShield Association. She predicted skyrocketing costs for taxpayers also, stuck with the bill for sicker patients.

McConnell's new bill made a major change to tax-sheltered health savings accounts, which was also advocated by Cruz.

Under the bill, health savings accounts could be used to pay premiums with pre-tax money. Under current law, they can only be used to cover out-of-pocket costs, such as deductibles and copayments.

The change is meant to level the playing field for people buying individual plans, as compared to people getting employer coverage. The value of workplace insurance is tax-free for employees and tax-deductible for employers.

The upside is that the change might encourage more self-employed people to buy individual health insurance policies. The downside is that some employers may see it as an invitation to drop health benefits, particularly since the GOP also would repeal Obama's requirement that larger companies provide health care or face fines.

"Allowing individuals to purchase insurance with pre-tax dollars eliminates one of the advantages to employer-provided insurance," said Elizabeth Carpenter of the Avalere Health consulting firm. "That may lead some employers to consider whether or not they want to continue to offer health insurance."

THE POOR AND THE SICK

McConnell kept some of the Obama-era tax increases used by Democrats to finance expanded coverage. But the money will be going to shore up private insurance, not the Medicaid program. Medicaid accounts for half or more of the 20 million Americans gaining coverage as a result of the Affordable Care Act.

Medicaid covers low-income people, from many pregnant women and newborns, to disabled people and many elderly nursing home residents. The GOP bill would start by phasing out enhanced federal financing for Obama's Medicaid expansion, adopted by 31 states.

Perhaps more significantly, it would limit future federal funding for the overall program. As a result, it's estimated Medicaid would cover 15 million fewer people by 2026.

The bill would add $45 billion to help states confronting the opioid epidemic pay for treatment and recovery. But that hasn't swayed the American Medical Association, which points out that people in recovery also need comprehensive health insurance.

Republican governors don't like the Medicaid cuts, and some have been vocal. About half the states that expanded Medicaid now have GOP chief executives.

Nevada Gov. Brian Sandoval, a Republican who oversaw a Medicaid expansion, said more than 200,000 people gained coverage in his state.

"You think about 210,000 men, women and children, senior citizens, the drug addicted, the chronically ill," Sandoval said. "These are people that used to get their treatment in emergency rooms, if they got any treatment at all. I keep going back to the fact that they are living a better quality of life."