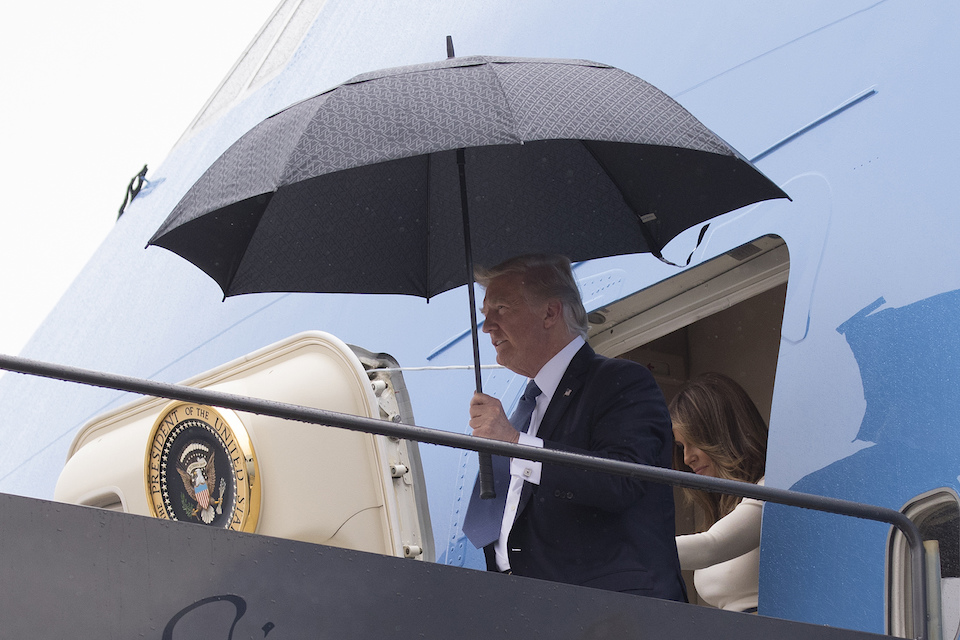 NEW YORK (AP) — As Air Force One flew home from Europe, news was set to break about a meeting that Donald Trump's eldest son had with a Kremlin-connected lawyer, promising yet another round of unwelcome headlines about the president and Russia. And that happened twice within a week.

The day-after-day drip-drip-drip of revelations over the past week about Donald Trump Jr.'s contact with the Russian lawyer in 2016 underscores the White House's inability to shake off the Russia story and close the book on a narrative that casts a shadow over Trump's presidency.

No matter how presidential Trump may have looked on his back-to-back trips to Europe in recent days, the persistent questions about connections between Trump's team and Russia prevent him from savoring a public relations victory and building momentum for his stalled legislative agenda.

"No successful crisis management model works the way they are doing things," said Lanny Davis, who worked as special counsel to President Bill Clinton during his impeachment hearings. "If your mission is to control a story or try to end a story, you need to tell it early, tell it all and tell it yourself."

Trump Jr.'s account of his Trump Tower meeting has seemingly changed on an almost daily basis. At first, the meeting was said to be about a Russian adoption program. Then, it was to hear information about campaign rival Hillary Clinton. Finally, Trump Jr. was forced to release emails — mere moments before The New York Times planned to do so — that revealed he had told an associate that he would "love" Russia's help in obtaining negative details about the Democratic nominee.

Even the number of people who attended the meeting has changed. On Friday, a prominent Russian-American lobbyist told The Associated Press that he, too, had been part of the discussion.

Each revelation, no matter how small, has been seized upon by Democrats and dissected in detail on cable news.

Davis is credited with helping to steer the Clinton White House through a series of investigations, allowing the president to focus on his agenda while the lawyer shouldered the burden of dumping bad news and keeping West Wing staffers in lockstep in their response. He doesn't see a central figure doing that for Trump, and believes the president would be well-served to appoint a lawyer within the White House, instead of using a web of external attorneys.

Trump Jr. and Jared Kushner — the president's son-in-law and senior adviser also attended the June 2016 meeting — have retained attorneys separate from those hired by the president.

"They need to have one lawyer get every person in one room and figure out who knows what. No more surprises," said Davis, who favors proactively releasing any new findings. "The facts are coming out anyway — only question is whether they come out all at once or a little bit in a time."

The firestorm over Don Jr.'s emails has been a frustrating distraction during a stretch in which some White House advisers believed they were finding their footing. Trump's allies also were heartened by his trips to Europe, believing that his speech saluting national pride in Poland was a high point of his presidency and that he appeared statesman-like during a whirlwind visit to Paris.

But behind the scenes, a group of Trump aides gathered in a cabin on the presidential aircraft flying home from Germany last weekend to begin preparing for the initial fallout from Trump Jr.'s 2016 meeting. And then just six days later, as Air Force One was returning from France, more news was breaking about Trump Jr.'s shifting account of the meeting, again launching a bad news cycle and straining the credibility of the president's defense team.

For some, the steady drumbeat of Russia revelations echoes how the Watergate story emerged in one Washington Post story after another.

"I think the 'drip-drip-drip' is a perfect analogy, for that's exactly what people said about Watergate and President Nixon's Oval Office tapes," said Luke Nichter, a historian who has written several books on the former president. "They were released piecemeal and every release was damaging."

Even if the ongoing Russia questions don't end in legal consequences for Trump, they can still inflict serious political damage if allowed to needlessly drag out.

"I don't know that there's anyone powerful enough on the team to marshal this and get all the facts out now," says Ari Fleischer, former press secretary to President George W. Bush. "Omissions are as harmful as contradictions because it seems like you're hiding something. From a communications standpoint, it's unforgiveable."