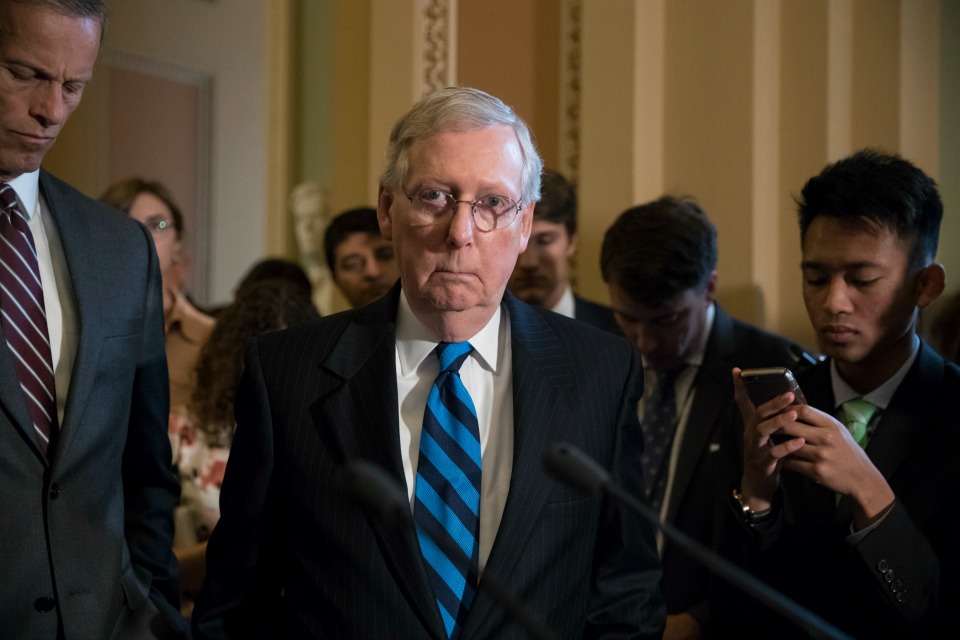 Senate Majority Leader Mitch McConnell planned to unveil a revised bill repealing much of the 2010 statute on Thursday despite no visible signs that leaders have rounded up enough GOP support to win its passage. McConnell's Kentucky colleague, conservative Rand Paul, said he opposed the new measure because it didn't do enough to uproot Obama's law.

"I don't see anything in here really remotely resembling repeal," Paul, a vociferous foe of McConnell's initial bill, said of the new version in a conference call with reporters.

Republicans have promised for seven years to repeal and replace the law, vows that lifted them to electoral triumphs and delivered control of the House, Senate and White House. But a divided GOP has struggled to come up with legislation fulfilling that pledge.

McConnell's resurrected legislation will ease some of the initial bill's cuts in Medicaid, the health insurance program for the poor, disabled and nursing home patients. It is also expected to beef up health insurance subsidies for lower-income people, paid for by retaining a pair of tax boosts Obama's statute levied on higher earners to help pay for his expansion of coverage.

Should the Senate pass the legislation — which remains a major question — the House would have to approve it as well. Backing from conservatives in both chambers will be essential because Democrats are united in opposition, and several from the House are already suggesting they're unhappy with what the Senate might do.

For many conservatives, the key is having provisions allowing insurers to sell low-premium policies with skimpy coverage, which they say is crucial for reducing premiums. Obama's law requires policies to cover a list of services including drug abuse services and maternity care, and both bills have language relaxing that requirement.

Rep. Morgan Griffith, R-Va., said Wednesday that removing those sections "makes it more difficult" to support the legislation. "Because then I think you're not really bringing down the cost of health insurance for the average family," he said.

In a blow to the GOP, the insurance industry's largest trade group criticized a proposal by Senate conservatives to let insurers sell plans with scant coverage if they also sold coverage meeting Obama's standards. America's Health Insurance Plans wrote that the proposal would lead to "unstable health insurance markets" and said people with serious pre-existing medical conditions could "lose access" to comprehensive or affordable coverage.

Conservatives also expressed opposition to the Senate's likely preservation of Obama's tax hike on wealthier people. But several suggested it wasn't a deal-breaker, as long as the new measure also relaxes coverage requirements.

"Our official position has been to repeal all the taxes, consistently," said Rep. Mark Meadows, who leads the conservative House Freedom Caucus." But he said he is open to negotiations if "we have something that looks at a policy decision that helps drive premiums down."

The Senate bill also has anti-abortion language, including blocking federal payments to Planned Parenthood, though that provision could end up being removed. Another conservative leader, Rep. Mark Walker, R-N.C., said conservatives are demanding that the restrictions remain.

"The only non-starter we have is pulling out the pro-life provisions," Walker said. "I think it'd be about 85 to 90 of us that would have it dead on arrival."

McConnell's renewed effort comes two weeks after he abandoned his initial plan due to deep divisions within the GOP. In the face of unanimous Democratic opposition, the health care bill will crash if just three of the 52 GOP senators oppose it, and at least a dozen Republicans have opposed the bill or distanced themselves from it.

Since his June retreat, McConnell has been reshaping the measure in hopes of winning GOP votes. Even so, no GOP leaders were yet predicting passage.

Sen. John Cornyn, R-Texas, his party's No. 2 Senate leader, said Tuesday that the new bill will probably preserve Obama's 3.8 percent tax increase on investment income for couples earning over $250,000 annually. It would also likely retain a payroll tax increase of 0.9 percent on the same earners that helps finance Medicare, he said.

The two levies are among the biggest Obama's 2010 statute imposed, raising an estimated $231 billion over the coming decade. Perhaps around $50 billion of that would be used to increase a $100 billion fund already in the GOP bill for states to help insurers contain consumers' premiums and deductibles, Cornyn said.

Cornyn also said the reworked bill will provide $45 billion over a decade to help states combat abuse of drugs including opioids, and make it easier for states to get federal waivers to decide how to spend money under their Medicaid health programs for the poor, elderly and nursing home patients.