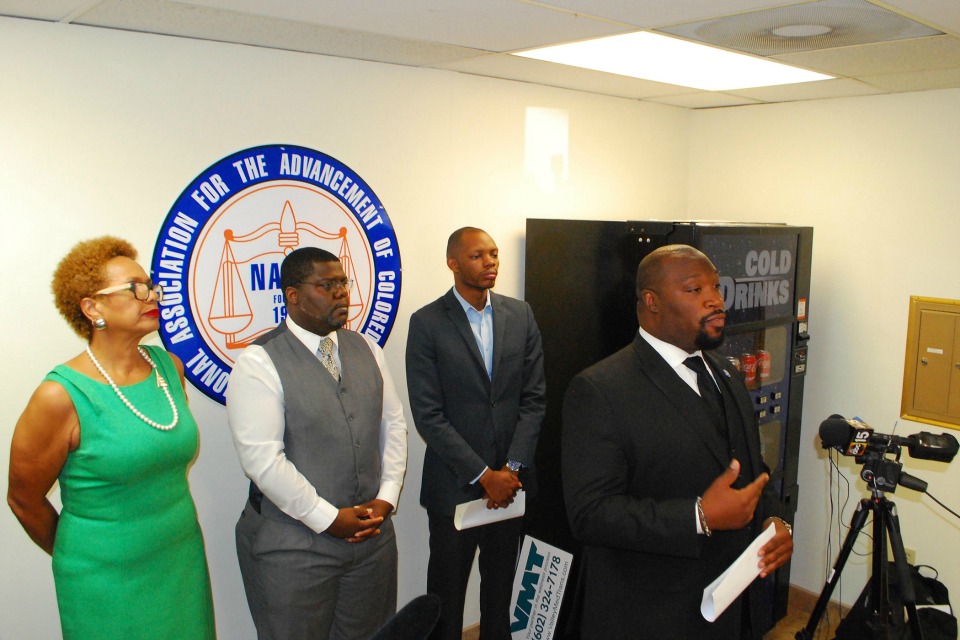 The Arizona Confederate monuments controversy has risen once again. Two years ago, it was over the naming of the Jefferson Davis Highway in the Southeast Valley. Other cities across the country in Louisiana, Texas, Tennessee, and Maryland have or are in the process of removing Confederate monuments from prominent public lands.

Metro-Phoenix Black leaders held a news conference at the Arizona Informant office June 5 to call on Arizona Governor Doug Ducey (R) to remove monuments honoring those who were at war with the country and pushed to protect slavery and hate.

There are six monuments around the state honoring Confederate soldiers, who died in the Civil War including one at the State Capitol’s Wesley Bolin Plaza and Arizona Confederate Veterans Monument in Greenwood Memory Lawn Cemetery in Phoenix, erected in 1999 by the Sons of Confederate Veterans.

Other locations include the Memorial Cemetery area of the Southern Arizona Veterans' Cemetery in Sierra Vista. The monument was erected in 2010 to honor the 21 soldiers interred in that cemetery who served in the Confederate Army during the Civil War and later fought in Indian wars in Arizona as members of the U.S. Army; a road named the Jefferson Davis Highway in the far East Valley near Apache Junction, Picacho Peak, known as the western-most battle in the Civil War; and a monument at the four graves of the only Confederate soldiers killed in action, by Native Americans in Arizona, Dragoon Springs stagecoach station east of Tucson.

“The confederacy in their articles of succession, wrote that they are protecting states rights; states rights to protect the peculiar institution of slavery,” explained Rev. Reginald Walton, the pastor of Phillips Memorial CME Church and president of Black Lives Matter of Greater Phoenix.

The monuments are a tool of terror, the Black leaders stated.

“This is a slap in the face of all Americans, as those who seceded, were at that time seceding from the Union, they became traitors to our country. To have monuments on state land honoring this institution of slavery is honoring terrorism,” noted Rev. Walton.

Rep. Reginald Bolding, who represents District 27, read a letter he sent to the Gov. Ducey, encouraging the governor and the Arizona State Board of Geographic Names and State Legislature, to put words into action this time.

Two years ago, Rep. Bolding sent a request to Gov. Ducey asking the governor to take action and strike the name of Jefferson Davis Memorial Highway from the portion of U.S. 60 in the east valley, following the horrific murder of nine Black church worshippers at the historic Emanuel AME Church in Charleston, S.C., by white supremacist Dylan Roof, who used the confederate symbols and ideology as a justification for the killing spree.

“Today, I call on you, again, to stand on the right side of American history,” said Bolding, sending a direct message to Gov. Ducey.

Bolding asked for immediate action on this issue.

Cloves Campbell Jr., co-publisher of the Arizona Informant, said that, the biggest issue discussed at the press conference was doing what’s right.

“This issue of having monuments and memorializing things that are against everything and principals the United States constitution stands for is something we don’t need to reminded of,” said Campbell. “Let’s not honor something that is wrong. Having these monuments are a slap in the face of not just African Americans, but every Arizonan.”

“For many African Americans, the symbol of the confederate flag is a symbol of racial terrorism,” said Dr. Ann Hart, president of the Maricopa County branch of the NAACP.

She said the flag and monuments are a symbol of resistance to the civil rights of Black people.

Symbols honoring the Civil War-era confederacy should not be on land paid for by state taxes, Hart added.

“The NAACP vehemently opposes any confederate monuments on public property,” said Roy Tatem Jr., the president of the East Valley branch of the NAACP. “We call on Gov. Ducey to take immediate action. We do not tolerate him passing the buck to a board that he appoints, to a board he has influence over.”

The group says that the governor needs to show leadership on this issue. The leaders said they want to know exactly how the governor feels on this issue. The civil rights and community leaders asked: “Does Governor Ducey support the idea of a terrorist group and its symbols, the Confederate Army, and its defense of slavery and hate on public land?”

Tatem called on Gov. Ducey to be a leader in the community and represent all Arizonans and not just a specific group, like the Daughters of the Confederacy.

Tatem continued: “These monuments are not only offensive to the descendants of African slaves, they are offensive to any American who celebrates the principles of liberty and justice on which our nation was founded.”

The Arizona Informant is a member publication of the National Newspaper Publishers Association. Learn more about becoming a member at www.nnpa.org.