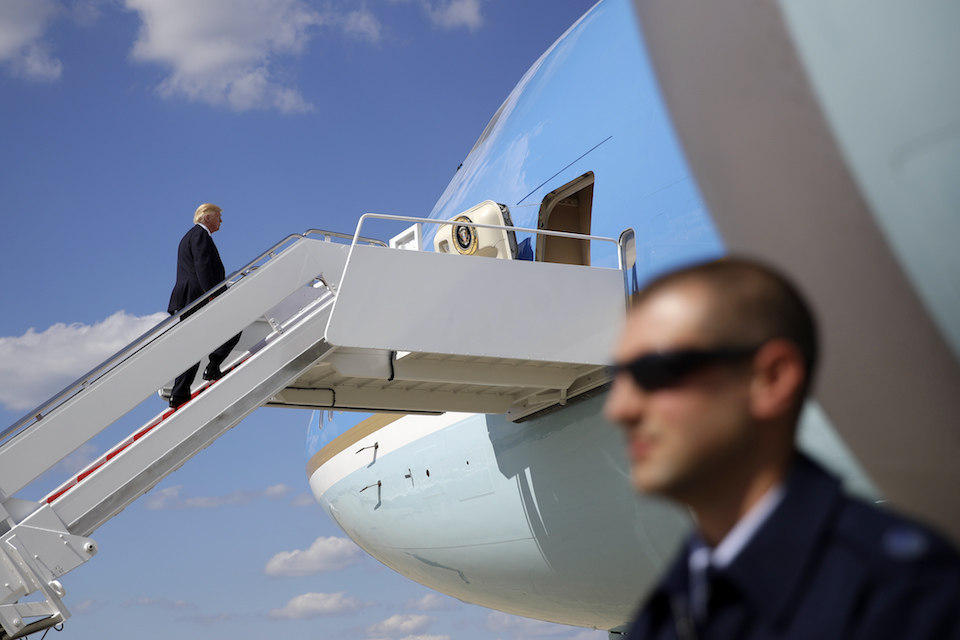 WASHINGTON (AP) — Not a shy guy, President Donald Trump is claiming he didn't know James Comey well enough to ask for his allegiance. But Trump had had more dealings with his FBI chief in a few months than President Barack Obama had with Comey in three years. Trump also says he found vindication in Comey's testimony to the Senate this past week, though none was offered.

A look at some statements by Trump and his aides on his fired FBI director's testimony and matters overshadowed by that drama:

TRUMP: "Despite so many false statements and lies, total and complete vindication." — tweet Friday.

THE FACTS: Trump's claim that he was cleared of wrongdoing by Comey's testimony is groundless. Comey testified that the FBI investigation into possible collusion between Russia and the Trump campaign did not extend to Trump himself during the time Comey was leading the FBI.

That investigation continues, as do congressional inquiries. Sufficient questions were raised for the Justice Department to appoint a special prosecutor with wide-ranging powers of inquiry — work that is only recently underway.

Comey told Trump in multiple conversations that Trump was not being personally investigated and said the president implored him to make that public. Comey told senators he resisted those entreaties because the situation could change and if it did, that, too, would have to be announced.

The fired FBI chief repeatedly refused to say in the hearing Thursday whether he thought Trump had obstructed justice. Comey suggested that was a matter for the special prosecutor, Robert Mueller, to judge as he proceeds.

THE FACTS: How well Trump knows a person varies. It depends on how well he wants to be seen as knowing that person at the time.

Bragging early in the campaign about his relationship with Russian President Vladimir Putin, he said "I got to know him very well because we were both on '60 Minutes'," even though they were on different segments from different locations. When perceived closeness became a potential liability, Trump took to saying, "I don't know Putin."

In August 2016, when the Trump campaign announced the hiring of Steve Bannon as campaign CEO and the appointment of Kellyanne Conway as campaign manager, its statement quoted Trump as saying: "'I have known Steve and Kellyanne both for many years."

But this April, when he was trying to play down Bannon's importance, he said "I didn't know Steve" and "he was not involved in my campaign until very late."

Actually, David Bossie, who was deputy campaign manager, told The Associated Press after Trump took office that Bossie had introduced Trump and Bannon in 2011 at Trump Tower and they had grown close. Bannon, while leader of conservative Breitbart News, interviewed Trump at least nine times in 2015 and 2016.

In his testimony, Comey detailed three one-on-one meetings with Trump in January and February, one of them a dinner. Comey also laid out specifics on at least two private phone calls initiated by Trump and said that altogether, they had had nine conversations.

In contrast, Comey said he and President Barack Obama only spoke twice in three years, and one of those times was to say farewell.

MARC KASOWITZ, Trump's personal lawyer, speaking of memos Comey wrote detailing his meetings with the president: "Although Mr. Comey testified he only leaked the memos in response to a tweet, the public record reveals that the New York Times was quoting from these memos the day before the referenced tweet, which belies Mr. Comey's excuse for this unauthorized disclosure of privileged information ..."

THE FACTS: Kasowitz has the timeline wrong.

Trump's tweet raising the idea that he might have recorded his Oval Office conversation with Comey came on May 12. The first New York Times story mentioning any of Comey's memos was four days later, on May 16. On Friday, Kasowitz sought to explain his comment by saying he believed a May 11 Times story about a dinner in which Comey said Trump asked for a loyalty pledge was based on one of his memos, even though the story didn't say that.

It's also not clear that the memo was "privileged information," as Kasowitz states without elaboration. It could be considered presidential communications privilege, meaning it wouldn't be subject to release under the Freedom of Information Act. But any of the participants in the discussion would still be at liberty to voluntarily disclose it, said Steven Aftergood, a government secrecy specialist with the Federation of American Scientists.

Violating privilege could subject someone to discipline, but it's not a crime, Aftergood said.

"The other peculiar thing about this whole discussion is that the claim of privilege supports the accuracy of Comey's account," he said. "Privilege can only apply to accurate information."

TRUMP: "Just yesterday we learned that one of the largest insurers is pulling out of Ohio. That could mean another 20,000 counties and 19,000 people will have no plan available to them." — Speech in Cincinnati on Wednesday.

THE FACTS: He was off by a factor of 1,000. According to a White House information sheet released with his remarks, the pullout of an insurer from the health insurance exchange in Ohio could leave people in 20 counties without choices in that market, not 20,000. Ohio has only 88 counties.

TRUMP: "Obamacare is in a total death spiral." — Cincinnati speech.

THE FACTS: That's overstated. Although the insurance markets of Obama's health care law are in trouble, they don't appear to be in a "total death spiral." Insurers have lost hundreds of millions of dollars and parts of the country are at risk of having no participating carriers on HealthCare.gov. But the turmoil appears to be concentrated in pockets, not nationwide, or "total."

Any blame for the situation is shared by the Trump administration, whose actions are sowing uncertainty that's contributing to higher premiums. The administration has failed to give a clear signal that it will continue to pay billions of dollars in subsidies that help reduce deductibles and copayments for low-income people. The lack of such assurances has been a major complaint from the insurance industry and from state regulators.

TRUMP: "We want millions of Americans ... to finally have the quality and affordable health care that they deserve." — Cincinnati speech.

THE FACTS: That aspiration is not validated by a nonpartisan analysis of the House Republican health bill that the president is trying to move forward.

The Congressional Budget Office recently said that in states that invoke certain provisions of the bill, people with chronic health problems could wind up being priced out of the market. Healthier people are likely to have access to more affordable coverage, but concerns are being raised about the impact on those who are older and sicker.

Professional groups representing doctors have warned that the House version of the legislation would undermine recent progress getting more people into the health care system, so chronic conditions can be picked up before they become life-changing problems.

TRUMP, promising to leverage taxpayer money into $1 trillion in road, bridge and waterway improvements: "Taxpayers deserve the best results for their investment, and I will ensure that this is what they get. The last administration passed a stimulus package of which only a tiny 7 percent went to infrastructure, and much of that was just wasted money." — Cincinnati speech.

THE FACTS: Obama's $787 billion package was not an infrastructure bill, but a catchall response to a deep recession, with public works projects as a significant part. More than one-third of it went to tax cuts. Medicaid spending and other help for health care made up the next largest component. Then came infrastructure, at about 13 percent, followed closely by education. The package mixed economic and social spending, helping states train displaced workers, for example, extending jobless benefits and assisting with low-income housing.

When the plan passed in February 2009, Trump praised its combination of tax cuts and spending programs, saying "I thought he did a terrific job."

TRUMP, tweeting Monday that Democrats "are taking forever" to confirm his nominees, including ambassadors: "They are nothing but OBSTRUCTIONISTS! Want approvals."

THE FACTS: Democrats haven't been given much to obstruct, whether they want to or not, because Trump is strikingly slow in nominating people for jobs requiring Senate approval.

Trump is lagging at least his last four predecessors on this front. He's only put forward 110, not even a quarter of the positions requiring confirmation. Obama had more than double the number of candidates submitted for Senate approval by now, 252, according to the nonpartisan Partnership for Public Service.

Vacancies remain at major embassies, among other offices. Trump has only nominated 11 ambassadors, of whom five have been approved, with scores more to come.

The shortfall is all the more striking considering that Trump's fellow Republicans control the Senate and only a simple majority is required to confirm them.

EPA CHIEF SCOTT PRUITT, crediting Trump with creating almost 50,000 jobs "in the coal sector" since the fourth quarter of last year. "In the month of May alone, almost 7,000 jobs." — NBC's "Meet the Press," June 4

THE FACTS: He's wildly off base. Instead of adding almost 50,000 jobs in the last few months, coal mining accounted for a total of only 51,000 jobs nationally at the end of May. That's only up about 400 jobs from the prior month, according to Bureau of Labor Statistics.

Pruitt counted jobs in unrelated enterprises to get his botched total. His staff pointed to statistics encompassing seven months of job gains across the far broader mining sector. That includes not just coal but also oil and gas extraction, metal ore mining, stone quarrying and other jobs.

PRUITT, arguing the U.S. had no alternative but to pull out of the Paris accord because it couldn't otherwise change its terms, told "Meet the Press" the deal "can only be ratcheted up," not softened.THE FACTS: The U.S. and all other targets are voluntary, determined by individual nations and can be modified in any direction — stronger or weaker — said people involved in negotiating the deal. The Obama administration had pledged to reduce carbon emissions by about a quarter within eight years.

Laurence Tubiana, France's climate ambassador who was a key negotiator, tweeted: "Of course US government CAN legally downsize its contribution but SHOULD Not."

"Scott Pruitt is wrong," Nigel Purvis, who was a State Department climate negotiator under presidents Bill Clinton and George W. Bush. "They are just hiding behind a falsehood because it is convenient."

Purvis said the Paris agreement calls for nations to make their targets progressively tighter every five years because the agreement doesn't do enough to prevent dangerous warming levels, but that provision doesn't prevent a country from submitting a weaker target now.

PRUITT, contending carbon dioxide is only one of many causes of man-made climate change: "It's a cause like methane and water vapor and the rest."  — "Meet the Press"

THE FACTS: The overwhelming majority of climate scientists say carbon dioxide is by far the primary cause of global warming. The Nobel Prize-winning United Nations Intergovernmental Panel on Climate Change calculated that about 73 percent of the human-caused warming since 1750 is from carbon dioxide. Water vapor and methane contribute much smaller amounts.

A joint statement from the National Academy of Sciences and Royal Society in Britain said "human-induced increases in CO2 (carbon dioxide) concentrations have been the dominant influence on the long-term global surface temperature increase."