Bill Cosby Goes on Trial, His Freedom and Legacy at Stake 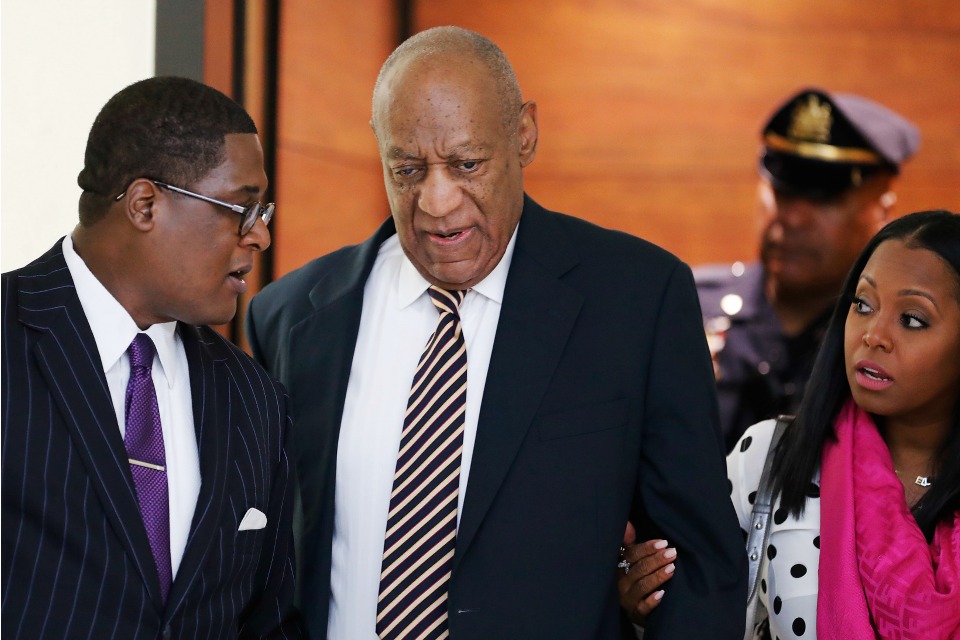 NORRISTOWN, Pa. (AP) — Accompanied into the courthouse by a member of the TV family who cemented his nice-guy image as America's Dad, Bill Cosby went on trial Monday on sexual assault charges, his legacy and his freedom on the line.

Cosby, 79, is accused of drugging and violating an employee of Temple University's basketball program at his suburban Philadelphia mansion in 2004. The comedian could get 10 years in prison if convicted.

His wife was absent as the TV star, using a wooden cane, hobbled past dozens of cameras into the courthouse. He chatted with actress Keshia Knight Pulliam, who played his daughter Rudy on the top-rated "Cosby Show," as they walked together.

Cosby smiled but said nothing when someone asked how he was feeling.

Judge Steven T. O'Neill instructed the jurors for an hour, reminding them not to glance at news updates on their cellphones. The jury was selected in the Pittsburgh area because of the heavy publicity surrounding the case and is sequestered at a hotel for the duration of the trial, expected to last two weeks.

Prosecutors and the defense were to give their opening statements later in the day.

Cosby's accuser, Andrea Constand, 44, of the Toronto area, is expected to take the stand this week and tell her story in public for the first time.

The jury consists of seven men and five women. Two members are black. Cosby has suggested that the accusations against him may be racially motivated.

Cosby built a good-guy reputation as a father and family man, on screen and off, during his extraordinary 50-year career in entertainment. He created TV characters, most notably Dr. Cliff Huxtable, with crossover appeal among blacks and whites alike. His TV shows, films and comedy tours earned him an estimated $400 million.

Then a deposition unsealed in 2015 in a lawsuit brought by Constand revealed an unsavory private life marked by a long history of extramarital liaisons with young women. Dozens of women came forward to say he had drugged and assaulted them.

The statute of limitations for prosecuting Cosby had run out in nearly every case. This is the only one to result in criminal charges against the comic.

Celebrity attorney Gloria Allred, who showed up for the first day of the trial, told reporters she is hopeful "there will be justice in this case."

Allred represents several of Cosby's accusers, including a woman who worked for the comedian's agent at the William Morris agency. She will be the only other accuser allowed to testify for the prosecution.

The judge hopes to avoid the kind of media frenzy that surrounded O.J. Simpson's murder trial in the 1990s. The cameras that dominated Simpson's trial aren't allowed in Pennsylvania courtrooms.

"We've had an O.J. hangover for many years," said Loyola Law School professor Laurie Levenson. "What you worry about as the judge is that the lawyers don't showboat, the evidence gets presented fairly, and that you have a jury that does its job and is not being thrown into the whole milieu of the trial outside the courtroom."

Constand filed a police complaint in 2005 over the night a year earlier, when, she says, Cosby drugged her and put his hand down her pants.

The district attorney at the time said the case was too weak to prosecute. But a new set of prosecutors charged Cosby a year and a half ago after the deposition became public and numerous women came forward.

In one of the more explosive disclosures in the deposition, Cosby said he had obtained quaaludes in the 1970s to give to women before sex.

Cosby's lawyers have said that the encounter with Constand was consensual, and they tried repeatedly to get the case thrown out. They said Cosby testified in the lawsuit only after being promised he could never be charged.

And they argued that the delayed prosecution makes the case impossible to defend, given that witnesses have died, memories have faded and Cosby, they say, is blind.

The AP does not typically identify people who say they are sexual assault victims unless they grant permission, which Constand has done.