Officer Who Shot Tamir Rice is Fired in Unrelated Matter 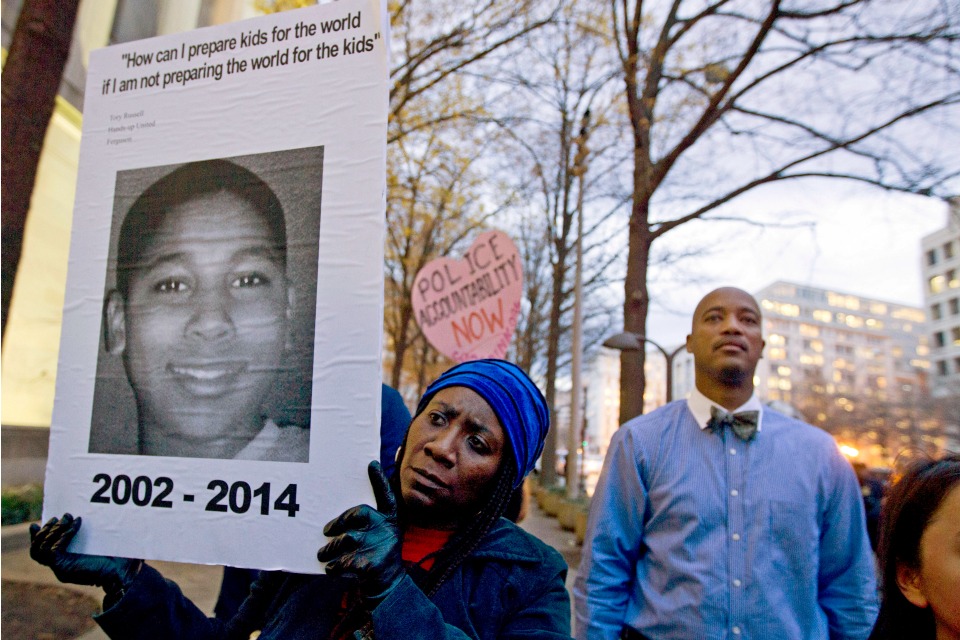 CLEVELAND (AP) — The police officer who shot and killed 12-year-old Tamir Rice was fired Tuesday for inaccuracies on his job application, while the officer who drove the patrol car the day of the shooting was suspended for violating a tactical rule.

Cleveland Police Chief Calvin Williams announced the discipline against officers Timothy Loehmann, who shot the boy, and Frank Garmback, who was driving the cruiser that skidded to a stop near the boy.

Tamir, who was Black, was shot outside a recreation center in November 2014 as he held a pellet gun that the white officers mistook for a real firearm. The killing became part of a national outcry about police violence against minorities, particularly black boys and men.

Loehmann was fired because he wasn't truthful on his job application, Williams said. A disciplinary letter cited his failure to reveal that a suburban department had allowed him to resign instead of being fired at the end of a six-month probationary period.

Garmback was suspended for 10 days for violating a tactical rule for his driving that day. A disciplinary letter against him cited him for driving too close to Rice. Video of the shooting shows the patrol car skidding to a stop just feet from the boy.

The two officers had gone to the center after a man waiting for a bus called 911 to report a "guy" was pointing a gun. He told the dispatcher that the guy could be a juvenile and the gun might be a "fake," information that wasn't conveyed to the officers. Loehmann shot Tamir within two seconds after the police cruiser stopped near the boy.

A county prosecutor announced in December 2015 that Loehmann and Garmback wouldn't be indicted after telling a grand jury there wasn't evidence to support criminal charges.

After the police were notified that the officers wouldn't face criminal charges, Williams ordered a committee to conduct an administrative review. He said both officers were disciplined for violating department rules.

"There's a 12-year-old kid, dead. People on both sides are going to say, 'It wasn't enough, it was too much,'" said Williams. "We have to be fair and objective."

"I'm relieved that Loehmann was fired as he should be. He should never have been a police officer," she said, but "Garmback should be fired for pulling up so close to Tamir."

Samaria Rice settled a federal civil rights lawsuit with the city last year for $6 million. She and her attorney, Subodh Chandra, said Cleveland city agencies suffered from systematic problems and that they hope a Department of Justice investigation will lead to rare federal civil rights charges.

"Shame on the city of Cleveland for taking so long to deal with the situation," said Samaria. "We still need accountability."

Cleveland police said they have taken steps to curb the use of deadly force and overhaul their hiring process.

Two officers were disciplined in 2015 for failing to thoroughly check Loehmann's personnel file before he was hired. An evaluation in the file said Loehmann was emotionally immature and inept at handling guns. Williams said the Cleveland Police now make sure they read through the personnel files and employment history of all their applicants.

"Was it the determining factor in us changing the way we hire? No," Williams said. "But this was definitely a catalyst for making sure that we got that process onboard a lot quicker."

Earlier this year, the 911 operator who took the call about Tamir was suspended for eight days for failing to tell the radio dispatcher that the caller had said Tamir could be a juvenile and the gun might be fake.

The police union representing the officers planned a news conference later Tuesday. Garmback and Loehmann were both on administrative duty when they were notified of the disciplinary measures Tuesday morning.

Garmback could be back on patrol after his suspension, if Williams permits it. Cleveland police spokeswoman Jennifer Ciaccia said he would first have to go through a reintegration program.