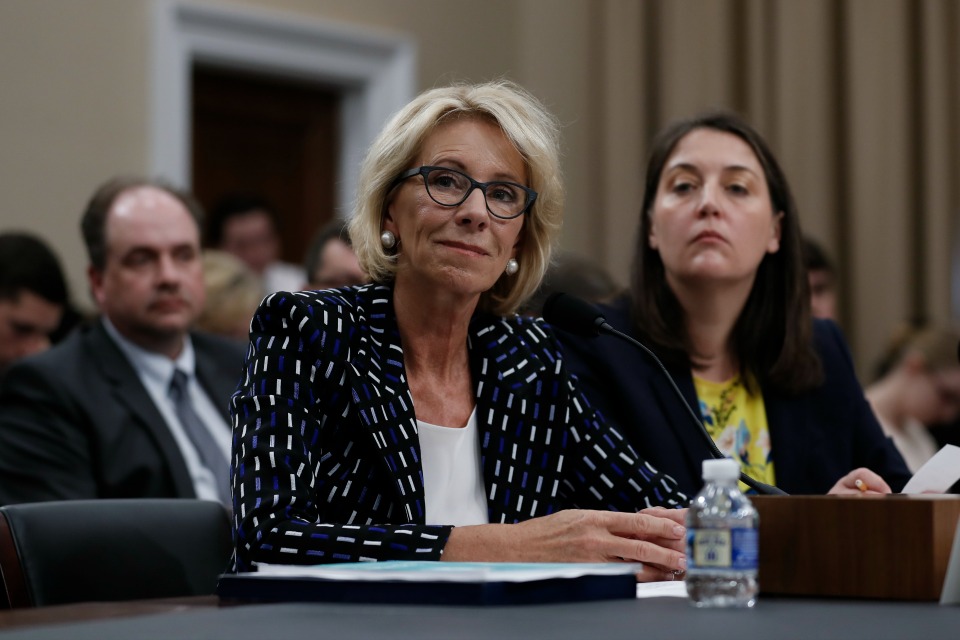 The plan promoted by Trump and Education Secretary Betsy DeVos widened a divide in the school-choice movement and brought swift condemnation from people who support more competition for public schools in the form of charter schools but oppose sending tax money to private institutions.

"I think it's an affront to the American dream," said Jonah Edelman, CEO of the pro-charter group Stand for Children, which planned to align with a frequent adversary, one of the nation's largest teachers unions, to oppose the plan.

The administration's budget proposal sets aside $250 million for the scholarships. That's a tiny sliver of the $4.1 trillion spending plan released Tuesday, but if approved it would mark the first time the federal government has helped pay private-school tuition for K-12 students.

The budget also calls for $1 billion for a new program encouraging school districts to give parents options in choosing a public school for their children. And it increases grants for charter schools.

Trump has said he eventually wants federal school-choice programs to expand to $20 billion a year.

"This administration understands that educational choice is an essential component to ensuring every child can access a quality education," said Tommy Schultz, spokesman for American Federation for Children, the school-choice advocacy group headed until last year by DeVos.

She and the group support using public money to help parents pay tuition for private schools, including religious ones, through vouchers or tax credits. The tax credits would go to parents who qualify based on their income or to corporations that provide private-school scholarships.

Critics say the approach will divert money from public schools that need it.

They find it especially objectionable because it's on a short list of spending increases in a plan that otherwise cuts the Education Department's budget by 14 percent. Trump's budget proposal reduces funding for after-school programs, arts education and college work-study programs.

"Under the guise of empowering parents with school choice," the administration's budget "would hurt the very communities that have the most to gain from high-quality public school options," Eli Broad, a Los Angeles billionaire and major proponent of public charter schools, said in a statement to The Associated Press. "Public school choice cannot come at the expense of all public school families and students."

An AP data analysis published earlier this month found that Broad and DeVos were among about four dozen wealthy Americans who have largely funded the school-choice political movement.

The contributors have generally fallen into two camps — those who support public charter schools and those who promote both charters and private-school vouchers. They have worked together to pass school-choice initiatives in the past and generally have butted heads with teachers unions.

DeVos' elevation to education secretary and her push to funnel public money into private schools have caused a split that became more apparent after this week's budget release.

Edelman of Stand for Children said his group is coordinating with teachers unions to oppose vouchers. An official at the American Federation of Teachers said the union is working with Stand for Children on the issue. The official spoke on condition of anonymity because the partnership has not been announced publicly.

In its own effort, the largest teachers union, the National Education Association, said it expected members and other supporters to send 20,000 emails Tuesday to the Department of Education denouncing the private-school scholarship program.

"Vouchers do not work and they take scarce funding away from public schools — where 90 percent of America's students enroll — and give it to private schools that are unaccountable to the public," NEA President Lily Eskelsen García said in a statement Tuesday.

Shavar Jeffries, president of Democrats for Education Reform, another pro-charter group that often differs with teachers unions, said he wants to focus on stopping the education cuts in the budget proposal and that his group also is open to working with teachers unions. He said only a small number of children are likely to benefit from any voucher program.

Derrell Bradford, executive vice president of 50CAN, an advocacy group that favors many forms of school choice, said the voucher proposal championed by Trump and DeVos is worth fighting for.

He said he's not troubled by the cuts elsewhere in the education budget because he sees the spending plan as a starting point for discussions and does not expect Congress to keep all the cuts the administration proposed.