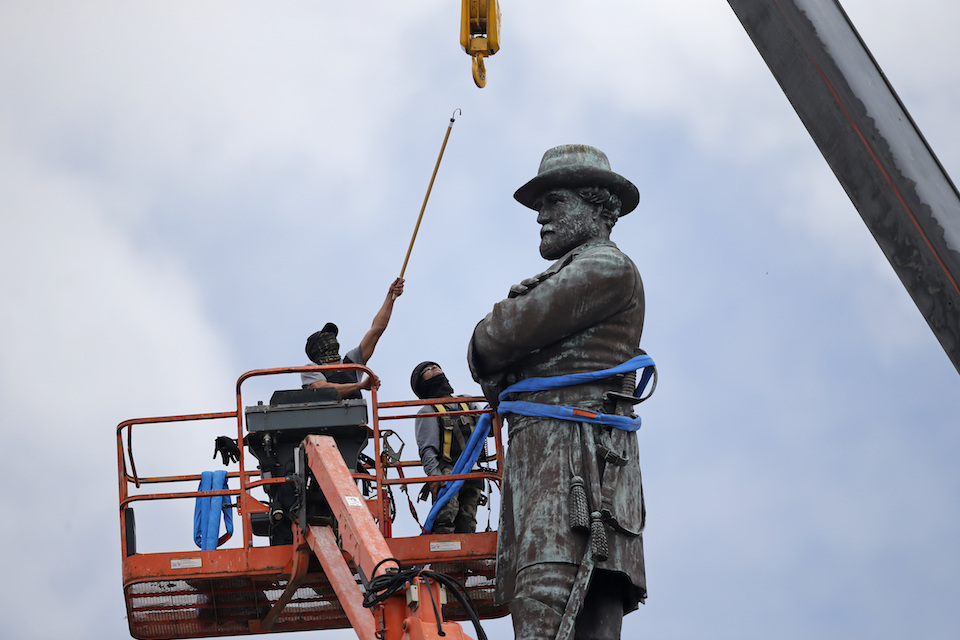 By JANET McCONNAUGHEY and REBECCA SANTANA, Associated Press
Published: 22 May 2017

NEW ORLEANS (AP) — They were among the city's oldest landmarks, as cemented to the landscape of New Orleans as the Superdome and St. Louis Cathedral: a stone obelisk heralding white supremacy and three statues of Confederate stalwarts.

But after decades standing sentinel over this Southern city, the Confederate monuments are gone, amid a controversy that at times harked back to the divisiveness of the Civil War they commemorated.

The last of the monuments — a statue of Gen. Robert E. Lee defiantly facing north with his arms crossed — was lifted by a crane from its pedestal late Friday.

As air was seen between Lee's statue and the pedestal below it, a cheer went up from the crowd who recorded history with their phones and shook hands with one another in congratulations.

Many in the crowd had waited since morning.

"I never thought I would see this day!" shouted Melanie Morel-Ensminger with joy. "But look! It's happening." 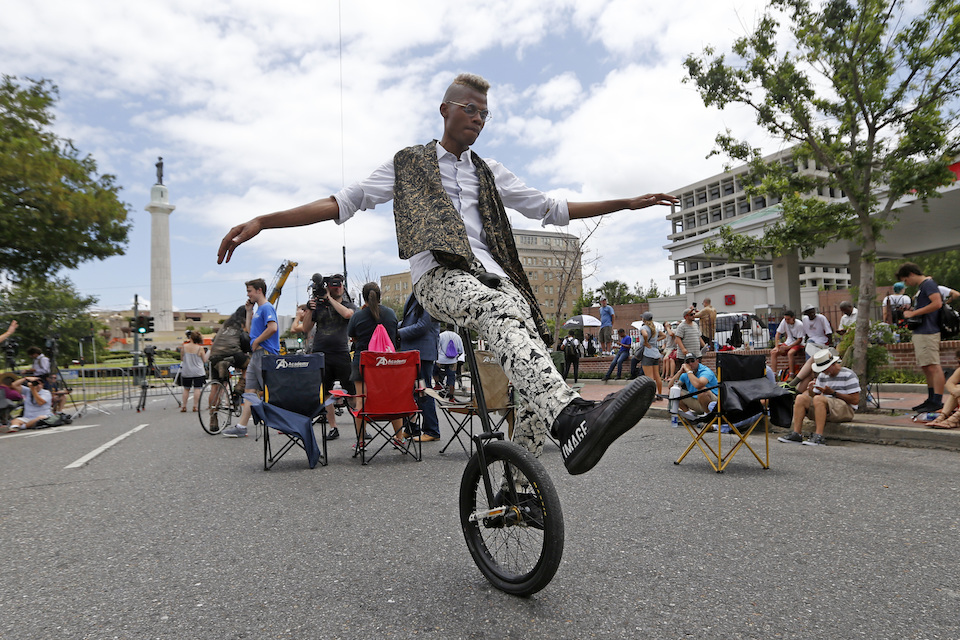 PHOTO: A man rides a unicycle in the street as workers prepare to take down the statue of former Confederate general Robert E. Lee, which stands over 100 feet tall, in Lee Circle in New Orleans, Friday, May 19, 2017. (AP Photo/Gerald Herbert)

Lee's was the last of four monuments to Confederate-era figures to be removed under a 2015 City Council vote on a proposal by Mayor Mitch Landrieu.

It caps a nearly two-year-long process that has been railed against by those who feel the monuments are a part of Southern heritage and honor the dead. But removal of the monuments has drawn praise from those who saw them as brutal reminders of slavery and symbols of the historic oppression of black people.

Landrieu called for the monuments' removal in the lingering emotional aftermath of the 2015 massacre of nine black parishioners at a South Carolina church.

The killer, Dylann Roof, was an avowed racist who brandished Confederate battle flags in photos, recharging the debate about whether Confederate emblems represent racism or an honorable heritage.

While Roof's actions spurred a debate in many parts of the South about whether it was appropriate to fly the Confederate battle emblem — and many places have taken it down — the reaction in New Orleans seemed to go even further, knocking away at even weightier, heavier parts of history.

Landrieu drew blistering criticism from monument supporters and even some political allies. But in explaining his reasoning, the mayor has repeatedly said they do not represent the diversity and future of New Orleans.

"After the Civil War, these statues were a part of that terrorism, as much as burning a cross on someone's lawn. They were erected purposefully to send a strong message to all who walked in their shadows about who was still in charge in this city," he added.

Of the four monuments, Lee's was easily the most prominent: The bronze statue alone is close to 20 feet (6 meters) tall. It's a bronze sculpture of Lee looking toward the northern horizon from atop a roughly 60-foot-tall (18 meter) column.

It's not massive like the Superdome or alluring like Bourbon Street, but Lee in his uniform was a familiar landmark for tourists and commuters alike.

Lee's removal was planned during the day and announced in advance.

Earlier removals happened after nightfall, a precautionary measure because of security concerns for contractors and workers involved in the effort.

Landrieu said the change was out of safety concerns because the statue was close to electrical wires and New Orleans' famous streetcar lines.

The atmosphere Friday was almost festive as dozens of people, some with lawn chairs, came out to see what many called history in the making.

"If you can see history as it happens, it's more meaningful," said Al Kennedy, who supported the removal. Speaking of the Confederate past, he said: "It's my history, but it's not my heritage."

But others criticized the move.

"Mayor Landrieu and the City Council have stripped New Orleans of nationally recognized historic landmarks," said the Monumental Task Committee, an organization that maintains monuments and plaques across the city.

"With the removal of four of our century-plus aged landmarks, at 299 years old, New Orleans now heads in to our Tricentennial more divided and less historic."

In 2015, the City Council voted 6-1 to remove the monuments after a succession of contentious public meetings. Contractors involved in the removal process have been threatened; statue supporters sued repeatedly to keep the statues up.

At last, a court decision cleared the way for the April removal of what is likely the most controversial of the monuments — seen as an overt tribute to white supremacy.

Statues to the Confederacy's only president Jefferson Davis and Gen. P.G.T. Beauregard followed in quick succession until only Lee was left.

Attention now shifts to where the monuments will go and what will take their place.

The city announced an outline of its plans late Thursday. It said it has received offers from public and private institutions to take individual monuments, so it will solicit proposals on where they will go through an "open and transparent selection."

Only nonprofits and government entities will be allowed to take part, and the city said the process will not include the Beauregard statue because of legal issues.

The city plans to leave the column at Lee's Circle intact and will mount public art in its place.