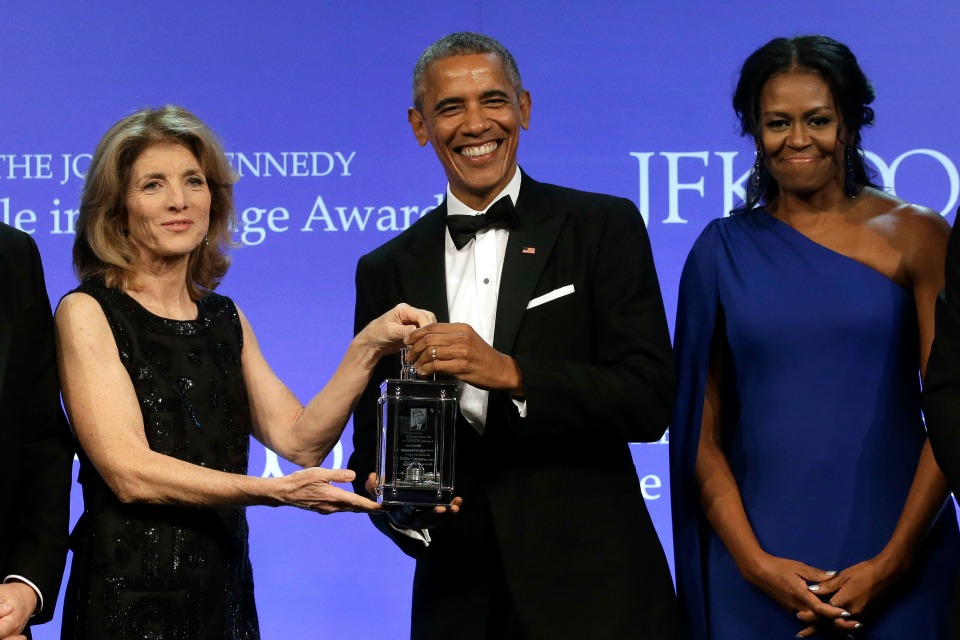 BOSTON (AP) — Former President Barack Obama, in his first public comments about the ongoing debate over his signature health care plan, implored members of Congress on Sunday to demonstrate political courage even if it goes against their party's positions.

Obama briefly returned to the spotlight as he accepted the annual John F. Kennedy Profile in Courage Award at JFK's presidential library in Boston. The award is named for a 1957 Pulitzer Prize-winning book by Kennedy that profiled eight U.S. senators who risked their careers by taking principled though unpopular positions.

In his approximately 30-minute speech after accepting the award, Obama steered clear of partisan attacks and never mentioned his successor, President Donald Trump, who has often criticized the previous administration and has worked to undo many of Obama's initiatives, including the Affordable Care Act.

The former president recalled members of Congress who voted to pass the ACA during his presidency, only to lose their seat in later elections.

"They had a chance to insure millions," he said. "But this vote could also cost them their seats, perhaps end their political careers."

"It is my fervent hope and the hope of millions ... such courage is still possible, that today's members of Congress regardless of party are willing to look at the facts and speak the truth, even when it contradicts party positions," said Obama, whose appeal seemed to focus on wavering Republicans.

Arizona Sen. Jeff Flake, one of the few Republicans to attend the dinner, told reporters the Senate would write its own version of the legislation and he did not expect the House bill to survive intact.

The former president focused much of his address on the legacy of President Kennedy, as the library prepared to mark the 100th anniversary of his birth later this month. Obama noted the Kennedys had long advocated for health care reform, and in particular, the late Sen. Edward Kennedy, who died of brain cancer before passage of the Affordable Care Act.

Among the guests who made their way down the red carpet into the library for the event were representatives of the Kennedy family, members of Congress, former Obama staffers and celebrities including former late-night talk show host David Letterman. Former Vice President Joe Biden and former Secretary of State John Kerry also were in attendance.

U.S. Rep. Joe Kennedy III, a Massachusetts Democrat, said Obama earned the award by meeting many challenges that faced him during his presidency.

"It's about understanding the challenges we face as a country and as a planet and mustering the political will to do what is right even if what is right at that moment isn't necessarily popular," said Kennedy, a harsh critic of the GOP health overhaul plan.

Schlossberg, 24, and planning to attend Harvard Law School, said Obama inspired him the way an earlier generation was inspired by his grandfather.

"Without Barack Obama, I might still be sitting on my couch, eating Doritos and watching sports," he said.

While the former president has steered away from any involvement in U.S. affairs during his early months out of office, he forayed into the French political debate last week by posting a message of endorsement for centrist presidential candidate Emmanuel Macron, who defeated his far right rival Marine Le Pen in Sunday's election.

On Monday, Obama travels to Italy to give a keynote address on climate change and food security at Tuesday's Seeds and Chips Global Food Innovation Summit in Milan.