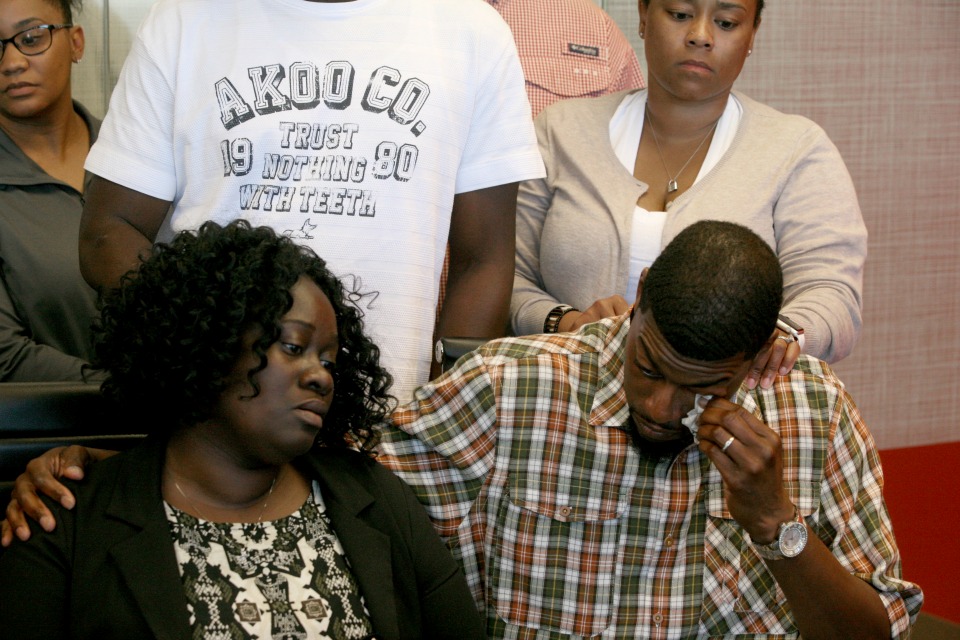 BALCH SPRINGS, Texas (AP) — The family of the black teenager shot and killed by a white police officer while riding in a vehicle leaving a party wants criminal charges filed against the officer, who was fired for violating department policies during the shooting.

Edwards, a high school freshman, was leaving the party with his two brothers and two other teenagers Saturday night. Police arrived at the scene to investigate an underage drinking complaint and spotted the vehicle leaving. Oliver opened fire as the teenagers were driving away.

Shots from his rifle pierced the front side passenger window, hitting Edwards in the front seat, according to Edwards' family attorneys, Lee Merritt and Jasmine Crockett. His 16-year-old brother was driving.

Oliver is white, according to the Texas Commission on Law Enforcement. Police chief Jonathan Haber, speaking to reporters Tuesday night, wouldn't describe what he believed Oliver did wrong because the officer can appeal his termination. He previously said police video of what happened Saturday night contradicted his department's original statement and raised questions about whether officers had acted correctly.

Thousands of Facebook and Twitter users have posted about the case in recent days with the hashtag "#jordanedwards," some comparing his death to other police shootings of young black men, such as 12-year-old Tamir Rice in Cleveland, who was fatally shot in November 2014 as he held a pellet gun.

Their call followed news Tuesday of the Justice Department's decision to not charge two white police officers in Baton Rouge, Louisiana, in the shooting death of a black man in 2016, and as a white officer in North Charleston, South Carolina, pleaded guilty to murder in the fatal shooting of a 50-year-old black man in 2015.

Fatal police shootings of African-Americans have prompted criticism from victims' families over delayed action, and in some cases mass protests. But Crockett credited Haber for moving quickly to correct the police department's mistaken statement and fire the officer the department said was responsible.

"After you've seen the scenario play out over and over, you're always building up this hope, and it seems like you're cut off right before you get to the promised land," Crockett said.

Crockett said Tuesday that she was optimistic that Oliver would eventually be indicted.

A family statement released Tuesday night called for disciplinary action against other officers who "extended this nightmare for those children."

"Our family is working hard to deal with both the loss of our beloved Jordan and the lingering trauma it has caused our boys," the family statement said.

Cindy Stormer, an attorney for Oliver, issued a statement saying the shooting was "recent and still being investigated."

"Everyone should wait until the facts come out and we know more," she said, according to the Dallas Morning News.

Police originally said the teenagers' vehicle was reversing "in an aggressive manner" toward officers, but Haber said Monday that video taken at the scene proved the vehicle was actually driving away.

The police department's latest statement, released Tuesday night, says officers entering the house heard gunshots ring out during a "chaotic scene with numerous people running away from the location." As officers exited the house, they encountered the vehicle backing out onto a main road and driving away despite their attempts to tell the driver to stop, the new statement said.

Friends have described Edwards as a good student and popular athlete. Edwards and the four people with him decided to leave what was becoming an unruly party as they heard gunfire and police were arriving, Merritt said, citing what witnesses had told lawyers.

As they drove away from the party, Crockett said, the brother driving the vehicle heard multiple gunshots that were close enough to leave his ears ringing. It took a few moments before the people inside in the car noticed Edwards slumped over, she said. They couldn't tell if he was already dead.

The brother who was driving pulled over and tried to motion to police for help, she said. Instead, Crockett said, he was detained and handcuffed. Crockett said the driver wasn't formally arrested, but a separate statement from the family released through Merritt says the two brothers were arrested.