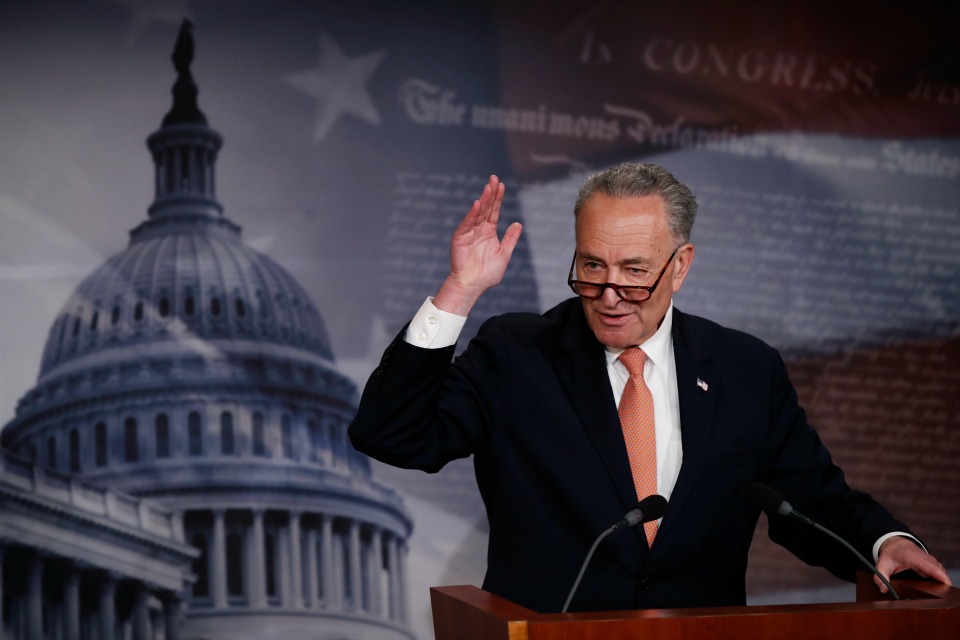 WASHINGTON (AP) — With just hours to spare, the House easily approved a short-term spending bill Friday that would prevent a partial federal shutdown over the weekend. But on President Donald Trump's 99th day in office, lawmakers were leaving for the weekend without completing two other measures he's coveted: A Republican health care overhaul and a budget financing government for the entire year.

House members overwhelmingly backed the weeklong spending measure by a lopsided vote of 382-30, averting a Saturday shutdown and moving the measure to the Senate for a certain final approval. Leaders hope it will give bipartisan bargainers enough time to finish a $1 trillion package financing government through Sept. 30, the end of the fiscal year.

But in a disappointment for the White House, Trump was destined to serve his 100th day in office — Saturday — without being able to claim victories on health care and a yearlong budget.

The White House had pressured GOP leaders to push legislation replacing President Barack Obama's health care law through the House this week, in time to give Trump bragging rights about it. But late Thursday, House leaders abandoned that effort for now after falling short of the votes they would need for passage.

"As soon as we have the votes, we'll vote on it," House Majority Leader Kevin McCarthy, R-Calif., told reporters.

Minority Democrats had threatened to withhold support for the temporary spending bill unless there was a bipartisan deal on the long-term $1 trillion measure. But they voted for it, anyway, citing expectations that disagreements would be resolved.

The struggle over both bills was embarrassing to the GOP, which has Trump in the White House and majorities in Congress. Republicans would have preferred to not be laboring to keep agencies functioning or approve a health care overhaul, the gold standard of GOP campaign promises for the past seven years.

"No poison pill riders," he said.

The bipartisan budget talks had progressed smoothly after the White House dropped a threat to withhold payments that help lower-income Americans pay their medical bills and Trump abandoned a demand for money for a border wall with Mexico.

With neither party savoring a federal shutdown, it seemed likely Congress would approve the week-long stopgap measure in time to keep agencies open.

On the separate health care bill, House Republican leaders are still scrounging for votes from their own rank-and-file to rescue it.

Republicans have recast it to let states escape a requirement under President Barack Obama's 2010 law that insurers charge healthy and seriously ill customers the same rates. They could also be exempted from Obama's mandate that insurers cover a list of services like hospitalization and substance abuse treatment and from its prohibition against charging older customers more than triple their rates for younger ones.

The overall legislation would cut the Medicaid program for the poor, eliminate Obama's fines for people who don't buy insurance and provide generally skimpier subsidies.

Centrist Republicans were the primary target of lobbying by the White House and GOP leaders seeking the 216 votes they would need to clinch passage of the health measure.

More than a dozen Republicans, mostly moderates, said they were opposing the legislation. Many others remained publicly uncommitted, putting party elders in a tough spot. If 22 Republicans defect, the bill would fail, assuming all Democrats opposed it.

House Speaker Paul Ryan, R-Wis., wants to avoid an encore of last month's embarrassment. He abruptly canceled a vote on a health care overhaul at that time because of opposition from moderates and conservatives alike.

On Wednesday, conservatives in the House Freedom Caucus announced their support for the revised health legislation. That reversed the conservatives' opposition to the earlier edition of the legislation.