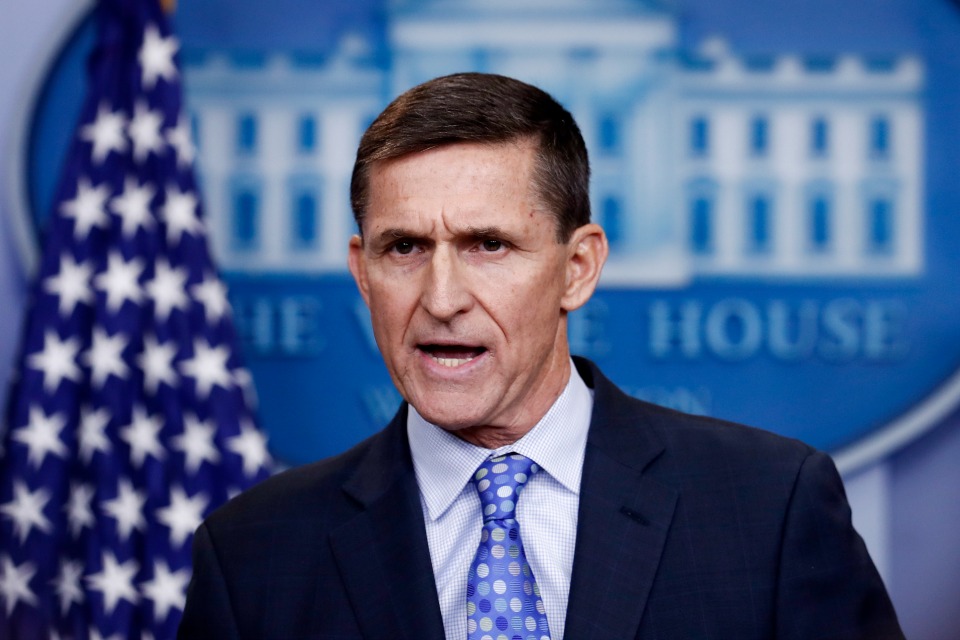 WASHINGTON (AP) — President Donald Trump's former national security adviser, Michael Flynn, appeared to violate federal law when he failed to seek permission or inform the U.S. government about accepting tens of thousands of dollars from Russian organizations after a trip there in 2015, leaders of a House oversight committee said Tuesday.

The congressmen also raised new questions about fees Flynn received as part of $530,000 in consulting work his company performed for a businessman tied to Turkey's government.

The bipartisan accusations that Flynn may have broken the law come as his foreign contacts are being examined by other congressional committees as part of investigations into Russian meddling in the 2016 election and potential ties between Trump associates and the Kremlin. Congress returned earlier this week from its spring recess, and Tuesday's announcements reflected renewed interest on Capitol Hill.

Reps. Jason Chaffetz, R-Utah, and Elijah Cummings, D-Md., said Flynn could be criminally prosecuted because, as a former Army officer, he was barred from accepting payments from foreign governments. Flynn, who headed the military's top intelligence agency, is a retired lieutenant general and was Trump's national security adviser until he was fired in February.

"That money needs to be recovered," said Chaffetz, chairman of the House Committee on Oversight and Government Reform. "You simply cannot take money from Russia, Turkey or anybody else."

The congressmen spoke after reviewing classified documents regarding Flynn that were provided by his former agency, the Defense Intelligence Agency. They were also briefed by agency officials. The congressmen declined to describe in detail the materials they reviewed.

Chaffetz and Cummings said they planned to write to the comptroller of the Army and the Defense Department's inspector general to determine whether Flynn broke the law and whether the government needs to pursue criminal charges.

Cummings also criticized the White House for refusing to turn over documents the committee requested about Flynn's vetting before his appointment and his foreign contacts during his three-week stint as national security adviser. In response to a letter to White House Chief of Staff Reince Priebus, a Trump administration official told the committee that documents relating to those contacts likely contained classified and other sensitive information and could not be turned over.

"That is simply unacceptable," Cummings said.

The committee also wants documents relating to Flynn's security clearance. In the White House response, Marc T. Short, Trump's director of legislative affairs, said the material could be provided only by the Defense Department.

Flynn campaigned for and advised Trump before the presidential election and was chosen as national security adviser in January. Trump fired him in February on grounds that he had failed to notify senior administration officials about his contacts with Russian officials before his appointment.

Cummings said Flynn's failure to formally report the Russian payments on paperwork requesting his security clearance amounted to concealment of the money, which could be prosecuted as a felony. Chaffetz said Flynn was obligated to request permission from both the Defense and State departments about prospective foreign government payments.

Flynn's lawyer said in a statement that Flynn briefed the Defense Intelligence Agency about the 2015 Moscow event organized by the Russia Today news organization. Flynn had led the spy agency until 2014, when he was forced to retire by the Obama administration.

During his briefings, Flynn "answered any questions that were posed by DIA concerning the trip," attorney Robert Kelner said.

A spokesman for the Defense Intelligence Agency, Jim Kudla, has said Flynn briefed the agency in advance about his trip to Moscow "in accordance with standard security clearance procedures."

A spokesman for Flynn previously said that Flynn disclosed the RT trip when he last came up for a security clearance review in January 2016.

Flynn received $33,750 from RT, which has been described by U.S. intelligence officials as a propaganda front for Russia's government. During a televised RT celebration, Flynn sat at the head table, next to Russian President Vladimir Putin.

Chaffetz and Cummings said Tuesday said that the documents they reviewed showed no evidence Flynn asked permission for the payments or later detailed the amounts he received to military authorities.

"There was nothing in the data to show that Gen. Flynn complied with the law," Chaffetz said.

Chaffetz added that while "it would be a bit strong to say that Flynn flat-out lied," he should have sought and received permission before accepting any foreign government payments. At issue in any further inquiry is whether the Russian and Turkish entities that paid Flynn were clearly government-supported or controlled.

Flynn also disclosed to the White House that he received between $50,000 and $100,000 as part of his personal stake in $530,000 that his company, Flynn Intel Group, received for consulting work performed last year for a Turkish businessman. Flynn's firm filed as a foreign agent last month with the Justice Department for the consulting work and acknowledged that it may have benefited the government of Turkey. Flynn's client, Inovo BV, is owned by a Turkish businessman who is also a member of a committee overseen by Turkey's finance ministry.

Earlier Tuesday, a Senate Judiciary subcommittee announced a public panel May 8 to hear testimony for the first time from the former acting attorney general, Sally Yates, who played a role in Flynn's firing.

Yates was supposed to testify publicly before the House intelligence committee in March, but that was canceled and has yet to be rescheduled. Some Democrats believe the White House wants to limit what Yates says publicly, but the White House has denied this. Former National Intelligence Director James Clapper is also to testify at the May 8 hearing.