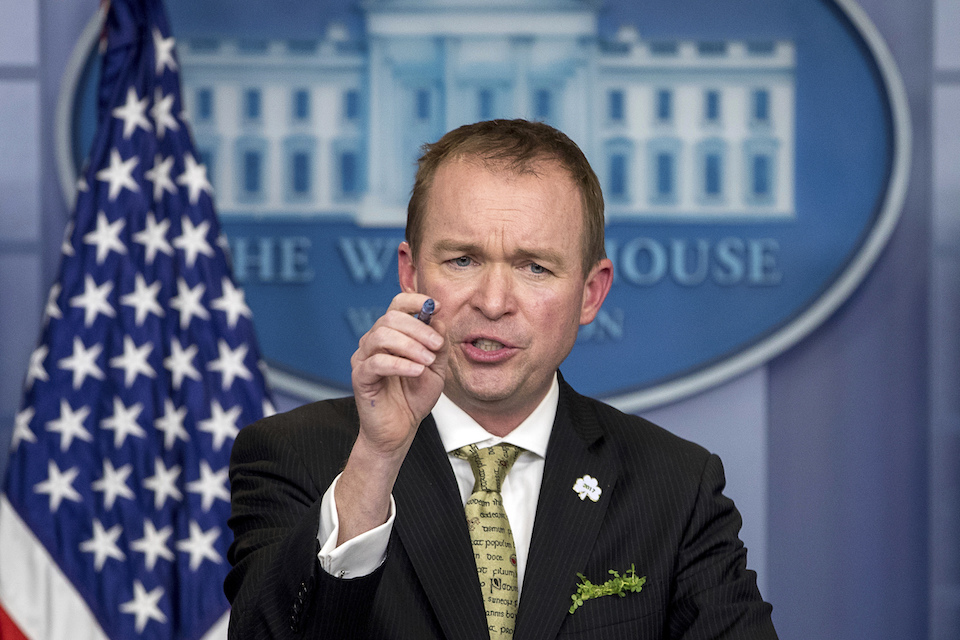 WASHINGTON (AP) — President Donald Trump is heading into one of the most challenging weeks of his presidency, juggling a renewed health care push and a looming budget deadline. It's all complicated by a potential showdown with Democrats over paying for a border wall.

The symbolic 100-day mark for the administration is Saturday. That's the same day government could shut down without a budget deal. Trump has announced a rally in Pennsylvania that day.

Despite Trump's dismissal that the 100-day marker is "artificial," the White House is planning a packed week of activities leading up to Saturday.

Trump will sign executive orders on energy and rural policies, meet with the president of Argentina and travel to Atlanta for a National Rifle Association event. Top aides will also fan out around the country to promote the administration.

Aides stressed on Sunday talk shows that funding a wall along the U.S.-Mexican border and a vote on an effort to repeal and replace President Barack Obama's health care law were priorities. But they also suggested a shutdown could be avoided.

"I don't think anyone foresees or expects or would want a shutdown," said budget director Mick Mulvaney on "Fox News Sunday."

Trump would like to revive a failed effort by House Republicans to replace the Affordable Care Act, or "Obamacare." He also hopes to use a $1 trillion catchall spending bill to salvage victories on his promised border wall, a multibillion-dollar down payment on a Pentagon buildup, and perhaps a crackdown on cities that refuse to cooperate with immigration enforcement by federal authorities.

But so far, negotiations have proven difficult, with disputes over the border wall and health law subsidies to help low-income people afford health insurance. House members received little information from leaders on a conference call Saturday.

White House chief of staff Reince Priebus said on NBC's "Meet the Press" that he believes the spending bill will include "something satisfactory" to reflect Trump's desire to build a wall. The legislation would keep the government running through Sept. 30, the end of the budget year.

"We expect the priorities of the president to be reflected," Priebus said, citing ongoing talks with the House and the Senate. He added that "it'll be enough in the negotiation to move forward either with construction or the planning ... to get going on the border wall and border security."

House Democratic leader Nancy Pelosi of California described a border wall as "immoral" and "expensive" when asked if there was any scenario in which Democrats will agree to money for a wall to avoid a shutdown.

"The Republicans have the votes in the House and the Senate and the White House to keep government open. The burden to keep it open is on the Republicans," Pelosi said. She noted that when Trump promised to build a wall during his campaign, he never indicated he would "pass billions of dollars of cost of the wall onto the taxpayer."

Trump weighed in on his proposed border wall Sunday on Twitter, saying "Eventually, but at a later date so we can get started early, Mexico will be paying, in some form, for the badly needed border wall."

Trump has repeatedly asserted that Mexico would pay for the wall, which he says is necessary to stop the flow of immigrants crossing the border illegally as well as drug smugglers.

On Obama's health law, Priebus said he'd like to have a vote on the GOP repeal-and-replace bill in the House this coming week. But he insisted it didn't make too much difference to the White House whether the vote came next "Friday or Saturday or Monday."

Trump tweeted a warning at Democrats on Sunday, saying: "ObamaCare is in serious trouble. The Dems need big money to keep it going - otherwise it dies far sooner than anyone would have thought."

Trump is also planning to outline a tax cut plan on Wednesday. He told The Associated Press on Friday that it would include a "massive" tax cut for both individuals and corporations.

On Fox, Mulvaney said to expect "some specific governing principles, some guidance, also some indication on what the rates are going to be." He added: "I don't think anybody expects us to roll out bill language on Wednesday."

The White House is eager to tout progress on the litany of agenda items Trump promised to fulfill in his first 100 days, despite setbacks including court bans on his proposed immigration limits and the high-profile failure in repealing and replacing Obamacare.

The president said Friday he spent his first 100 days laying the "foundation" for progress later in his administration, including by building relationships with foreign leaders.