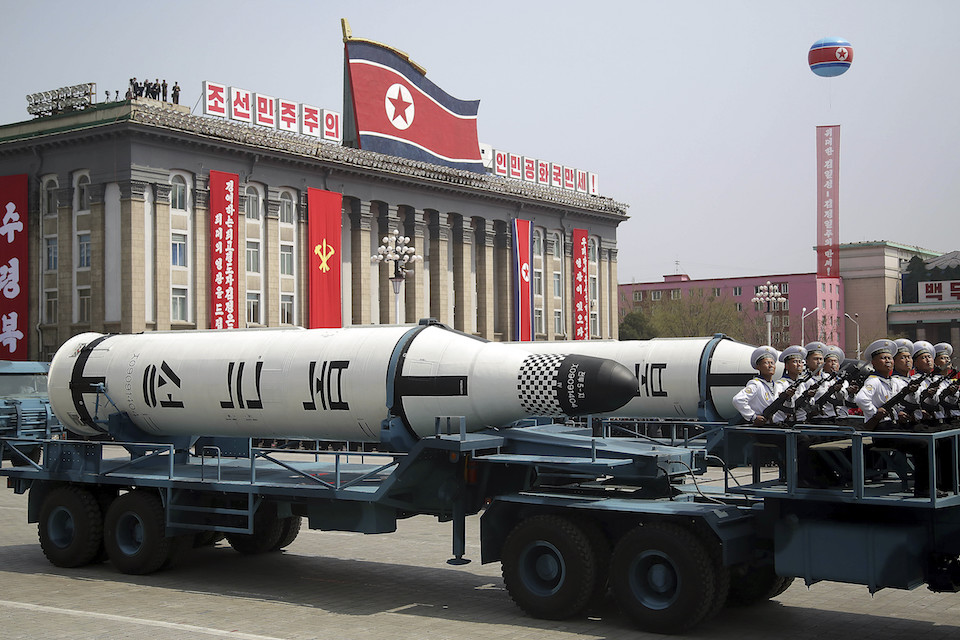 SEOUL, South Korea (AP) — President Donald Trump asserted on Sunday that China was working with the United States on "the North Korea problem," and his vice president told American and South Korea service members that the North's latest "provocation," a failed missile launch shortly before his arrival in Seoul, laid bare the risks they face.

While the North did not conduct a nuclear test, the specter of a potential escalated U.S. response trailed Pence as he began a 10-day trip to Asia amid increasing tensions and heated rhetoric.

Trump's national security adviser cited Trump's recent decision to order missile strikes in Syria after a chemical attack blamed on the Assad government as a sign that the president "is clearly comfortable making tough decisions."

But at the same time, H.R. McMaster said, "it's time for us to undertake all actions we can, short of a military option, to try to resolve this peacefully." 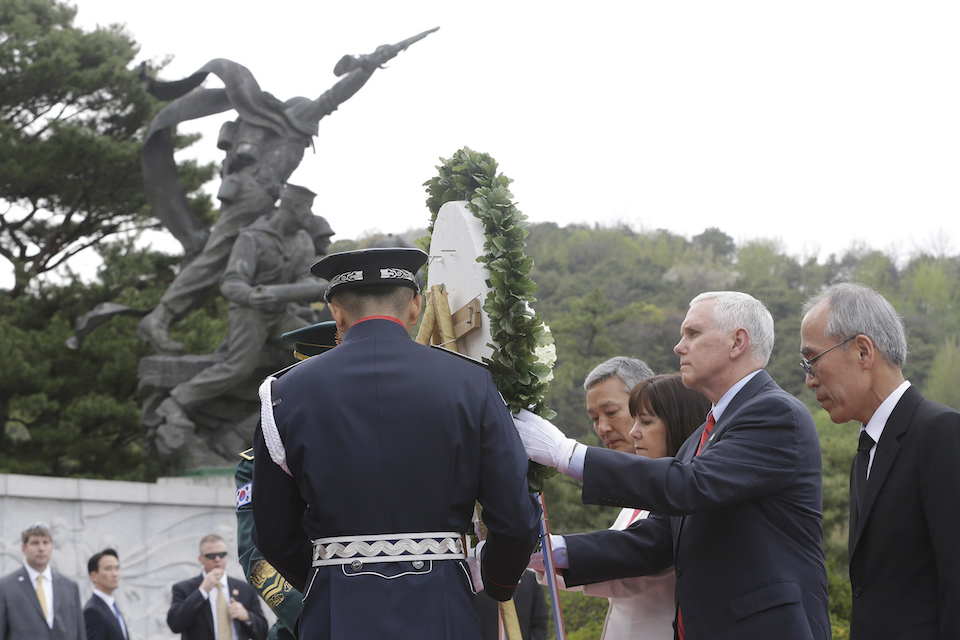 PHOTO: U.S. Vice President Mike Pence, second from right, and his wife Karen carry a wreath at the National Cemetery in Seoul, South Korea, Sunday, April 16, 2017. Pence arrived in South Korea on Sunday to begin a 10-day trip to Asia that comes amid turmoil on the Korean Peninsula over North Korea's threats to advance its nuclear and defense capabilities, and just after a failed missile launch by the North. (AP Photo/Ahn Young-joon, Pool)

In a broadcast interview that aired on Sunday, McMaster said the U.S. would rely on its allies as well as on Chinese leadership to resolve the issues with North Korea.

"I mean, North Korea is very vulnerable to pressure from the Chinese," McMaster said on ABC's "This Week."

The bottom line, McMaster said, is to stop the North's weapons development and make the Korean Peninsula nuclear-free:

"It's clear that the president is determined not to allow this kind of capability to threaten the United States. And our president will take action that is in the best interest of the American people."

After a two-month policy review, officials settled on a policy dubbed "maximum pressure and engagement," U.S. officials said Friday. The administration's immediate emphasis, the officials said, will be on increasing pressure on Pyongyang with the help of Beijing.

The officials weren't authorized to speak publicly on the results of the policy review and requested anonymity.

Pence will be tasked with explaining the policy in meetings with leaders in South Korea and Japan at the start of his trip, which will also include stops in Indonesia and Australia.

He will also aim to reassure allies in South Korea and Japan that the U.S. will take appropriate steps to defend them against North Korean aggression.

Pence was aboard Air Force Two flying over the Bering Sea when a North Korean missile exploded during launch on Sunday, U.S. and South Korean officials said.

The high-profile failure came as the North tried to showcase its nuclear and missile capabilities around the birth anniversary of the North's late founder and as a U.S. aircraft carrier neared the Korean Peninsula.

A White House foreign policy adviser traveling with Pence said no U.S. response to the missile launch was expected because there was no need for the U.S. to reinforce the failure.

The adviser spoke on condition of anonymity to discuss the administration's initial understanding of the launch.

Trump, spending the Easter weekend at his Florida resort, reinforced his commitment to the armed forces under his control.

"Our military is building and is rapidly becoming stronger than ever before," he tweeted.

More directly on North Korea, the president returned to a theme of placing much onus on China for reining in the North.

Last week, he said he would not declare China a currency manipulator, pulling back from a campaign promise, as he looks for help from Beijing, which is the North's dominant trade partner.

"Why would I call China a currency manipulator when they are working with us on the North Korean problem? We will see what happens!" Trump tweeted on Sunday.

Into this tense environment, Pence made his first trip to the region since taking office in January.

After arriving in the South Korean capital, he placed a wreath at Seoul National Cemetery and then worshipped with military personnel at an Easter church service at the U.S. Army Garrison Yongsan.

During a fellowship meal after the services, he said the tensions on the Korean peninsula had put into sharp focus the importance of the joint U.S.-South Korean mission.

"This morning's provocation from the North is just the latest reminder of the risks each one of you face every day in the defense of the freedom of the people of South Korea and the defense of America in this part of the world," said Pence.

"Your willingness to step forward, to serve, to stand firm without fear, inspires the nation and inspires the world."

Along with the deployment of the U.S. aircraft carrier and other vessels into waters off the Korean Peninsula, thousands of U.S. and South Korean troops, tanks and other weaponry were deployed last month in their biggest joint military exercises.

That led North Korea to issue routine threats of attacks on its rivals if they show signs of aggression.

The White House foreign policy adviser traveling with Pence told reporters that the type of missile that North Korea tried to fire on Sunday was medium-range, and that it exploded about 4 to 5 seconds after it was launched.

The North regularly launches short-range missiles, but is also developing mid-range and long-range missiles meant to target U.S. troops in Asia and, eventually, the U.S. mainland.

The failed launch will sting in Pyongyang because it came a day after one of the biggest North Korean propaganda events of the year— celebrations of the 105th birthday of late North Korea founder Kim Il Sung, the current leader's grandfather.

According to the White House adviser, the test had been expected and the U.S. had good intelligence both before and after the launch. The official said, without elaborating, that had it been a nuclear test, "other actions would have been taken by the U.S."