Trump Plugs Away at His Central Goal: Undoing Obama's Work 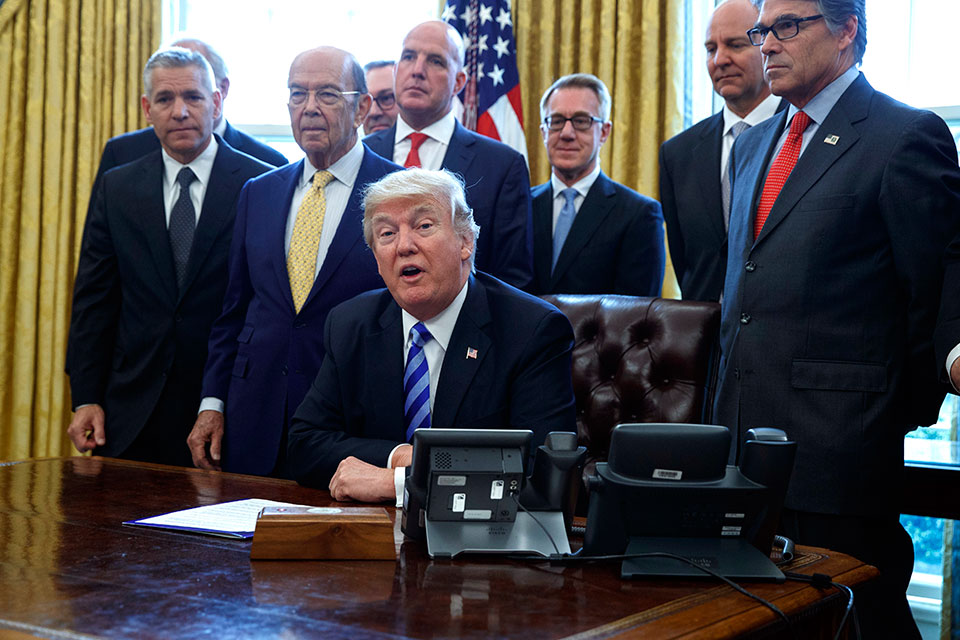 WASHINGTON— Amid the turmoil over staff shake-ups, blocked travel bans and the Russia cloud hanging overhead, President Donald Trump is steadily plugging away at a major piece of his agenda: Undoing Obama.

From abortion to energy to climate change and personal investments, Trump is keeping his promises in methodically overturning regulations and policies adopted when Barack Obama was president.

It hasn't all been smooth sailing.

Trump has had better outcomes in other areas.

Trump signed an executive order last week to deliver on his pledge to unravel Obama's efforts to curb global warming. The order launched a review of the Clean Power Plan, Obama's chief effort to curb carbon emissions by restricting greenhouse gas emissions at coal-fired power plants. Trump also lifted a 14-month-old halt on new coal leases on federal lands. The Obama administration had imposed a three-year freeze on such leases in January 2016.

The executive order covers a range of other Obama-era rules, including requirements to factor the "social cost" of carbon emissions into all regulatory actions and to crack down on methane emissions at oil and gas wells. Business groups had complained to Trump, himself a businessman, that the rules were intrusive and expensive.

Trump is expected to sign a measure soon to block online privacy regulations the Federal Communications Commission issued during Obama's final months in office. It's a first step toward allowing internet providers to sell information about their customers' browsing habits. The FCC rule was designed to give consumers more control over how companies like Comcast, AT&T and Verizon share information. Critics complained that the rule would have increased costs, stifled innovation and picked winners and losers among internet companies.

Trump is expected to sign legislation erasing another Obama rule, one that barred states from withholding federal family planning funds from Planned Parenthood affiliates and other clinics that provide abortions. The rule was finalized shortly before Obama left office in January.

The measure cleared the Senate last week with Vice President Mike Pence, who is also president of the Senate, casting the tie-breaking 51st vote in the 100-member chamber.

Trump greenlighted the long-delayed project on March 24, reversing Obama's decision less than 18 months earlier. After Trump invited TransCanada, the Canadian company building the $8 billion pipeline, to resubmit its application, the State Department approved the project, saying it would advance U.S. national interests. Obama had said the project would not.

Approval came nearly a decade after TransCanada applied to complete the 1,700-mile (2,735 kilometers) pipeline to carry oil from tar sands in Alberta, Canada, to refineries along the Texas Gulf Coast.

Trump says the project will reduce costs and reliance on foreign oil, and create thousands of jobs. Obama had said it would undercut U.S. credibility in international efforts to tackle climate change.

Under Obama, the Army Corps of Engineers had declined in December to allow pipeline construction under South Dakota's Lake Oahe on grounds that alternate routes needed to be considered. Native American tribes had sued to block construction, arguing that the pipeline threatened their water supply and cultural sites.

The project has moved forward again under Trump, who acted shortly after taking office. In February, the Army Corps of Engineers abandoned further study and granted an easement that was needed to complete the pipeline. Energy Transfer Partners immediately began drilling under the lake.

The Trump administration is re-examining federal requirements governing the fuel efficiency of cars and trucks. In 2012, the Obama administration set fuel economy regulations for model years 2017-2025 and agreed to complete a midterm evaluation by next year. Then, days before Obama left office, the Environmental Protection Agency decided to keep stringent requirements it had set in place for model years 2022-2025.

The auto industry balked. Trump announced in Michigan that he's putting the midterm review back on track. His decision has no immediate effect but requires the EPA to determine no later than April 2018 whether the 2022-2025 standards are appropriate.

Obama was his administration's biggest cheerleader for the sweeping agreement involving the U.S. and 11 other Pacific Rim nations. But the Senate needed to ratify it, and bipartisan opposition basically doomed it before he left office.

As a candidate, Trump railed against the agreement and pledged to withdraw from it, saying he was a better negotiator and could strike better deals. Shortly after taking office, he directed the U.S. trade representative to withdraw and said he would pursue individual deals with the other countries.

Trump reinstated a ban on providing federal money to international groups that perform abortions or provide information about them. Obama had lifted the ban when he took office in 2009.

Known as the "Mexico City Policy" or, by critics, as the "global gag rule," the regulation has been a political volleyball, instituted by Republican administrations and rescinded by Democratic ones since 1984. Trump signed it one day after the 44th anniversary of the Supreme Court's 1973 Roe vs. Wade decision that legalized abortion in the United States. The policy also prohibits taxpayer funding for groups that lobby to legalize abortion or promote it as a family planning method.

Trump has instructed the Department of Labor to delay an Obama-era rule that would require financial professionals who charge commissions to put their clients' best interests first when advising them on retirement investments. The "fiduciary rule" was aimed at blocking consultants from steering clients toward investments with higher commissions and fees that can eat away at retirement savings. The rule was to take effect this month. The financial services industry argued that the rule would limit retirees' investment choices by forcing asset managers to steer them to low-risk options.

Undoing the rule was part of a promised assault by Trump on banking rules enacted after the Great Recession. He has directed the Treasury secretary to review the 2010 Dodd-Frank financial oversight law, which he has said is a disaster. The law's aim was to keep banks from repeating practices that many blamed for the financial meltdown.