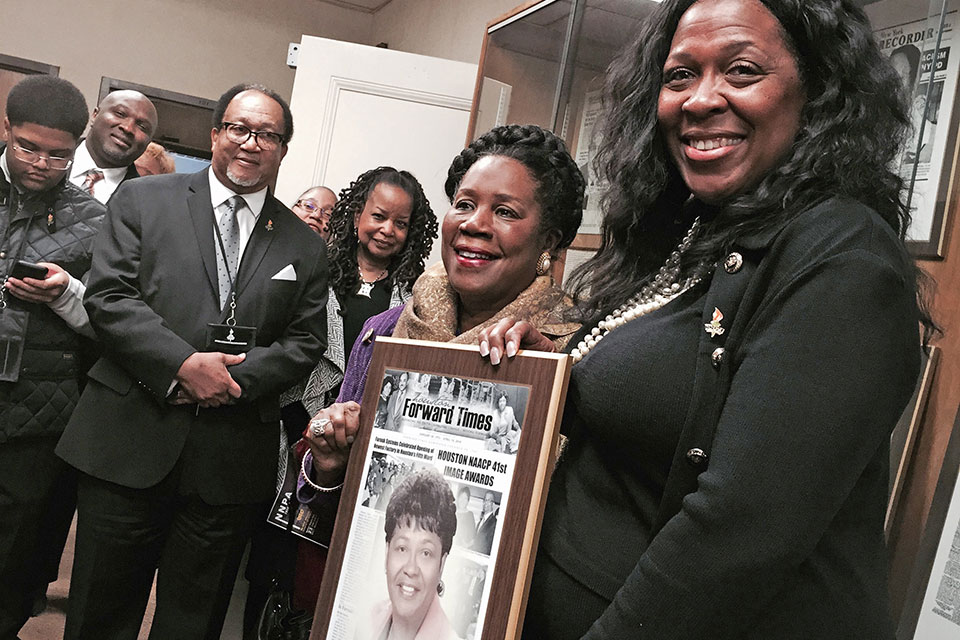 The March 23 Black Press Week ceremony dedicated to the late Lenora “Doll” Carter, former publisher of the “Houston Forward Times,” began with African drummers leading Carter family members into historic Andrew Rankin Memorial Chapel at Howard University in Washington, D.C. Several of Carter’s friends and members of the National Newspaper Publishers Association (NNPA) gave brief remarks and touching tributes, as the NNPA enshrined the former Houston publisher and community leader into its Gallery of Distinguished Newspaper Publishers. Carter’s enshrinement coincided with the 190th anniversary of the Black Press of America and launch of the Freedom’s Journal, the first Black-owned and operated newspaper in the United States. The Gallery of Distinguished Newspaper Publishers and the Black Press Archives have been housed at Howard University.

Highlights from the event:

Chair of the Congressional Black Caucus, Cedric, Richmond (D-LA), spoke to joint luncheon meeting of National Newspaper Publishers’ Assoc. and the National Hispanic Association Publishers in the Rayburn Building, during Black Press Week, March 21-24, 2017. He was among 16 members of Congress to address the group, including the esteemed Sheila Jackson Lee (D-TX). This was the day the vote on the Affordable Care Act was scheduled. It was pulled and not rescheduled, but at midday no one knew that. So many comments were about the proposed cuts to the ACA.

Richmond said the CBC’s Executive committee met with Pres. Trump on Wednesday at the White House, over the objections of some members and constituents. They were able to correct some misconceptions about African American history, policy issues, and criminal justice reform. The President was invited to utilize their expertise on many issues facing African Americans. The President said he would like to meet with the caucus on a regular basis.

Bernice Johnson (D-TX), ranking member on the Science and Technology committee, said jobs are being replaced by robots. Science, Technology Engineering and Math (STEM) needs to be a priority in our education system.

Jackson Lee said the Black Press needs to watchdog criminal justice and the Civil Rights division, especially as it relates to how children are treated in the justice system. They should not be placed in solitary confinement. Privatizing prisons will only make the problem worse.

Former CBC chair G.K. Butterfield (D-NC) called the Trump budget poison. The Black press must cover closely the proposed budget. Lou Correa (D-CA) stated he has observed that Vietnamese people take their voting rights seriously and always show up at the polls. However, in the last election Hispanics did not show up in the numbers anticipated. "That was a big mistake," he said.

Photos from the event: