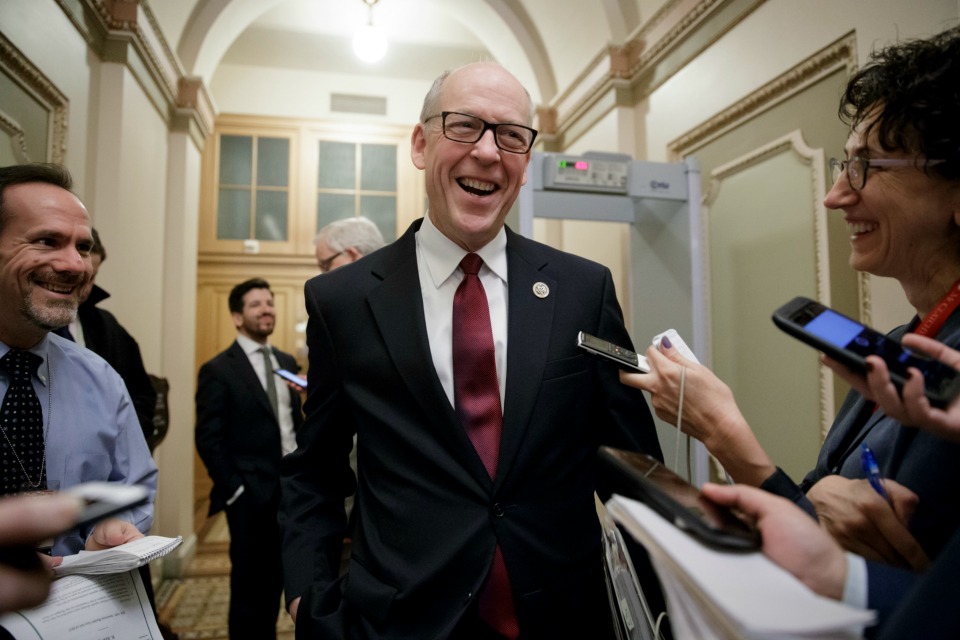 WASHINGTON (AP) — Republicans muscled their capstone health care overhaul past an initial barrier and toward a climactic roll call Friday, plunging ahead despite uncertainty over whether they had the votes to prevail in what loomed as a monumental gamble for President Donald Trump and his GOP allies in Congress.

With Trump budget chief Mick Mulvaney and other White House officials heading to the Capitol to lobby recalcitrant Republicans, Friday's showdown stood as the biggest test to date for Trump and House Speaker Paul Ryan, R-Wis.

Both were facing conservatives' demands for an all-out assault on former President Barack Obama's 2010 law, but at the same time GOP moderates complained the Republican bill would cause millions to lose coverage and boost medical costs for others.

With few public signs the measure was gaining support, Ryan traveled to the White House at midday to discuss its prospects with Trump.

In a backdrop to Friday's voting, top Trump aides told rank-and-file Republicans late Thursday that the president was through negotiating with holdouts. White House officials said that if the measure failed, Trump would move to the rest of his agenda — leaving lawmakers to blame for blocking the party's long-time goal of overturning Obama's overhaul.

"We'll see what happens," Trump said Friday when asked his course should the measure fail.

In a morning tweet, Trump targeted the House Freedom Caucus, whose hard-right members have been the core of opposition to the GOP legislation and have faced intense pressure from the White House and party leaders to fall into line. The bill would replace major parts of Obama's law and block federal payments for a year to Planned Parenthood.

"The irony is that the Freedom Caucus, which is very pro-life and against Planned Parenthood, allows P.P. to continue if they stop this plan!" Trump wrote.

For Trump, victory would clear an initial but crucial hurdle toward achieving the GOP's lodestar quest to repeal "Obamacare," the former president's 2010 health care overhaul. Defeat could weaken Trump's political potency by adding a legislative failure to a resume already saddled with inquiries into his campaign's Russia connections and his unfounded wiretapping allegations against Obama.

The GOP bill would eliminate the Obama statute's unpopular fines on those who do not obtain coverage and the often generous subsidies for those who purchase insurance. Instead, consumers would face a 30 percent premium penalty if they let coverage lapse.

Republican tax credits would be based on age, not income like Obama's subsidies, and tax boosts Obama imposed on higher-earning people and health care companies would be repealed. The bill would end Obama's Medicaid expansion and trim future federal financing for the federal-state program, let states impose work requirements on some of its 70 million beneficiaries.

The nonpartisan Congressional Budget Office has said the Republican bill would result in 24 million additional uninsured people in a decade and lead to higher out-of-pocket medical costs for many lower-income and people just shy of age 65, when they become eligible for Medicare.

Obama's law increased coverage through subsidized private insurance for people without workplace coverage, and letting states expand Medicaid for low-income residents. More than 20 million people have gained coverage since the law was passed.

Democrats were uniformly against the GOP drive to roll back one of Obama's legacy achievements.

"This bill is pure greed, and real people will suffer and die from it," said Rep. Pramila Jayapal of Washington state.

In Friday's first meaningful roll call, the House used a near party-line 230-194 vote to approve changes that leaders hoped would win over unhappy Republicans. These included improving Medicaid benefits for some older and disabled people and abolishing Obama's requirements that insurers cover specific services like maternity care.

House leaders seemed to be calculating that at crunch time enough dissidents will decide against sabotaging the bill, Trump's young presidency and the House GOP leadership's ability to set the agenda..
Republicans can lose only 22 votes in the face of united Democratic opposition. A tally by The Associated Press found at least 32 "no" votes, but the figure was subject to fluctuation amid frantic GOP lobbying.

GOP aides were privately saying conservative opposition was softening, yet another moderate announced he would oppose the legislation. Rep. Rodney Frelinghuysen, of New Jersey, chairman of the House Appropriations Committee, said the bill "would place significant new costs and barriers to care on my constituents."

For one opponent, Rep. Paul Gosar, R-Ariz., Trump's declaration that Friday was the GOP's last shot at repealing Obama's statute seemed to inspire only defiance.

"We're the legislative body last I looked, not the president," Gosar said.

Other Republicans said it was time for party loyalty.

"Too many people on our team feel like we have team members that are not, they're deserting us," said Rep. Chris Collins, R-N.Y., an early Trump supporter. "And in some cases for self-preservation. When someone says I have to vote no or I won't be re-elected, I don't respect that."