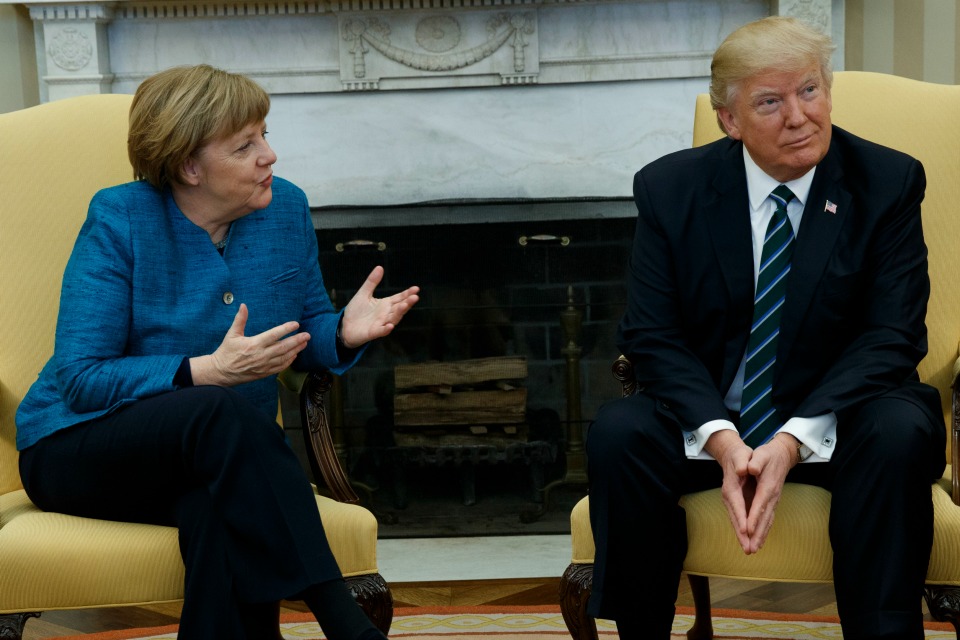 WASHINGTON (AP) — It was all smiles as President Donald Trump welcomed German Chancellor Angela Merkel to the White House on Friday, their first personal encounter since he frequently criticized her during the 2016 presidential campaign.

Their agenda included discussions on strengthening NATO, fighting the Islamic State group and resolving Ukraine's conflict, all matters that require close cooperation between the U.S. and Germany. The meeting, which was postponed from Tuesday because of a snowstorm, will be capped with a joint news conference.

Trump and Merkel smiled in front of cameras in the Oval Office at the start of their meeting, with the president urging journalists to "send a good picture back to Germany, please." The new president told reporters merely that he and Merkel would be discussing "many things" in their first face-to-face exchange of his presidency.

Their sit-down could be a restart of a relationship complicated by Trump's rhetoric on the campaign trail.

He spent a good part of 2016 bashing the chancellor, accusing her of "ruining" Germany for allowing an influx of refugees and other migrants from Syria.

"You watch what happens to Angela Merkel, who I always thought of as a very good leader until she did this. I don't know what went wrong with her," said then-candidate Trump at an August rally in Virginia. "What went wrong? Angela, what happened?"

Then, Trump seemed to care little about the potentially awkward ramifications were he to win. He invoked Merkel as a foil at his rallies, accusing his campaign rival, Hillary Clinton, of wanting to be "America's Angela Merkel." He lashed out at Time magazine when it named Merkel "Person of the Year" in 2015 instead of him.

Trump, at the time, did find ways to voice his respect. When a television station in September asked him to name a world leader he admired, he cited Merkel.

In his meetings with world leaders since the inauguration, Trump has adopted a more diplomatic public persona. He recently spent a weekend bonding with Japanese Prime Minister Shinzo Abe, golfing and dining with Abe at his Mar-a-Lago estate in Florida. He has cultivated a closer friendship with Israeli Prime Minister Benjamin Netanyahu, whom he has known for years.

But Merkel is used to an altogether different type of American leader, having shared a strong bond with President Barack Obama. She was the last of Obama's key European allies still in power when he left office. And as the leader of Europe's biggest economy and most stable government, Merkel emerged in recent years as the leading voice for a continent struggling with slow growth, identity issues and increased security threats after a string of terrorist attacks.

Reflecting their connection, Obama and his wife called Merkel and her husband on the day before Trump's inauguration to thank her for "her strong, courageous and steady leadership." It was Obama's final call with a foreign leader, his advisers said.

Merkel's first major encounter with Trump comes as she seeks a fourth term as chancellor in elections later this year. She has acknowledged the contest could be difficult and has stressed a need for stability after Britain's decision to leave the European Union.

She reportedly has studied Trump's speeches and policies in advance of her trip, eager to find areas for cooperation. Steven Keil, a fellow with The German Marshall Fund of the United States, said Merkel has little reason to dwell on Trump's past comments.

"Merkel is extremely pragmatic in her approach here, but she's also going to have some situations in which it will be tough for her to give too much," Keil said.

Trump has rattled European leaders with his "America first" mantra. He also backed Brexit and is skeptical of multilateral trade agreements. Merkel is expected to reiterate her belief that a strong EU remains in America's strategic and economic interests, a message she shared last month in Munich with Vice President Mike Pence.

She was accompanied by a trade delegation that includes top executives of BMW and Siemens, employers of tens of thousands of Americans. Many live in Southern states that Trump won in the U.S. election.

Military matters may be testy. Trump declared NATO "obsolete" before telling European leaders the alliance remains important. But he is expected to reiterate calls for NATO members to meet a minimum commitment for defense spending. Only the U.S. and four other members currently reach the benchmark of spending 2 percent of GDP on defense. Germany lags significantly behind.