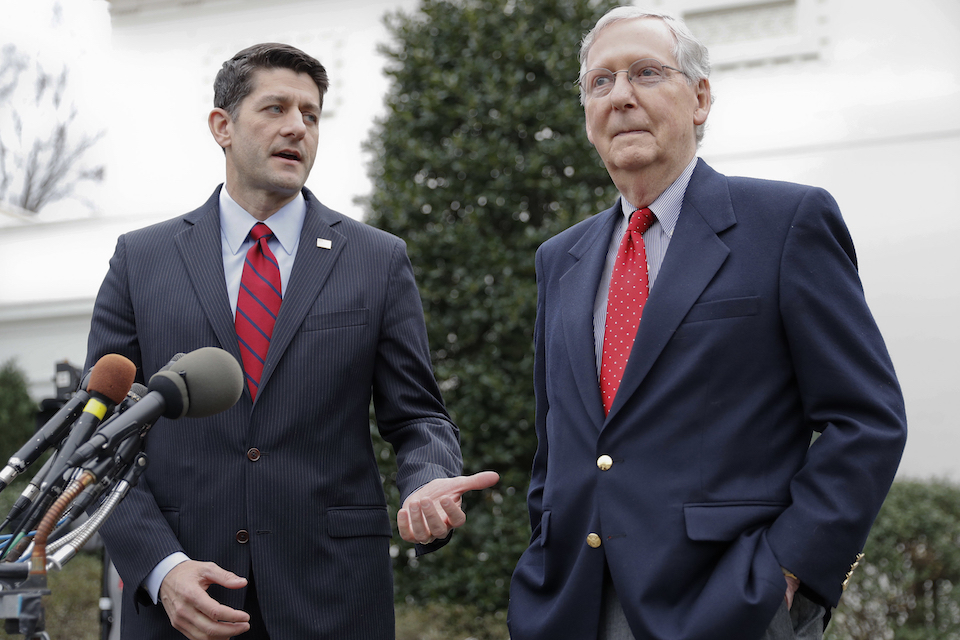 WASHINGTON (AP) — The Capitol is suddenly awash with troublemakers and rebels — and that's just the Republicans.

Whatever GOP unity was produced by Donald Trump's victory in November has all but disappeared, and Republican leaders are confronting open rebellion in their ranks as they try to finalize health care legislation. Trump's speech to a joint session of Congress this week was well-received, but did little to repair divisions.

In the Senate, a trio of conservatives that's been a thorn in the side of leadership is back at it again. And in the House, recalcitrant conservatives are banding together and threatening to foil House Speaker Paul Ryan's plans for swift passage of the legislation to repeal and replace former President Barack Obama's health law.

"Currently there are not enough votes to pass it in the House," Rep. Mark Meadows of North Carolina, head of an influential group of conservatives, declared in an interview Friday.

Meadows said leaders appeared to believe they could jam the bill through by twisting arms and getting Trump to make calls, but insisted such tactics wouldn't work on him without substantial change to the bill. His opposition is such that his wife sent out an email urging opposition to the bill, as reported by Politico this week.

"It will end up being Ryancare and the disaster will be wrapped around Republican's necks," Debbie Meadows wrote.

Rep. Meadows said Friday that his wife sent the email to a small group of friends and relatives in an effort to support him.

"She was trying to help her husband, she is distraught that this is a distraction and she probably is more distraught because she really respects and admires Paul Ryan," Meadows said.

Another GOP rebel, Rep. Thomas Massie of Kentucky, said that at a presentation Thursday, leaders played clips of Trump's joint session speech, with the goal of convincing lawmakers that they are aligned with the president on the pending bill. But Massie dismissed the effort as "very unconvincing."

The lawmakers are criticizing the developing legislation as "Obamacare lite."

They object in particular to a system of refundable tax credits that form the centerpiece of the legislation, and which they say would amount to a costly new entitlement. Instead they're demanding a vote on a straightforward repeal-only bill.

Ryan and other GOP leaders, who are aiming to pass the legislation through the House and Senate by early April, have tried to keep a game face despite the turmoil.

"I am perfectly confident that when it's all said and done, we're going to unify, because we all, every Republican, ran on repealing and replacing, and we're going to keep our promises," Ryan told reporters Thursday.

Maybe so, but first there will be some drama. And this week, there was plenty.

After mostly lying low and playing nice for the last several months, Sens. Rand Paul of Kentucky, Mike Lee of Utah and Ted Cruz of Texas are now uniting against the health legislation, and like their conservative counterparts in the House, they command the votes to frustrate leadership efforts if they don't back down.

On Thursday, Paul infuriated GOP leaders on both ends of the Capitol by marching over to the House with a crowd of reporters and his own copy machine to demand to see the draft health bill, and criticize leadership for keeping it under wraps.

He held an impromptu press conference outside a ground-floor room in the Capitol he dubbed "the secret office for the secret bill," which angry House leadership aides insisted was no such thing.

The Kentucky senator's chaotic gaggle was followed by a bizarre and apparently spontaneous scavenger hunt by House Democrats who made a futile search.

Paul kept up his campaign over Twitter on Friday, posting a picture of himself pointing quizzically at a closed door with the message, "We are continuing our search for the Obamacare Lite bill! Do you know where the secret location might be? Has anyone seen the bill?"

Paul's stunt provoked thinly concealed irritation from GOP colleagues, including Sen. Lamar Alexander of Tennessee, who chairs the health committee, of which Paul is a member. Alexander, a senior leadership ally, has been part of a group working on the replacement health care bill.

"Well, Sen. Paul is a valuable member of the committee and I think I'll give him a call and see if he'd like to have more information," Alexander said.

Many Republicans say it's time, urgently, for the party to pull together and get behind a repeal-and-replace bill, after spending fully seven years promising exactly that to voters.

"We do have some problems with two or three people on our side that make it so if this becomes a partisan vote we won't have the votes," said Sen. Orrin Hatch, R-Utah, another senior lawmaker. "It's a problem, it's a big problem."

Democrats who lived through their own share of drama before finally passing the Affordable Care Act can only stand back and jeer.

"Who would have thought, one month into the fight over the ACA, it's the Republicans, not the Democrats, who are in disarray and pointing at one another like an Abbott and Costello show," said Senate Minority Leader Chuck Schumer of New York.