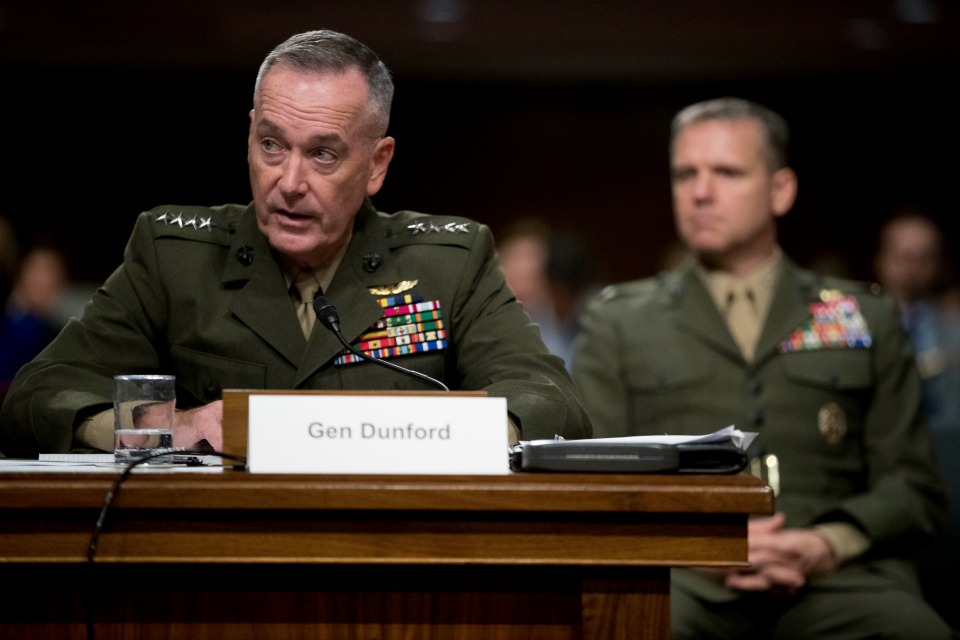 WASHINGTON — In a White House laden with competing power centers, a trio of military men has emerged as a force to be reckoned with.

Defense Secretary Jim Mattis, Homeland Security Secretary John Kelly and Joint Chiefs Chairman Joseph Dunford have quickly formed a stabilizing alliance in an administration whose earliest days have been marked by turmoil. At working dinners and meetings with President Donald Trump, the men — all retired or current generals —have sought to guide the new leader and foreign policy novice.

And they have increasingly represented Trump around the world, seeking to allay concerns about the new president and his nascent foreign policy.

Their fingerprints can increasingly be seen on the president's early national security moves, from the reworking of his controversial refugee and immigration order to the walking back of his talk of a "military operation" for deportations to his search for a national security adviser after the first was ousted.

All three are notable for their independence from Trump. None had a prior relationship with him but all have long histories with each other.

When Kelly's son was killed in Afghanistan in 2010, it was Dunford who arrived at his house in uniform to inform him. Mattis and Kelly recommended each other for defense secretary. All three served in Iraq around the same time.

In Washington and in foreign capitals, their long resumes have been a welcome addition to an administration led by a president and several advisers with no experience in government.

"It should be reassuring that they are visible with Trump and cementing their influence," said Christine Wormuth, a former undersecretary of defense for policy and a senior adviser at the Center for Strategic and International Studies, a Washington-based think tank.

The rising power of Mattis, Kelly and Dunford also could assuage some fears among Republicans that national security decision-making is becoming too concentrated in the White House West Wing. Jared Kushner, Trump's son-in-law and senior adviser, has been deeply involved in discussions with foreign officials. And chief strategist Steve Bannon, a media executive with no foreign policy experience, now has a seat on Trump's Principals Committee, which weighs pressing national security issues.

Of the three military men, Mattis has emerged as a dominant figure in Trump's orbit.

A 66-year-old retired Marine, Mattis is credited by some National Security Council staff with blocking an executive order that would have reopened CIA "black sites." Trump has said the Pentagon chief convinced him it wasn't necessary to bring back banned torture techniques like waterboarding.

On his way to Baghdad this week, Mattis bluntly rebuffed Trump's assertion that America may have a second chance to take Iraqi oil as compensation for U.S. efforts in the war-torn country.

Kelly, too, has tried to moderate some of the president's hard-line positions. Hours after Trump said deportations of people in the U.S. illegally were being carried out as a "military operation," Kelly said Thursday in Mexico that the U.S. would not enlist the military to enforce immigration laws.

White House spokesman Sean Spicer later said Trump was describing the "precision" of the operations and not referring to the military actually being involved.

Mattis and Kelly are said to have been deeply frustrated with the rollout of Trump's refugee and immigration ban and made clear to associates that they were not involved in crafting the directive. Both moved swiftly to address gaps in the measure, with Mattis asking that Iraqis who helped U.S. troops be exempt and Kelly clarifying that green card holders would not be affected.

For the first few weeks after the inauguration, Mattis and Kelly agreed that one of them should remain in the United States to keep tabs on the orders rapidly firing out of the White House, according to a person familiar with the discussions.

Despite their concerns about Trump's travel order, neither has spoken out against it. In fact, Kelly launched a particularly robust defense of it, which was welcomed by the White House, an administration official said.

The official and others with knowledge of the emerging dynamic insisted on anonymity in order to discuss the administration's internal dynamics.

While Trump tapped Mattis and Kelly for his Cabinet, he inherited Dunford, whose term as Joint Chiefs chairman runs through the end of the year. But the president, who has stocked his national security team with military leaders, is said to see Dunford as a "general's general," according to another person with knowledge of Trump's team.

Earlier this week, Trump tapped another military man, Lt. Gen. H.R. McMaster, as his national security adviser after firing Michael Flynn for misleading the White House about his dealings with Russia. Mattis, Kelly and Dunford all praised the pick, the administration official said.

Loren Schulman, a national security and defense expert at the Center for a New American Security, said the generals "speak similar language, in terms of how to assess risk or what military options are possible or relationships overseas — those are the good things they bring to the table."

What's bad, Schulman said, is that "military tools are not the only tools in the foreign policy tool kit."

Thus far, the military leaders have overshadowed Secretary of State Rex Tillerson, the former head of Exxon Mobil. Tillerson has taken a low-key approach during his first several weeks on the job, leading to concern among some diplomats that he is not a major player in Trump's national security team.

Some officials worry that diplomacy has been relegated to a back seat or been taken over by the White House. In response to such concerns, acting department spokesman Mark Toner, a career foreign service officer who served as deputy spokesman under John Kerry, said late Wednesday that press briefings would resume soon.