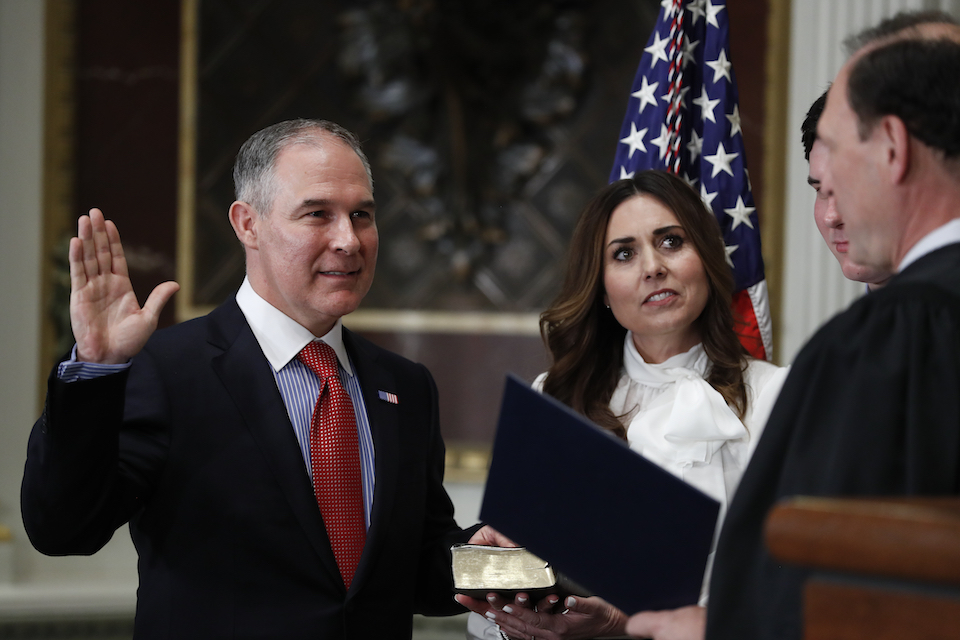 WASHINGTON (AP) — Over the strong objections of environmental groups, the Senate confirmed Scott Pruitt to lead the Environmental Protection Agency on Friday, giving President Donald Trump an eager partner to fulfill his campaign pledge to increase the use of planet-warming fossil fuels.
Pruitt was sworn in later Friday by Supreme Court Justice Samuel Alito.

In six years as Oklahoma's attorney general, Pruitt filed 14 lawsuits challenging EPA regulations that included limits on carbon emissions from coal-fired power plants. He also sued over the EPA's recent expansion of water bodies regulated under the Clean Water Act, a federal measure opposed by industries that would be forced to clean up polluted wastewater.

Pruitt's supporters cheered his confirmation, hailing the 48-year-old Republican lawyer as the ideal pick to roll back environmental regulations they say are a drag on the nation's economy.

"EPA has made life hard for families all across America," said Sen. John Barrasso, R-Wyo., chairman of the Senate Environment and Public Works Committee. "The agency has issued punishing regulations that caused many hardworking Americans to lose their jobs. Mr. Pruitt will bring much needed change."

The vote was 52-46 as Republican leaders used their party's narrow Senate majority to push Pruitt's confirmation despite calls from top Democrats to delay the vote until requested emails are released next week.

During his Senate confirmation hearing last month, Pruitt said he disagreed with Trump's past statements that global warming is a hoax. However, Pruitt has previously expressed doubt about scientific evidence showing that the planet is heating up and that humans are to blame.

Pruitt's nomination was vigorously opposed by environmental groups and hundreds of current and former EPA employees, who fear he will preside over massive budget and staff cuts.

"The biologists, scientists, lab technicians, engineers and other civil servants who work at the EPA must be able to do their jobs without political interference or fear of retribution," said J. David Cox Sr., president of the American Federation of Government Employees, a labor union representing more than 9,000 EPA employees.

The Standing Rock Sioux tribe in North Dakota has asked the courts to overturn recent federal approvals for the Dakota Access pipeline. The tribe and its supporters are also planning a large demonstration in Washington on March 10.

"The Trump Administration is circumventing the law: wholly disregarding the treaty rights of the Standing Rock Sioux," Jan Hasselman, an attorney representing the tribe, said in a statement. "It isn't the 1800s anymore — the U.S. government must keep its promises."

Democrats boycotted a committee vote on Pruitt's nomination last month, citing his refusal to hand over thousands of emails that he exchanged with oil and gas executives.

As part of a public records lawsuit, a state judge in Oklahoma on Thursday concluded there was no legal justification for Pruitt's withholding his correspondence for the past two years. She ordered him to release most of the emails by next week.

"Emails! Remember emails?" Schumer asked on the Senate floor. "'We should get them out!' they said about Hillary Clinton. ... If they weren't worried about them, then why rush?"

To dramatize their cause, Democrats kept the Senate in session Thursday night into Friday morning with speeches opposing Pruitt's confirmation. Democrats were still marching to the floor at daybreak.

In the end, McConnell had the votes. So far, the Senate has confirmed 14 out of 22 Trump Cabinet or Cabinet-level picks requiring confirmation.

Another nominee, billionaire businessman Wilbur Ross, cleared a Senate hurdle on Friday and is on track to win approval to serve as commerce secretary. A final vote is slated for Feb. 27.

Trump has tapped some of the wealthiest Americans to serve in his Cabinet, and ethics reviews have slowed the confirmation process. So have Senate Democrats, who have opposed nominees and forced hours of debate.

Pruitt is closely aligned in his home state with oil and gas companies, whose executives have backed his political campaigns. Though Pruitt ran unopposed for a second term in 2014, public campaign finance reports show he raised more than $700,000, much of it from people in the energy and utility industries.

Environmental groups have already begun hiring additional lawyers to stymie as much of Pruitt's agenda as possible in court.

"Scott Pruitt is the worst pick ever confirmed to lead the EPA," said Rhea Suh, president of the Natural Resources Defense Council. "We'll use every tool in the kit to stop him from harming our air and water, endangering our communities and surrendering our kids to climate catastrophe."
___
Tim Talley contributed from Oklahoma City.
___
Follow AP environmental writer Michael Biesecker at Twitter.com/mbieseck