Blacks Will Account for Nearly 18 percent of U.S. Population by 2060 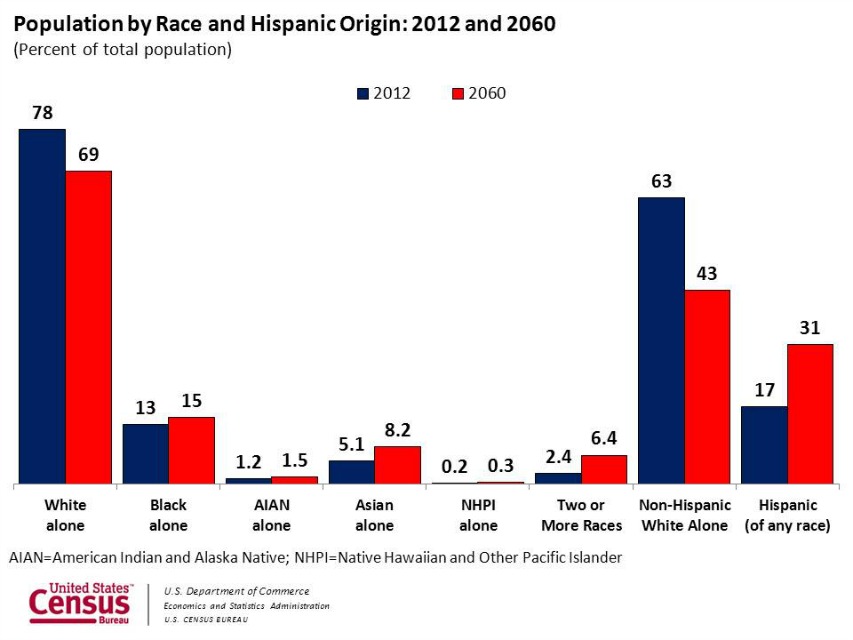 Each year, the Census Bureau recognizes Black History Month by releasing up-to-date statistics that reveal the total Black population, the number of Black-owned businesses and even how many African American military members are serving the country.

Currently, the Black population stands at 46.3 million, up about 1.3 percent from the previous year. The Census Bureau identifies individuals as Black, even if they list Black and another race on the survey.

Census officials project that the Black population will increase to 74.5 million by July 1, 2060 and, on that date, African-Americans will account for 17.9 percent of the nation’s total population.

The health care and social assistance sector is followed by professional, scientific and technical support (15,078) and administrative, support, waste management and remediation services (9,644).

Census officials also noted the contributions of African Americans in the military. The latest figures show that 2.2 million Black military veterans reside in the United States.

Education has also improved among African Americans with the Census Bureau reporting that 87 percent of the Black population age 25 and over has at least a high school diploma, more than 20 percent hold a bachelor’s degree and 1.9 million have attained advanced degrees.

Educators said the results are encouraging and the change that’s making a difference is at the middle and high school levels.

“Gone are the days when we take a 9th grade class and plug them all into those beginning courses,” Sue Chittim, the principal of Annapolis High School in Md., told the Capital Gazette. “We take our time to make sure there’s a readiness level and they’re taking classes of interest.”

Civil rights activist Carl Snowden said the graduation numbers for African Americans are encouraging, but he is concerned about other indicators of success, such as test scores.

“I would be thrilled if the achievement gap was closing at the same rate, which it’s not,” he said.

Further Census statistics indicate that the annual median household income for African Americans is $36,544, compared to the $55,775 of the rest of the country. More than 25 percent of the Black population lives below the poverty level, while the national average is 14.7 percent.

Closing these gaps would be a tremendous challenge even in a reasonable political environment, Congressman Cedric Richmond, chairman of the Congressional Black Caucus (CBC), wrote in an editorial.

The current political climate is anything, but reasonable, Richmond said.

Richmond continued: “Schools in many parts of the country look as though Brown v. Board of Education never happened. The right to vote is in greater peril than it has been in over 50 years. Needless to say, the work ahead of us is as important as it has been at any point in our history.”

For more than 45 years, the Black Caucus, known as the “Conscience of the Congress,” has worked to improve conditions for African-Americans across the country.

Richmond said that the CBC would continue to push for the restoration of the Voting Rights Act and work to end discriminatory voting practices.

“We will continue to lead efforts to reform our nation’s broken criminal justice system and promote community-centered policing,” said Richmond. “We will work to create educational opportunities and equity, ensure programs are in place for job and career training, and strengthen Historically Black Colleges and Universities.”

Richmond added: “This moment, like many others before it, will require us all to remain active and engaged, if we hope to reach new heights in this struggle.”