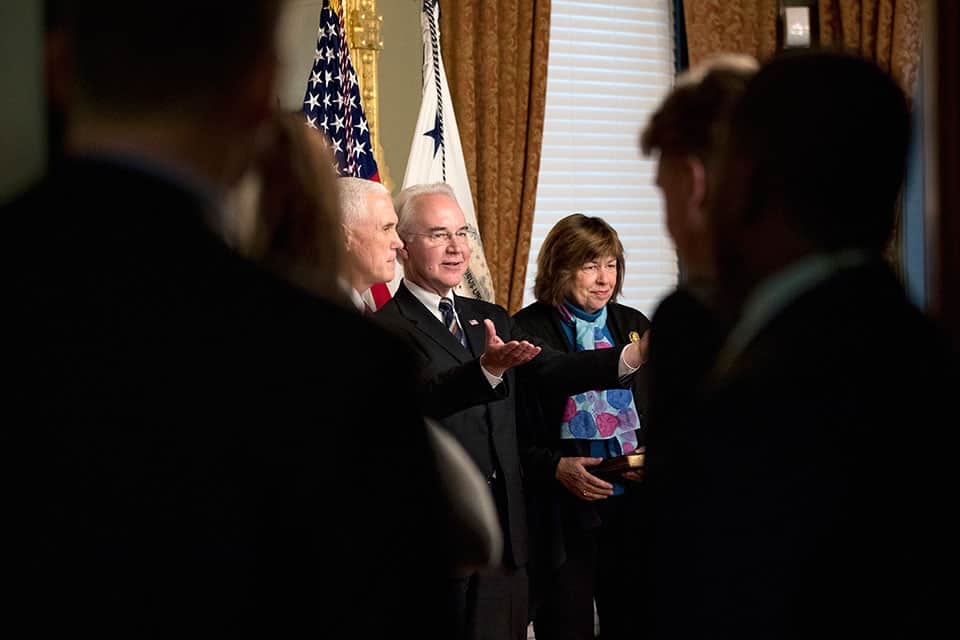 WASHINGTON— The Trump administration took steps Wednesday intended to help calm jittery insurance companies and make tax compliance with former President Barack Obama's health law less burdensome for some people.
But the changes could lead to plans with higher annual deductibles, according to the administration's own proposal. That seems to undercut President Donald Trump's assurance in a recent Washington Post interview that his plan would mean "lower numbers, much lower deductibles."

The moves announced separately by the Health and Human Services Department and the IRS don't amount to sweeping changes to the Affordable Care Act. That would fall to Congress, where Republicans are struggling to reach consensus over how to deliver on their promise to repeal and replace the health law. Progressive activists and leaders, including Oregon Gov. Kate Brown, have largely urged Congress to keep and expand the law, rather than repeal and replace it.

But the administration's actions do signal a change in direction.

For consumers, the proposed HHS rules mean tighter scrutiny of anyone trying to sign up for coverage outside of open enrollment by claiming a "special enrollment period" due to a change in life circumstances such as the birth of a child, marriage, or the loss of job-based insurance. Also, sign-up season will be 45 days, down from the current three months.

For insurers, the curbs on special enrollment periods are a big item. The industry claimed that some consumers were abusing special enrollment by signing up when they needed expensive treatments, only to drop out later.
Insurers would gain more flexibility to design low-premium plans tailored to younger people, yet that flexibility could lead to higher deductibles, according to the department.

"The proposed change ... could reduce the value of coverage for consumers," the proposal said. "However, in the longer run, providing (insurers) with additional flexibility could help stabilize premiums."

Larry Levitt of the nonpartisan Kaiser Family Foundation said "this would allow insurers to offer plans with higher deductibles, which seems counter to President's Trump promise to lower deductibles." A deductible is the annual amount consumers pay for medical care before their insurance kicks in.

Separately, the IRS is backing off from a tighter approach to enforcement that was in the works for this tax-filing season. The IRS said that's in line with Trump's executive order directing agencies to ease requirements of the health law.

Under the law, people are required to have health coverage or risk fines from the IRS — a penalty usually deducted from a taxpayer's refund. That underlying requirement remains on the books, and taxpayers are still legally obligated to comply, the IRS said.

But the agency is changing its approach to enforcement. Originally, the IRS had planned to start rejecting returns this year if a taxpayer failed to indicate whether he or she had coverage. Now the IRS says it will keep processing such returns, as it has in the past.

Many of the law's supporters consider the coverage requirement essential for nudging younger, healthy people into the insurance pool to keep premiums in check.

The IRS said in a statement that "taxpayers remain required to follow the law and pay what they may owe."

Administration officials said the HHS rules will help to stabilize the individual health insurance market for next year. That could buy time for congressional deliberations on the health care law. Trump's health secretary, former Rep. Tom Price, R-Ga., was confirmed only Friday.

The industry group America's Health Insurance Plans commended the administration, but said in a statement more is needed. In particular, insurers want Trump and Congress to remove a legal cloud over billions of dollars in subsidies that they are obligated to pay to cover deductibles and copayments for low-income people.

It remained unclear if insurers would be swayed. Only Tuesday, Humana announced it will not participate next year in the government-run marketplaces, where insurer exits have already diminished consumer choice.

"I don't necessarily think these changes are enough to alter insurers' decision-making about staying in the markets," said Caroline Pearson of the consulting firm Avalere Health.

Consumer reviews may be mixed, too, she said. Healthy people may appreciate more affordable premiums. But people with health problems could see an erosion in coverage.