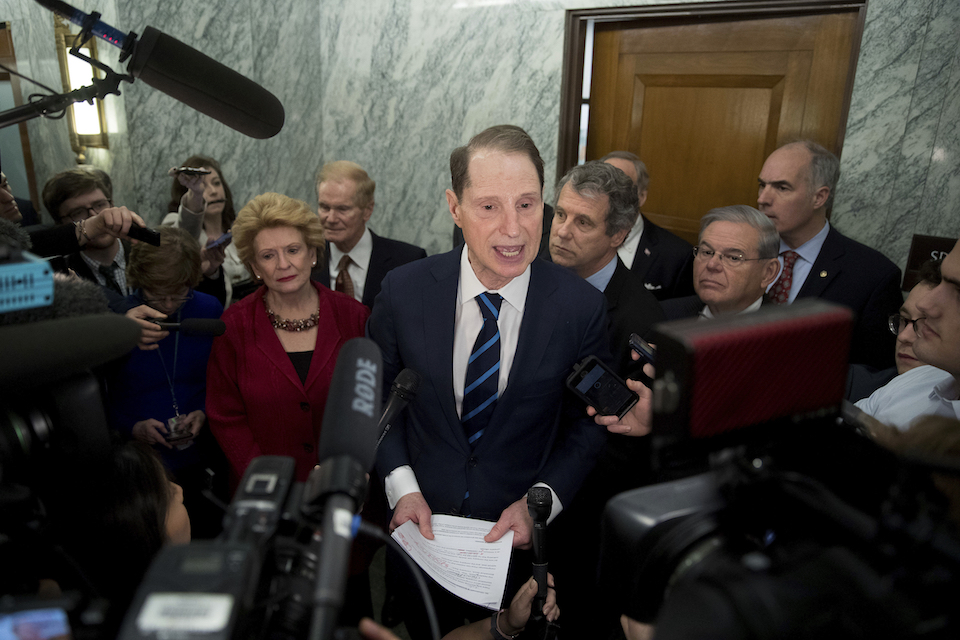 They accused both men of lying about their financial backgrounds, and since committee rules require at least one Democrat to be present, Republicans could not hold roll calls.

"He didn't tell the truth," the committee's top Democrat, Sen. Ron Wyden of Oregon, said of reports that Price received preferential treatment in purchasing stock in a biotech company.

The tactic infuriated Republicans, even though the GOP boycotted a committee vote on Gina McCarthy to head the Environmental Protection Agency in 2013 when Democrats ran the Senate.

The GOP also refused to consider former President Obama's Supreme Court nominee Merrick Garland, leaving the court with eight Justices instead of nine for most of the last year.

"They ought to stop posturing and acting like idiots," said committee Chairman Orrin Hatch, R-Utah. "Are they that bitter about Donald Trump? The answer has to be yes."

"He's been the fiercest, most dedicated defender in Congress of the Trump agenda," California's Dianne Feinstein, the senior Democrat on Judiciary, said of Sessions.

The clashes came as the opening days of the Trump administration have seen little of the honeymoon period new presidents usually experience. The chief battleground has been Trump's executive order temporarily blocking refugees worldwide and anyone from seven Muslim-majority nations.

With liberal groups pressing them to fight Trump and a brutal battle looming over his imminent pick for the Supreme Court vacancy, Tuesday's delaying tactics let Democrats signal they will use their limited power as the congressional minority to hamper the GOP.

Republicans said they would try reconvening the Finance committee Wednesday to see if Democrats would cooperate. Hatch planned to discuss the standoff with Wyden.

"It is time to get over the fact that they lost the election," he said. "The president is entitled to have his Cabinet appointments considered. None of this is going to lead to a different outcome."

The full Senate confirmed Elaine Chao to be transportation secretary, while committees advanced three other Trump picks, including wealthy GOP contributor Betsy DeVos to head the Education Department. DeVos is the sister of Erik Prince, CEO of the private military-for-hire group Blackwater now known as Academi.

Democrats said their objections to Price were prompted by a Wall Street Journal report in which officials of Innate Immunotherapeutics Ltd. said Price got a special offer to buy stock at a low price. Price had testified to Congress that the shares he purchased were available to all investors.

They've also opposed him for his support for repealing President Barack Obama's health care law and his plans to reshape Medicare and Medicaid, favorite Democratic programs.

On Mnuchin, Democrats cited an article in The Columbus Dispatch asserting that documents show he wasn't truthful with the Senate in describing how his bank, OneWest, had handled home foreclosures.

The newspaper said that bank used "robo-signing" for hundreds of mortgage documents, a technique critics associate with fraud, though Mnuchin said it had not done so.

Price and Mnuchin have said they've done nothing wrong and Republican lawmakers have stood by them.

The Senate confirmed Chao to be transportation secretary by 93-6. She was labor secretary under President George W. Bush, and is McConnell's wife.