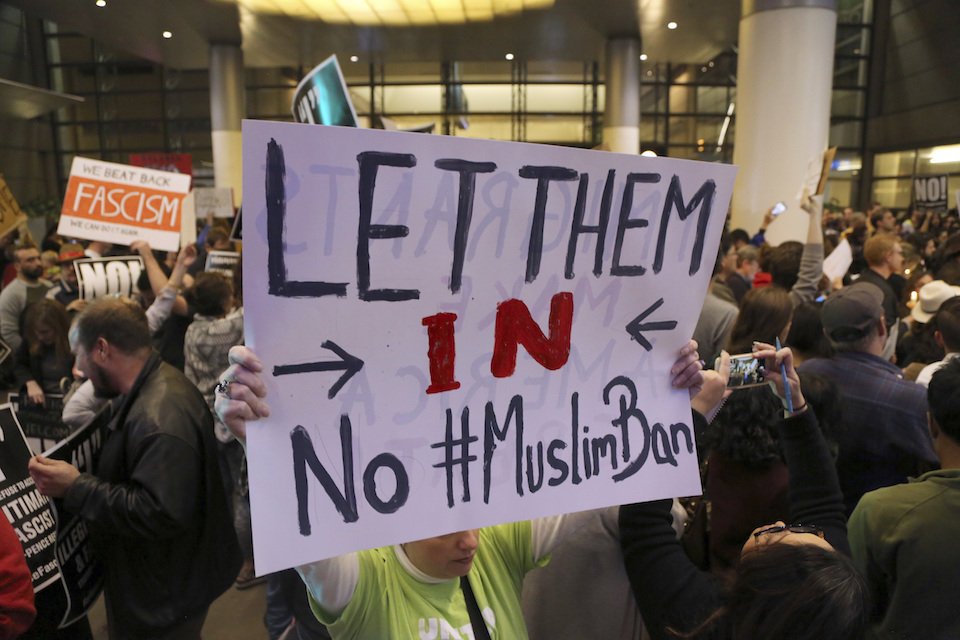 A look at what is happening:

Individuals who were detained at Seattle-Tacoma International Airport as a result of President Trump's executive order have been released by the Department of Homeland Security, a Port of Seattle spokeswoman said Sunday.

Kathy Roeder said DHS told port officials the individuals can continue their travels. She didn't know how many people had been released.

About 3,000 protesters holding signs and chanting "no hatred, no fear, immigrants are welcome here" and "let them in" gathered Saturday evening and continued demonstrating into early Sunday morning.

Roeder said the crowd dispersed shortly after midnight, but that about 30 to 35 were arrested during the demonstration and face various misdemeanor charges. She said there were no injuries or damage to the facilities.

The Port of Seattle Commissioners, which oversees the airport, issued a statement criticizing the executive order.

Cries of "Let them in!" rose up from a crowd of more than 2,000 people protesting at John F. Kennedy Airport, where 12 refugees were detained Saturday.

Celebrities including "Sex and the City" actress Cynthia Nixon joined the demonstration.

"What Donald Trump did in the last 24 hours is disgusting, disgraceful and completely un-American and I'm here in protest," said protester Pamela French.

The agency that runs the airport tried to restore order by shutting down the train that runs to airport terminals.

Gov. Andrew Cuomo, a Democrat, reversed that decision, saying people had a right to protest.

"The people of New York will have their voices heard," he said in a statement.

NorthJersey.com reports that they joined lawyers who'd rushed to the airport to defend the rights of refugees and immigrants who were being detained and denied entry.

Dozens of protesters inside Washington Dulles International Airport chanted "Love, Not Hate, Makes America Great" and "Say It Loud, Say it Clear, Muslims Are Welcome Here," as travelers walked through a terminal to a baggage claim area to collect luggage and greet their loved ones.

There was a heavy police presence during the peaceful protest.

Virginia Gov. Terry McAuliffe said during a press conference at Dulles that he has asked Virginia Attorney General Mark Herring to look into "all legal remedies" available to help individuals who may be detained in Virginia.

Dozens of people converged on Denver International to show their support for refugees.

Standing in the main terminal Saturday, they sang "Refugees are welcome here."

Some held signs declaring their identity, such as Jew or Christian, and the phrase "I come in peace."

Denver has some direct international flights but it wasn't clear whether anyone has been detained under the president's executive order.

A crowd of demonstrators held a rally at O'Hare International Airport. The Chicago Sun-Times reports protesters blocked vehicle traffic to O'Hare's international terminal for a time.

The newspaper says some arriving travelers joined the protest, while others were upset by the demonstrations.

Lawyers working with the International Refugee Assistance Project tell the Chicago Tribune that 17 people who had been detained at O'Hare all released by late Saturday.

Among those released before the federal judge's order was Hessan Noorian, a suburban Park Ridge resident returning with his family from Iran, the Tribune reported.

Noorian, who is of British and Iranian citizenship and has a green card, was detained at O'Hare after he and his wife, Zahra Amirisefat, a U.S.  citizen, arrived from Tehran, the newspaper said.

The couple, who told the Tribune that they work at a community college in the Chicago area, said they were questioned for five hours.

After Noorian was released, his wife told the Tribune: "I can't believe something like this can happen to someone with a green card."

The crowd of a few dozen ballooned into hundreds of demonstrators who frequently chanted "Set them free!"

At times, cheers erupted from the crowd as those who were detained got released.

Among those still held at the Dallas-Fort Worth International Airport at midnight Saturday was a 70-year-old Iranian widow, Shahin Hassanpour, whose son said she suffers from high blood pressure and had breast cancer surgery four years ago.

She obtained an immigrant visa in November on her son's petition.

Bahzad Honarjou, a 43-year-old network engineer, said he spoke twice to his mother by phone after her 9 a.m. arrival, but that they hadn't talked since courts stayed the executive order, meaning she should have been released.

Hundreds of protesters stood in the waiting area and chanted "This is what democracy looks like."

Immigration agents were not being very communicative, Honarjou said.

"They were like a machine when I talked to them today," he said. His mother only speaks a few words of English and a fellow passenger was translating for her from her native Farsi as no immigration agents spoke the language, he said.

Hassanpour was originally going to be deported on a Sunday flight, she informed her son the first time they spoke.

"She was about to cry," he said. "She is not able to take (tolerate) a 20-hour flight back to Iran."
Honarjou said he is a U.S. citizen, obtained entry in a lottery, and has been in the country for seven years. Why did he come?

"To have a better life and to make more money," he said. "And, you know, for the freedom." 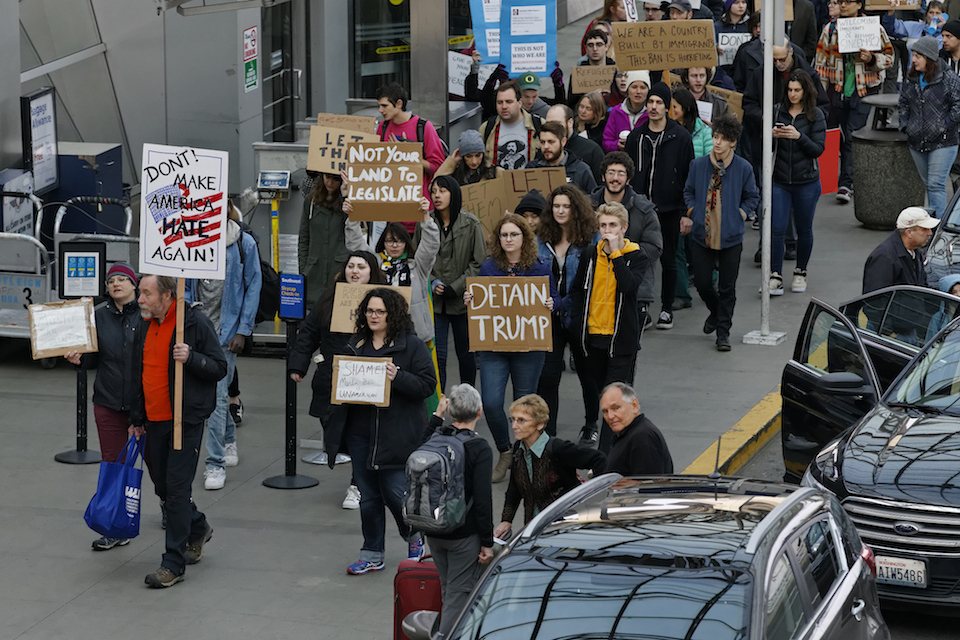 PHOTO: Dozens of demonstrators marched in and around the main terminal at Portland International Airport, to protest President Donald Trump's order restricting immigration into the U.S., Saturday, Jan. 28, 2017, in Portland, Ore. (Mike Zacchino/The Oregonian via AP)

A protest by several dozen people in and around Portland International Airport briefly disrupted light rail service at the airport.

The Oregonian/OregonLive reports that the demonstrators carried signs and chanted "Say it loud, say it clear, refugees are welcome here" and "No ban no wall America is for us all."

About 300 people expressed their displeasure with the ban at Los Angeles International Airport Saturday night.

Avriel Epps held a candle and a large photo a drowned 3-year-old Syrian boy who washed up on a Turkish beach in 2015 and became a haunting symbol of the Syrian refugee crisis.

Hundreds of protesters blocked the street outside at San Francisco International Airport's international terminal to express their opposition to the barring of some people from Muslim-majority nations.

SAN DIEGO
As motorists honked their support, demonstrators outside San Diego International Airport chanted "No hate, no fear, everyone is welcome here."