What We Learned from the First Week of the Trump Presidency 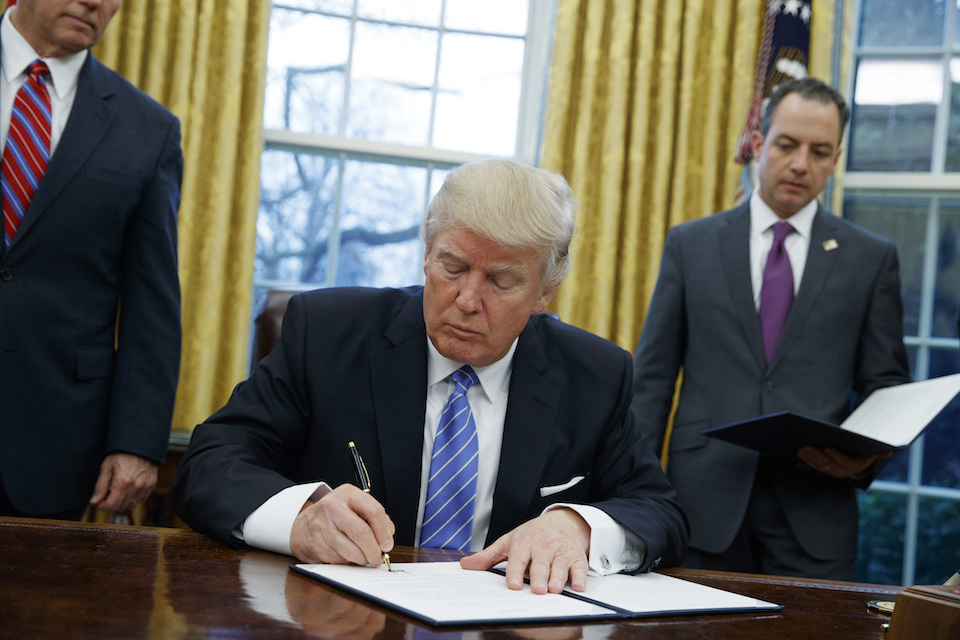 WASHINGTON (AP) — It's been a getting-to-know-you first week for both President Donald Trump and the nation.

Trump's personal traits on display during the campaign seemed more pronounced in the august setting of the White House.

The new president made haste to turn "the Trump effect" into action.

Some prominent themes from week one of Trump:

On an almost daily basis, Trump demonstrated his fixation with putting a yard stick to the size of his support.

He vastly overstated turnout for his inauguration — repeatedly. He revived unsubstantiated claims that he lost the popular vote to Democrat Hillary Clinton only because 3 million to 5 million people voted illegally.

He rehearsed anew details of his "great victory" in November. He complained in advance that the press would undercount the size of Friday's anti-abortion rally in Washington. At the CIA, he speculated "probably almost everybody in this room voted for me."

The tussle over the size of the inaugural crowd led Trump senior adviser Kellyanne Conway to introduce a new phrase to the lexicon: "alternative facts."

Trump held a series of meetings and signed a number of executive orders and actions in his first week aimed at showing he was ready to deliver on top campaign promises on everything from unwinding President Barack Obama's health law to building a wall on the Mexican border and ditching the trans-Pacific trade deal.

By Day 2, Conway was suggesting an "unbelievable" level of presidential activity. "Everything in Trump world feels like we did it in dog years," she told one TV interviewer. "You have to multiply it by seven."

And Trump used his first weekly radio and Internet address to say his administration "has hit the ground running at a record pace, everybody is talking about it."

Caveat: All modern presidents have tried to get off to a quick start in their first week in office.

Trump added some drama to week one by getting into a very public international spat with a key U.S. ally.

The president first announced a scheduled meeting with Mexico's president, then suggested maybe Enrique Pena Nieto shouldn't come if he didn't agree that Mexico should pay for the border wall.

Pena Nieto quickly took the hint and the meeting was off. The dispute between two nations with $1.6 billion a day in cross-border trade played out — where else? — on Twitter.

The two leaders did talk by phone for an hour on Friday in what Trump called a "very, very friendly call."

But former Mexican President Vicente Fox said the spat had put relations between the two countries "at the very lowest point since the war between Mexico and the United States."

Trump seized on any opportunity to do battle in what he labeled a "running war" with the press. On his first full day in office, he called journalists "among the most dishonest people on earth."

Another day he groused: "Nothing fair about the media. Nothing."

At the same time, Trump showed he's happy to use the press when it works to his advantage.

When aides ushered reporters out of a Roosevelt Room event as a union leader began praising Trump's inaugural address, the president called out: "Hey, press, get back in here."

At a Friday news conference, the often confrontational presidential told a British reporter who had questioned whether the president could be believed: "Actually, I'm not as brash as you might think."

The details for how to fulfill some of Trump's crystal clear campaign promises began to look fuzzy as the week went on, with the plan for getting Mexico to pay for the border wall emerging as Exhibit A.

Trump told one TV interviewer it could get "complicated."

Press secretary Sean Spicer announced at one point that the administration was working with Congress on a plan to impose a 20 percent tax on Mexican imports.

Less than an hour later, Spicer summoned reporters to his office to hedge that the tax was "just one option" and no final decision had been made.

What's the chatter on TV? You might get an idea from listening to the new president.

Trump watchers have been noticing a connection between the talk on TV and the subjects of Trump tweets.

Shortly after a CNN show interviewed Texan Gregg Phillips, who has made unsubstantiated allegations of voter fraud, Trump tweeted that he looked forward to seeing what Phillips uncovers.

First word that Trump was renewing his complaints about widespread voter fraud in the presidential election leaked from a closed meeting that he held with Senate leaders from both parties.

Trump seemed dismayed that word had gotten out from a meeting that was supposed to be confidential.

"The deal was we wouldn't talk to the press," Trump groused to a TV interviewer.

"And they go out and they talk to the press."

Given the porousness of leaky Washington, it would have been a bigger shock if meeting details hadn't leaked.

Trump called it a "surreal" experience to suddenly be parachuted into life in the White House.

He revealed to one interviewer that during his Inauguration Day ride with Obama from the White House to the Capitol for the swearing-in, he turned to the outgoing president and said: "This is a little weird, isn't it?"