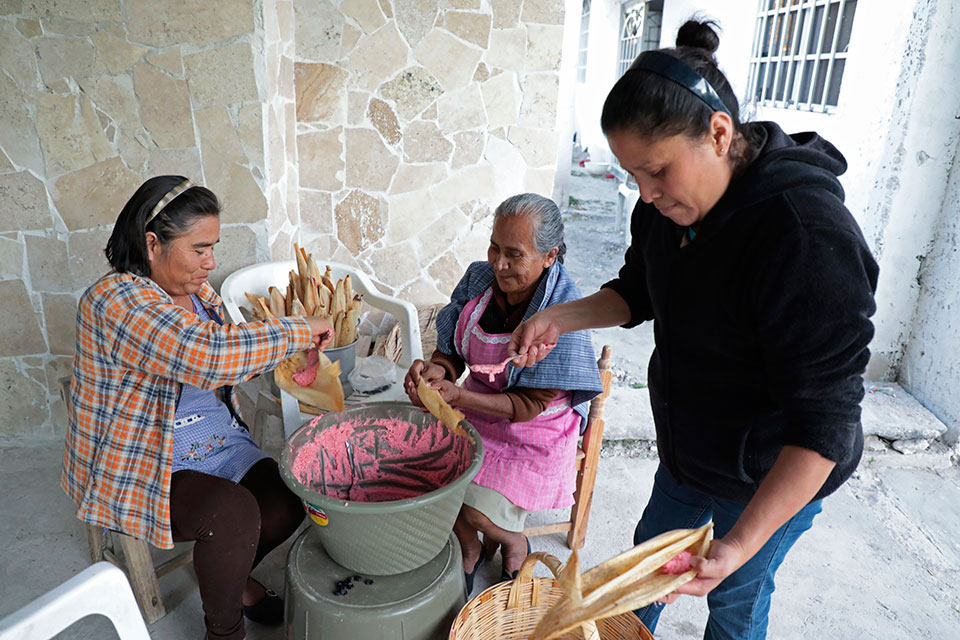 MOLCAXAC, Mexico— Tamara Alcala Dominguez sobbed, barely able to speak, as she buried her face in the sweater of the woman who cared for her when she was a toddler.
"My little girl, I hugged you so much," Petra Bello Suarez tearfully told her now 23-year-old granddaughter. "I have you in my arms, my girl. ... You found me still alive."

Alcala's mother left her with Bello at age 2 when she went to seek a better life in the United States. A year later, the little girl joined her mother — and for two decades Alcala's undocumented status prevented her from returning to Mexico.

Then she became one of the hundreds of thousands protected from deportation under an Obama administration program known as DACA, or Deferred Action for Childhood Arrivals, which gave work permits to immigrants brought to the U.S as children and living in the country illegally.

Alcala burst out of the shadows. In her American home in Everett, Washington, she got an officially sanctioned job and pursued an education with dreams of becoming a doctor. And last year she enrolled in a special program that allowed her to make this, her first journey back to Mexico, and then return safely again to the United States.

Grandmother and grandchild spent nearly two weeks catching up on 20 years, a reunion made bittersweet by the uncertainty ahead: They said their goodbyes just before Donald Trump took office amid vows to undo the protections his predecessor put in place, promises that leave immigrants worried about what comes next.

For Alcala, the trip may have been either a last opportunity to see her grandmother, or a chance to reacquaint herself with her native land in case she winds up deported.

"It brings a lot of peace of mind to know that I was able to interact with her at least once," she said, "before whatever happens in the future."

In the weeks just before Trump was sworn in, more than two dozen young immigrants made the same journey as Alcala back to Mexico under a provision of DACA that lets recipients apply to leave the U.S. for academic reasons or family emergencies and then legally return. The Associated Press traveled with them.

More than 100 former child migrants have made five such trips sponsored by California State University, Long Beach — emotional journeys to what is often a barely remembered homeland, to reunite with family seen only in photos or on Skype. The students on this trip joined long-lost relatives for Christmas, then gathered after the new year for an academic course in Cuernavaca before flying home to America.

About 750,000 immigrants have enrolled in DACA. Legislation that would have included similar protections, called the DREAM Act, failed to get through Congress, prompting President Barack Obama to create the program with an executive action in 2012.

Trump, as part of his tough talk on immigration, has vowed to end DACA, which he calls illegal amnesty. Moderate Republicans are keenly aware of the political dangers of deporting college students and breaking up families. At a town hall Jan. 12, House Speaker Paul Ryan said Republicans had been working with the Trump team on a solution and vowed there would be no "deportation force" to round up people living in the country illegally.

Soft-spoken and shy, Alcala's demeanor reflects an upbringing living with fear of deportation. Growing up, her family mostly kept to themselves and a few friends. Alcala's mother encouraged her not to speak Spanish outside the home to avoid attracting attention. She wasn't to let on that she was Mexican, and never to tell people where her mother worked.

"I always felt like I always had to hide everything," Alcala said.

Through high school, Alcala was content with her under-the-table restaurant job. But as college neared, the limitations of her legal status became increasingly clear. Her job was never going to be enough to pay for tuition. She began to question why her mother brought her to the U.S.

Then at age 19 her life changed. News popped up on her phone one day about Obama's executive action. She arrived at her restaurant job with puffy eyes, determined to immediately apply for DACA. Once accepted, she quit the restaurant job and pursued a student position in a lab at the University of Washington. She recently graduated, and is working while studying for medical school entry exams.

Last year, Alcala stumbled on a blog that talked about how some people with protection under DACA could travel, and that led her to the CSU Long Beach program to help migrants rediscover their roots. With her grandmother 75 years old and suffering from hypertension, diabetes and other ailments, Alcala was determined not to repeat the anguish she felt when her grandfather died of prostate cancer before she could see him.

Alcala arrived in Mexico City just before Christmas, and soon was on the road to her birthplace of Molcaxac. There, she dined on salty carne asada and the rich mole sauce for which Puebla state is famous. She leaned her head on her grandmother's shoulder while flipping through cellphone photos. She played hide-and-seek with cousins.

Alcala followed Bello everywhere — to the store, to meet neighbors, to the town holiday party. They said goodbye just after the new year, with Alcala's grandmother promising to teach her more the next time they reunite. "I told her this still wasn't the last goodbye," Alcala said. "I told her I'd find a way to go visit her."

On Inauguration Day, Alcala was back in Washington state as all eyes were on Trump and the new immigration policies to come.

Alcala doesn't know what she'll do if her DACA protection ends under Trump; because her younger sister was born in the U.S., Alcala could apply for a family reunification visa.

But sibling sponsorship is a long road, with a backlogged application process.

For now, she's grateful for both her life in the United States and the short time she had back in Mexico.

"Before, I was just thinking the worst," she said. "If I get deported ... I had no clue what'd be awaiting me."

And as she settled back into life in the country she — for now — calls home, Alcala had a message for President Trump:

"What's the worst you can do, send me back to Mexico? Now I know I can succeed (in Mexico) or in the States. It was a great burden off my shoulders ... to not fear Mexico."