Trump Amid Combative Start Pledges to Rise to Moment 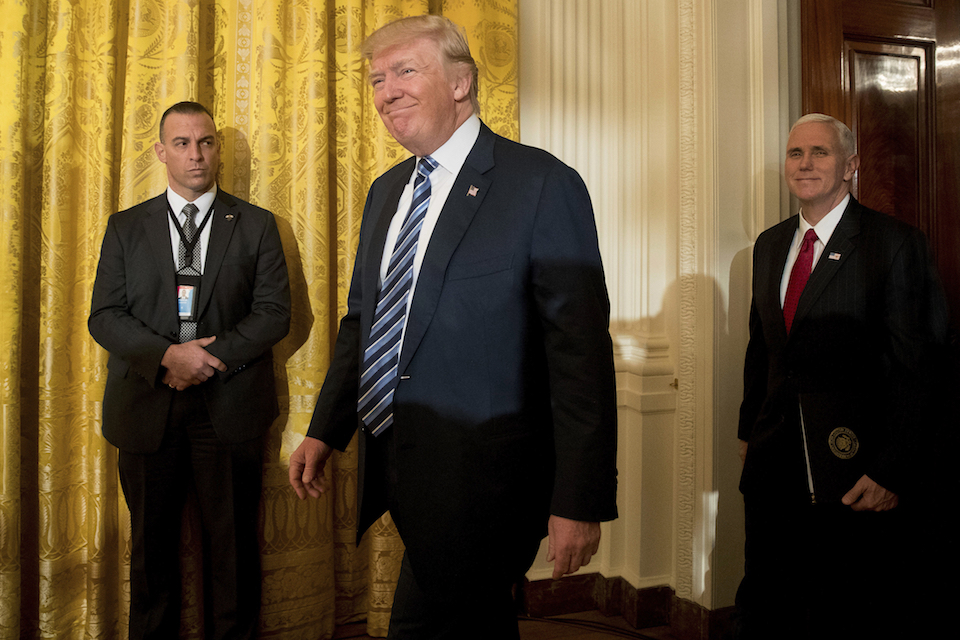 WASHINGTON (AP) — After a combative start to his presidency, Donald Trump delivered a more unifying message Sunday and sought to reassure Americans he was ready to begin governing a divided nation.

Trump began rolling out his plans for diplomatic outreach, speaking with Israeli Prime Minister Benjamin Netanyahu and announcing plans for early meetings with Netanyahu and other world leaders. He thanked top law enforcement officers for their service and support. And he swore-in a group of aides, telling them he believed they were ready to rise to a daunting task.

Trump's reassurance came after a day marked by global protests against his presidency and his own complaints about media coverage of his inauguration, a combination of events that made for a contentious first full day in office on Saturday. 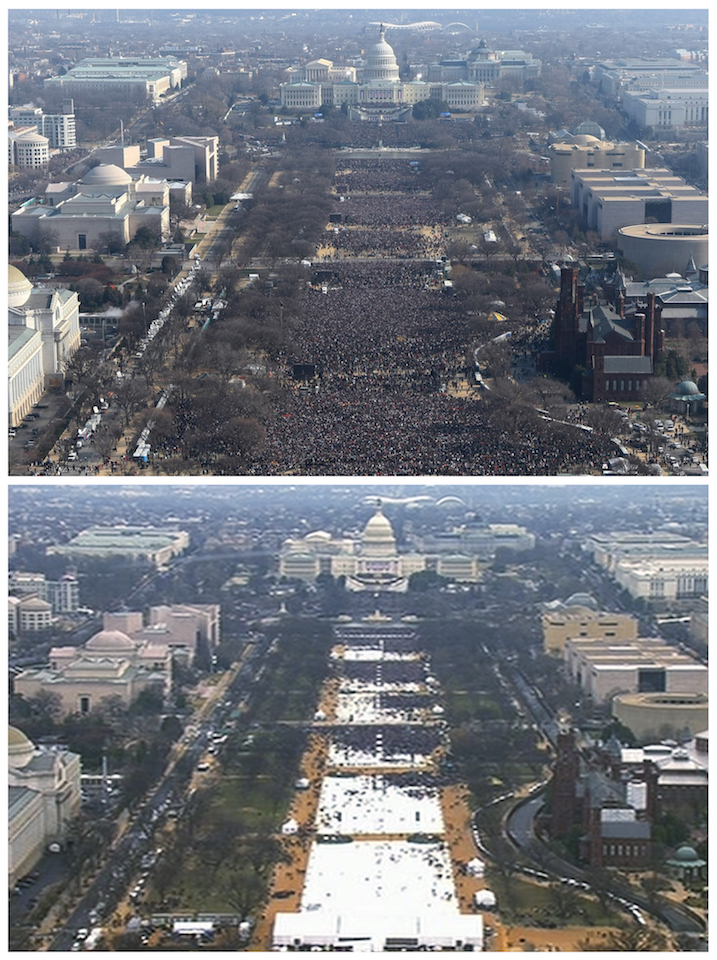 PHOTO: This pair of photos shows a view of the crowd on the National Mall at the inaugurations of President Barack Obama, above, on Jan. 20, 2009, and President Donald Trump, below, on Jan. 20, 2017. The photo above and the screengrab from video below were both shot shortly before noon from the top of the Washington Monument. (AP Photo)

But even as the White House tried to forge forward, the president's aides continued to defend the president and his press secretary, both of whom tore into journalists for accurately reporting that his swearing-in ceremony drew a smaller crowd than President Barack Obama did eight years ago. On Sunday, a top adviser said the Trump administration was supplying "alternative facts."

"There's no way to really quantify crowds. We all know that. You can laugh at me all you want," Kellyanne Conway told NBC's "Meet The Press." She added: "I think it's actually symbolic of the way we're treated by the press."

Trump on Saturday declared he believed "it looked like a million and a half people."

But ridership on the Washington's Metro system didn't match that of recent inaugurations. As of 11 a.m. Friday, there were 193,000 trips taken, according to the transportation service's Twitter account.

Conway also declared that Trump will not release his tax returns now that he's taken office, breaking a promise he made during the campaign.

As a candidate, he said he would release his returns after an IRS audit was completed. Every president since 1976 has released the information, but Conway said she does not believe Americans care whether Trump follows suit. More than 100,000 people have signed a petition on the White House website asking Trump to release his tax returns.

"He's not going to release his tax returns. We litigated this all through the election. People didn't care," Conway said on ABC's "This Week."

Trump's advisers have set Monday up as the president's first major day of action on his sweeping campaign promises, but as of Sunday night, it appeared as though his team was still making decisions on what moves to make. Some congressional Republicans had expected Trump to sign orders over the weekend, but those never materialized.

Trump campaigned on a very specific 18-point plan for this first day in office. If he follows it, he could sign executive orders on immigration, trade and national security. Trump has pledged to scuttle trade deals such as a pending Asia-Pacific agreement and overturn Obama's executive order deferring deportations for 700,000 people who were brought into the country illegally as children.

He's due to begin formally discussing his agenda Monday at a meeting with a bipartisan group of congressional leaders.

Trump's early call to Netanyahu was aimed at signaling his support for Israel and a new start in a relationship that became increasingly fraught during the Obama administration. Trump described that conversation as "very nice." White House officials said Trump "affirmed his unprecedented commitment to Israel's security." The leaders agree to meet at the White House in early February.

"We're going to start some negotiations having to do with NAFTA," he said of his meeting with Mexico, along with immigration and security at the border. Trump has promised to build a wall along the length of the southern border and insisted that Mexico will pay for it.

The new president showed he was clinging to some of his pre-presidential habits. He responded to Saturday's protests on Twitter, offering a scattershot response. In one tweet, he sarcastically denigrating the public opposition and then defended demonstrators' rights a short time later.

"Watched protests yesterday but was under the impression that we just had an election! Why didn't these people vote? Celebs hurt cause badly," Trump tweeted early Sunday morning. Ninety-five minutes later, he struck a more conciliatory tone.

"Peaceful protests are a hallmark of our democracy. Even if I don't always agree, I recognize the rights of people to express their views," the president tweeted, still using his personal account.

The dueling tweets marked his administration's first response to the more than 1 million people who rallied at women's marches in Washington and cities across the world. Hundreds of protesters lined the street as Trump's motorcade drove past on Saturday afternoon, with many screaming and chanting.

Trump, whose 12th wedding anniversary was Sunday, also attended a reception for law enforcement officers and first responders who helped with his inauguration. He singled out the work of FBI Director James Comey, whom he offered a handshake and hug.