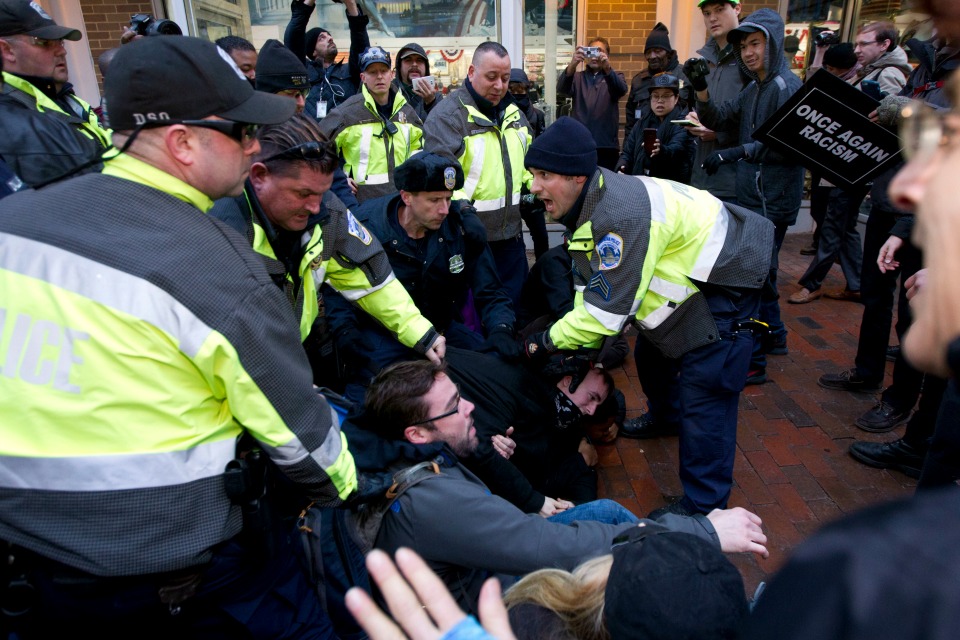 WASHINGTON (AP) — Police deployed pepper spray and made numerous arrests in a chaotic confrontation blocks from Donald Trump's inauguration Friday as protesters registered their rage against the new president.

But at one point, police gave chase to a group of about 100 protesters who smashed the windows of downtown businesses including a Starbucks, Bank of America and McDonald's as they denounced capitalism and Trump. Police in riot gear used pepper spray from large canisters and eventually cordoned off the protesters.

Police said in a statement that the group damaged vehicles, destroyed property and set small fires while armed with crowbars and hammers. Police said "numerous" people were arrested and charged with rioting.

The confrontation happened about an hour before Trump was sworn in and began giving his inaugural address at the Capitol. Several hours later, the crowd of protesters still at the tense scene — at 12th and L streets in northwest Washington — had grown to about 1,000, some wearing gas masks and with arms chained together inside PVC pipe. One said the demonstrators were "bringing in the cavalry."

Before Inauguration Day, the DisruptJ20 coalition, named after the date of the inauguration, had promised that people participating in its actions in Washington would attempt to shut down the celebrations, risking arrest when necessary.

Earlier in the day, as guests were going in to the ceremony, lines for ticket-holders entering two gates stretched for blocks at one point as protesters clogged entrances.

Trump supporter Brett Ecker said the protesters were frustrating but weren't going to put a damper on his day.

"They're just here to stir up trouble," said the 36-year-old public school teacher. "It upsets me a little bit that people choose to do this, but yet again, it's one of the things I love about this country."

At one checkpoint, protesters wore orange jumpsuits with black hoods over their faces to represent prisoners in U.S. detention at Guantanamo Bay. Eleanor Goldfield, who helped organize the Disrupt J20 protest, said protesters wanted to show Trump and his "misguided, misinformed or just plain dangerous" supporters that they won't be silent.

Most Trump supporters walking to the inauguration past Union Station ignored protesters outside the train station, but not Doug Rahm, who engaged in a lengthy and sometimes profane yelling match with them. "Get a job," said Rahm, a Bikers for Trump member from Philadelphia. "Stop crying, snowflakes, Trump won."

More demonstrations were planned for later in the day. The "Festival of Resistance" march ran about 1.5 miles to McPherson Square, a park about three blocks from the White House, where a rally featuring the filmmaker and liberal activist Michael Moore was planned.

Friday's protests weren't the first of the inauguration. On Thursday night, protesters and Trump supporters clashed outside a pro-Trump event in Washington. Police used chemical spray on some protesters in an effort to control the unruly crowd.

The demonstrations won't end when Trump takes up residence in the White House. A massive Women's March on Washington is planned for Saturday. Christopher Geldart, the District of Columbia's homeland security director, has said 1,800 buses have registered to park in the city Saturday, which could mean nearly 100,000 people coming in just by bus.