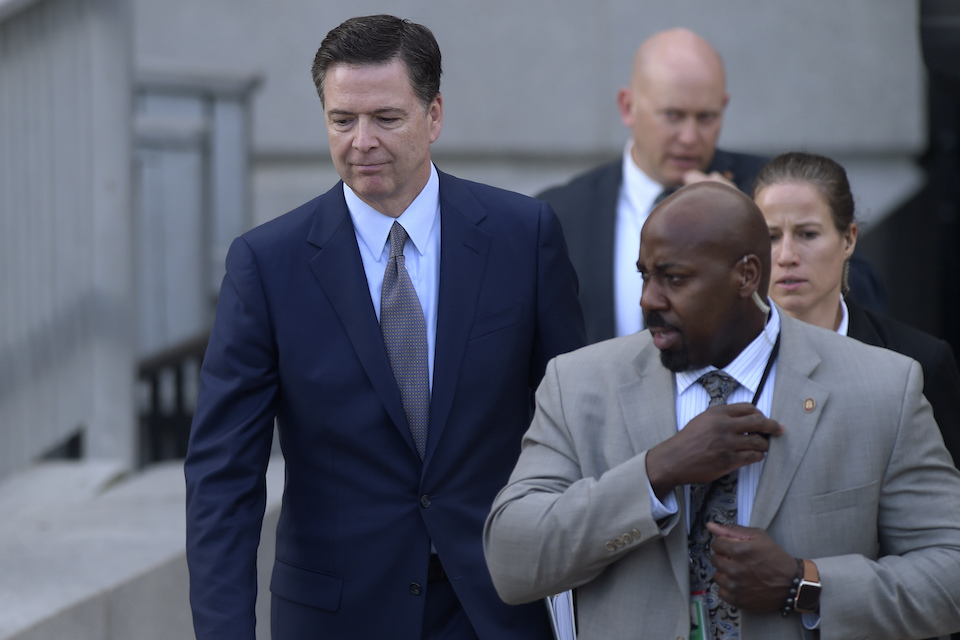 WASHINGTON (AP) — House Democrats still seething over FBI Director James Comey's handling of the election-year inquiry of Hillary Clinton confronted the law enforcement officer over his refusal to say whether the FBI is investigating possible links between President-elect Donald Trump's campaign and Russia.

The contentious, closed-door session Friday reflected the frustration of Democrats who blame Comey's statements and actions in part for Clinton's loss to Trump.

In July, Comey announced the findings of the FBI investigation that found Clinton's use of a private email server was "extremely careless" but not criminal. Then, days before the Nov. 8 election, he sent two letters to Congress, one announcing a review of newly found emails and then another saying there was no evidence of wrongdoing.

The Justice Department inspector general announced this week that he is investigating Comey and the department.

Democrats and Republicans who attended the all-member briefing on Friday with Comey and senior intelligence officials said several lawmakers pressed him in a tense session about his refusal to say whether there is an examination of alleged contacts between members of the Trump campaign and Russia.

Trump adviser Michael Flynn made calls to the Russian ambassador to the US at the same time President Obama was preparing sanctions against Russia and the incoming administration has signalled it could drop those sanctions.

Clearly frustrated with Comey was Rep. Debbie Wasserman Schultz, D-Fla., who was forced to resign as head of the Democratic National Committee after hacked emails surfaced that suggested the party operation favored Clinton over her primary rival, Sen. Bernie Sanders, I-Vt.

She confronted Comey, according to a Democrat who attended the briefing. Lawmakers and other congressional officials spoke on condition of anonymity to freely discuss the private meeting.

Trump and his supporters have staunchly resisted the findings and Trump has leveled a series of broadsides at U.S. intelligence agencies, even though he'll have to rely on their expertise to help him make major national security decisions once he takes over at the White House next week. He will be sworn in Jan. 20.

"There is a great deal of evidence to say that this is a high - an issue of high interest to the American people," Pelosi said. "The strength, the integrity of our own democracy. And that for that reason, the FBI should let us know whether they're making - doing that investigation or not. They're usually inscrutable, as you saw in the public testimony in the Senate."

"I would never comment on investigations — whether we have one or not — in an open forum like this so I can't answer one way or another," Comey told the panel.

Late Friday, the Senate Intelligence Committee announced it would investigate possible contacts between Russia and the people associated with U.S. political campaigns as part of a broader investigation into Moscow's meddling in the 2016 presidential election.

In a statement, Sens. Richard Burr, R-N.C., the committee's chairman, and Mark Warner, D-Va., the panel's top Democrat, said the panel "will follow the intelligence where it leads."

Burr and Warner said that as part of the investigation they will interview senior officials from the Obama administration and the incoming Trump administration. They said subpoenas would be issued "if necessary to compel testimony."

According to the committee's statement, the inquiry will include:

— A review of the intelligence that informed the declassified report about Russia's interference in the election.
— "Counterintelligence concerns" related to Russia and the election, "including any intelligence regarding links between Russia and individuals associated with political campaigns."
— Russian cyber activity and other "active measures" against the United States during the election and more broadly.