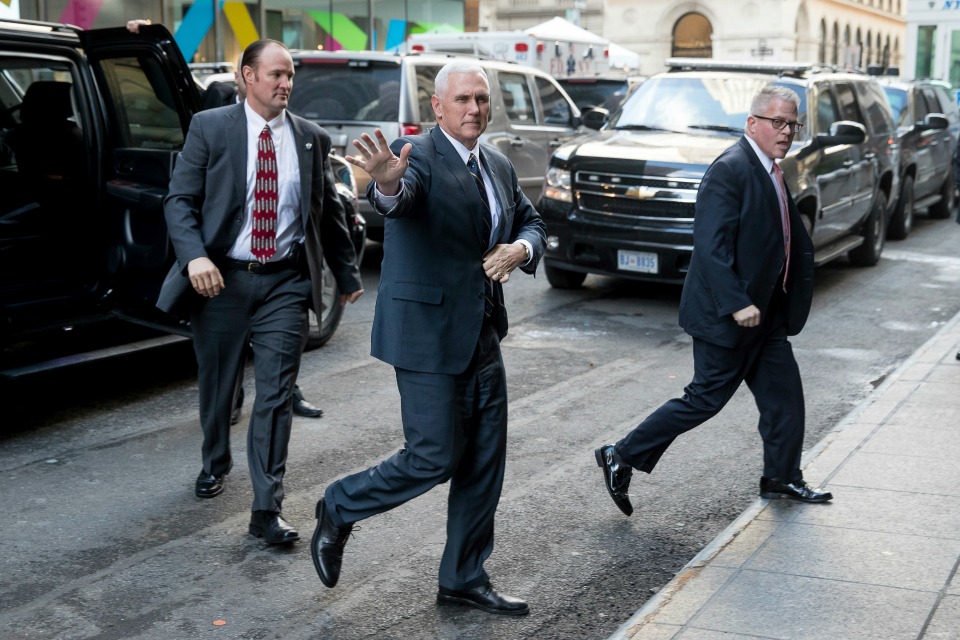 Senate Minority Leader Chuck Schumer says Republicans should be just as alarmed as Democrats that Russia could interfere in the U.S. political process.

The New York Democrat says the new declassified report on Russian hacking of the 2016 presidential election "should send shivers down the spines of both political parties, regardless of which party benefited this time around."

He is also repeating his call for the formation of a special panel to investigate Russia's interference if Republican plans for examining Moscow's meddling come up short.

He says if the Senate Armed Services and Intelligence committees don't operate "in a truly bipartisan way" and make most of their findings public, "we will need to establish a select committee to get to the bottom of this."

Senior Republicans have rejected that idea.

Top House Democrat Nancy Pelosi says a new report by the intelligence community proves that Russia's hacking of the election was "political thuggery in support of Donald Trump."

The California congresswoman says Russia's President Vladimir Putin ordered an "assault on American democracy" with the computer hacks, which resulted in steady, negative leaks about Hillary Clinton's campaign and actions by the Democratic National Committee.

Pelosi formerly served on the House Intelligence panel. She says the new report shows that an independent, bipartisan panel should conduct an investigation.

U.S. intelligence officials say this could supply Russia with new material for future influence operations or provide intelligence on the incoming Trump administration's goals and plans.

Intelligence officials say in their new public report on Russian hacking that they believe with high confidence that Moscow's intelligence services relayed to WikiLeaks material it hacked from the Democratic National Committee and senior Democratic officials.

The report says the emails disclosed by WikiLeaks did not appear to contain any forged material.

Intelligence officials say the Russians had access to the DNC from July 2015 to at least June 2016.

They say the Russian intelligence agencies probably began cyber operations targeting the U.S. election by March 2016 and had stolen large volumes of data from the DNC by May 2016.

Ryan is also echoing Donald Trump's take on the intelligence report released Friday: that the hacking by the Russians didn't affect the outcome and that Trump "won this election fair and square."

Rep. Adam Schiff of California, the ranking Democrat on the House intelligence committee, says the report makes clear that the Russian intervention was directed by President Vladimir Putin himself and not only was aimed at sowing discord in the United States, but also was motivated by a desire to help Trump's election chances.

He says Trump's statement that Russian hacking had no effect on the outcome of the election is not supported by the report or common sense.

The Senate Intelligence Committee's top Democrat says the new declassified report about Russian meddling in the U.S. election shows Moscow interfered with "the goal of harming the candidacy of Hillary Clinton and boosting the candidacy of President-elect Donald Trump."

Sen. Mark Warner of Virginia says the report is "well in line with previous assessments from the intelligence community" that senior Russian officials carried out an unprecedented level of interference in the 2016 election.

Warner says the findings demonstrate "the important role of our nation's intelligence community and the men and women who work quietly every day to keep our country safe."

The intelligence community's new declassified report on Russian hacking says that before the election, Russian diplomats publicly denounced the U.S. electoral process and were prepared to publicly call into question the validity of the results.

The report says that based on Moscow's social media activity, pro-Kremlin bloggers had prepared a Twitter campaign — called (hashtag) DemocracyRIP, or Rest in Peace — on election night because they anticipated that Hillary Clinton would beat Donald Trump.

A newly declassified report on Russian hacking during the U.S. election says the Russian government developed a "clear preference for President-elect Donald Trump."

The report says the goal of Moscow's meddling was to undermine public faith in the U.S. democratic process, denigrate Democratic Party nominee Hillary Clinton and harm her electability and potential presidency.

U.S. intelligence officials released the 25-page public version of the report Friday, after they briefed President-elect Donald Trump and top lawmakers on Capitol Hill from a longer, classified version.

The report says Russian efforts to influence the 2016 presidential election represent the most recent expression of Moscow's long-standing desire to undermine the U.S.-led liberal democratic order. It says the scope of Russia's activities was significantly larger compared with previous operations.

After his briefing, Trump stopped short of embracing the intelligence community's assessment that Russia interfered in the presidential campaign, saying only that any hacking attempts had "absolutely no effect" on the outcome of the election.

President-elect Donald Trump says he wants his administration to develop a plan in its first 90 days to "aggressively combat and stop cyberattacks."

Trump, in a statement released shortly after the conclusion of his Friday meeting with intelligence officials, said the nation's "government, organizations, associations or businesses" all need to strengthen their cybersecurity efforts.

He adds that security "methods, tools and tactics" should "not be a public discussion that will benefit those who seek us do harm."

Trump has been deeply skeptical of the intelligence findings that claim that Russia was behined attempts to meddle with last year's elections.

President-elect Donald Trump is saying he had a "constructive meeting and conversation" with intelligence leaders on Friday but insists that any hacking attempts had "absolutely no effect" on the election outcome.

Trump did not say whether he agreed with the conclusions. He has previously been sharply critical of allegations that Russia tried to interfere with the election.

The president-elect says his own evidence that that the outcome was unaffected was because "there was no tampering whatsoever with voting machines."

Intelligence officials believe Russia was involved with the hacking of the Democratic National Committee.

President-elect Donald Trump says he is monitoring the situation in Florida in which a gunman opened fire in an airport, and that he has spoken with Florida Gov. Rick Scott.

Authorities say five people were killed and eight were wounded after a lone suspect began shooting at the Fort Lauderdale international Airport.

Trump tweeted, "Monitoring the terrible situation in Florida. Just spoke to Governor Scott. Thoughts and prayers for all. Stay safe!"

The White House says it was not the source of a report leaked to NBC on U.S. intelligence alleging Russia interfered in the presidential election.

He notes that two days ago, Trump tweeted a "steadfast defense of the integrity" of Wikileaks founder Julian Assange. Earnest called Assange "the leading purveyor" of the improper release of classified material.

Earnest says Trump's tweet "leads me to conclude that his concerns are about something other than protecting classified information."

The officials are Director of National Intelligence James Clapper, CIA Director John Brennan and FBI Director James Comey. They're preparing to point to multiple motives for Moscow's alleged meddling as they brief Trump on their classified report.

Trump has been deeply skeptical of allegations that Russia was involved.

Several advisers were to join Trump and Vice President-elect Mike Pence for the briefing. That includes his incoming chief of staff and national security adviser and the chiefs of the CIA and Homeland Security department.

Less than an hour before he was to be briefed Friday by the directors of the FBI and CIA and the Director of National Intelligence on their findings, Trump tweeted that he was "asking the chairs of the House and Senate committees to investigate top secret intelligence shared with NBC prior to me seeing it."

NBC aired a report Thursday that said the briefing would identify Russian actors involved in the hacking of the Democratic National Committee.

Trump has been deeply skeptical of the intelligence community's findings on Russia, suggesting that it was being used to de-legitimize his election.

The chairman of the Senate Foreign Relations Committee says he called Donald Trump on his cellphone a few days ago and the president-elect answered even though he didn't know who was on the line.

Sen. Bob Corker, a Tennessee Republican, recounted the episode Friday to reporters as an example of how accessible Trump and the rest of his transition team have been for him. Trump's nominee for secretary of state, former Exxon Mobil CEO Rex Tillerson, is scheduled to appear before Corker's committee next week for his confirmation hearing.

"On Sunday, I needed to talk to the president-elect about something," Corker says, "and I called him on his cellphone and he answered it and we talked."

Corker says his phone is programmed to read "no caller ID," but Trump took the call anyway.

The U.S. intelligence community will release the declassified version of the intelligence report about Russian hacking of the U.S. presidential campaign on Friday afternoon.

That's according to a U.S. official who wasn't authorized to comment publicly and requested anonymity.

House Minority leader Nancy Pelosi appeared to reference the planned release during a morning news conference. Pelosi says the intelligence report was "quite a stunning disclosure" and added that parts will be released Friday.

The declassified version contains fewer details than classified versions being made available to Congress, President Barack Obama and President-elect Donald Trump. But it's expected to shed more light on what evidence the U.S. government says it has that Russia was behind cyber interference in the campaign.

Obama had promised the report would be finished before he leaves office on Jan. 20.

Arnold Schwarzenegger is responding to Donald Trump's taunting on Twitter. The former California governor says the president-elect should work as hard to represent all Americans as he did for TV ratings.

Schwarzenegger also quotes President Abraham Lincoln's first inaugural address: "We are not enemies, but friends. We must not be enemies."

Early Friday, Trump mocked Schwarzenegger for low ratings in the spinoff of Trump's old reality television show, "Celebrity Apprentice." Trump said: "Wo much for being a movie star." Trump also referred to himself as a "ratings machine."

Schwarzenegger tweeted: "I wish you the best of luck and I hope you'll work for ALL of the American people as aggressively as you worked for your ratings."

The Republican chairman of the Senate Foreign Relations Committee is suggesting that portions of a secret intelligence report about Russian interference in the 2016 election are being leaked to media organizations for political reasons.

Speaking to reporters Friday, Sen. Bob Corker of Tennessee says he couldn't get any senior U.S. intelligence officials to attend a classified briefing his committee received Thursday on the administration's response to the alleged Russian hacking. He says he'll read a copy of the report next week along with other lawmakers.

"I can't get an intelligence person but I can read one of your publications this morning who's leaking out this information," Corker says. "It does make it feel political."

Corker says he believes the hacking report "is going to be very incriminating."

He says, "I believe the Russians have done very nefarious things."

Corker spoke at a breakfast sponsored by the Christian Science Monitor.

In an early Friday tweet, Trump refers to himself as a "ratings machine" and says Schwarzenegger "got 'swamped'" by comparison.

He tweets "so much for being a movie star," and "now compare him to my season 1."

Trump added: "But who cares, he supported Kasich & Hillary," referring to Ohio Republican Gov. John Kasich and Democrat Hillary Clinton, who both ran against him.

Schwarzenegger is a moderate Republican who said in October that he wouldn't vote for Trump, calling it a choice of "your country over your party." He's hosting "The New Celebrity Apprentice," in which Trump retains a producing stake.