The CBC Celebrates History with 49 Members in the 115th Congress 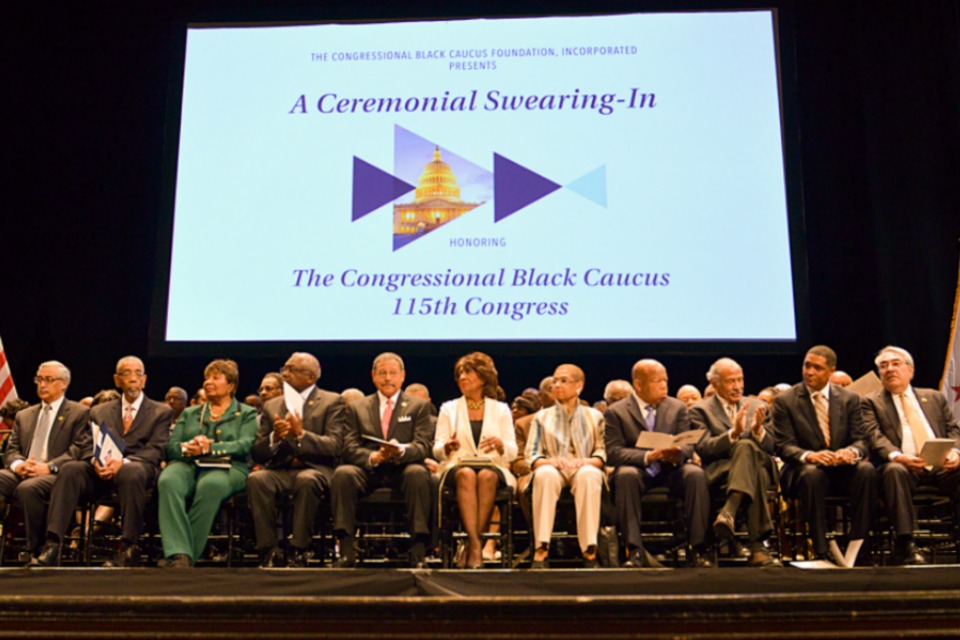 A. Shuanise Washington, the president and CEO of the CBCF, said that 115th Congress will have the largest CBC in history with 49 members.

“While the CBC grows in numbers, there remains a lack of diversity and inclusion when it comes to senior staff placement in senate and congressional offices,” said Washington. “The CBCF is committed to doing its part to change the landscape of Capitol Hill and we’re doing so with one of our newest initiatives: Emerge 535.”

Launched in 2013, the Emerge 535 program will enable the CBCF to expand opportunities for young people of color by providing 535 scholarships and fellowships to work on Capitol Hill.

Pelosi also noted the irony in the fact that some of the same Republicans, who attended the opening of the National Museum of African American History and Culture and the fiftieth anniversary of “Bloody Sunday” in Selma, Ala., refused to work with Democrats on Capitol Hill to restore the protections of the VRA.

“It’s not about Democrats, it’s not about Republicans, it’s about America,” said Pelosi. “The greatness of America is affected by how [Republicans] have rejected the ability of our president to appoint a [Supreme Court] justice, how they have rejected our calls for correcting the injustice of the Supreme Court decision [in Shelby v. Holder]. It’s all about justice.”

Pelosi called the CBC the “conscience of the Congress and indeed of the country,” and she added that it was exciting to see that some of the newest members of the CBC were representing districts who had never elected a Black lawmaker to serve in the U.S. Congress.

After the ceremonial oath of office was performed, outgoing Chairman G.K. Butterfield (D-N.C.) said that 2016 is now in our rearview mirror.

“We find ourselves facing a difficult, political and legislative environment, unlike any that we have ever seen before, but I promise you that the CBC will rise to the occasion and we will meet these new challenges,” said Butterfield. “The consequences are too enormous for us to be indecisive and to allow conservative forces and forces of the alt-right to defend our nation. WE will be strategic and we will be unified in our work.”

While many of the CBC members are “baby boomers,” Butterfield said that there is no question that Richmond, who is a part of Generation X, is well-suited and well-prepared to lead the CBC in confronting these new challenges.

“There are many Americans, especially Black Americans, who can’t understand how we got hear today, coming off eight years of hope, pride and inspiration,” said Richmond. “They are fearful of the current state of division, hate and pettiness.

Richmond continued: “Many of our young people are frustrated with the fact that they seem to be fighting the same causes that Dr. King and Reverend Jackson and John Lewis and many others galvanized the country behind during the Civil Rights Movement; and that’s jobs justice and common humanity.”

The Louisiana congressman noted that while others have thrown up their hands, hung their heads, paralyzed by frustration, CBC members have remained focused and driven.

Richmond acknowledged that members like Shirley Chisholm work on poverty and expanding opportunities for women in the labor force and children in the classroom, Charlie Rangel on economic inequality and John Conyers on criminal justice reform.

Richmond said that the CBC members are committed to do their part, to provide leadership, engage the people across this country and fight shoulder to shoulder to ensure that the arc, but they cannot do it alone.

“We need the fire, passion and talent of young people to use the tools and resources of today to capture the nation and to give life to our movement,” said Richmond, adding that it was young women and young men who were on the frontlines of the fight for freedom during the Civil Rights Movement of the 1960s.

Richmond said that fighting injustice will also require the wisdom, clarity and foresight of our elders, because, “if we do not learn from our past, our future will be more of the same.”

The new CBC chair said that during 115th Congressional session, CBC members will continue to confront those who seek to divide the country and that they will be clear about their demands, on behalf of Black people. He added that CBC members will also venture outside of Washington to engage everyday people where they live, work and worship.

“We will heed the many lessons of our leaders that came before, but we will innovate and evolve to tackle the challenges of today,” said Richmond. “We will be deliberate in our thoughts and actions and we will engage on our own terms.”

Richmond continued: “We have the strength and the courage of our ancestors that survived the Middle Passage, who survived slavery and segregation and Jim Crow; and in that spirit we won’t give in, we won’t give up and we won’t fall back.”