IS Makes Unusual Claim of Responsibility for Turkey Attack 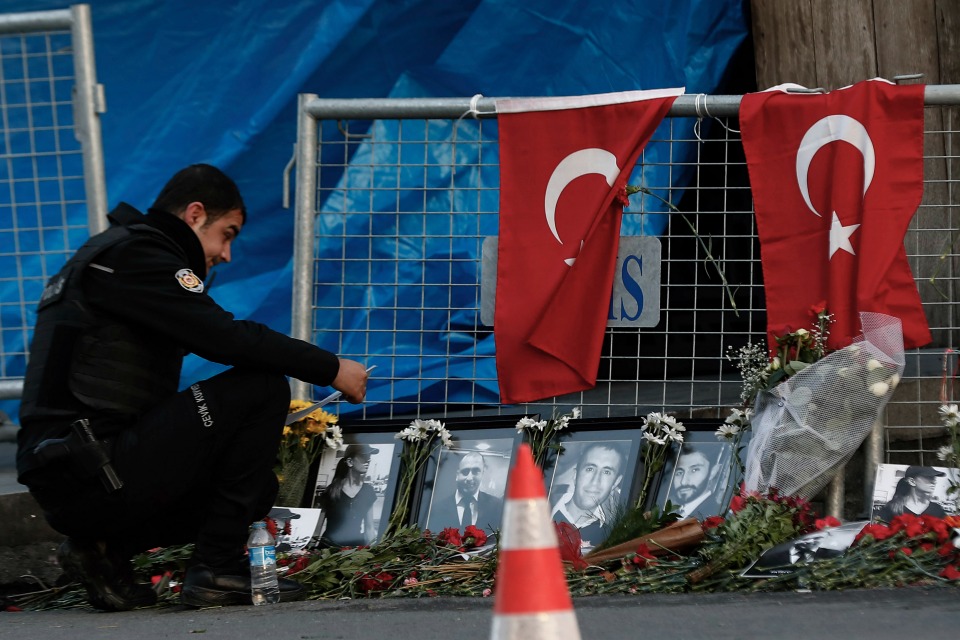 ISTANBUL (AP) — The Islamic State group on Monday made an unusual claim of responsibility for a major terrorist attack in Turkey, saying a "soldier of the caliphate" carried out the mass shooting at an Istanbul nightclub that killed 39 people as they welcomed the new year.

The group said Christian revelers were targeted in response to Turkish military operations against IS in northern Syria, but most of the dead were foreign tourists from Muslim countries.

The claim came after a recent IS propaganda video urged attacks on Turkey, which is home to an air base used in the U.S.-led effort against the group in Syria and Iraq.

Turkish authorities never confirmed the authenticity of the Dec. 22 video that purported to show Turkish soldiers who were burned alive, but access to social media was temporarily restricted in what appeared to be an effort to curb circulation of the footage.

The nightclub assailant, armed with a long-barreled weapon, killed a policeman and a civilian early Sunday outside the Reina club before entering and firing at some of the estimated 600 people inside. The establishment is frequented by famous locals, including singers, actors and athletes.

Authorities obtained the fingerprints and a basic description of the gunman and are close to identifying him, Deputy Prime Minister Numan Kurtulmus said Monday after a weekly cabinet meeting. He confirmed that eight people have been detained in connection with the attack.

The Islamic State group boasts of having cells in Turkey, regularly issues propaganda in Turkish and is believed to have hundreds of Turks in its ranks. But until now, the main act of aggression it had claimed in Turkey was the March 2016 killing of a Syrian journalist and an attack on riot police in the province of Diyarbakir, which Kurdish militants also claimed.

Other attacks in Turkey have been linked to IS, but without specific claims of responsibility.

For some analysts, the claim signaled a shift in IS strategy in Turkey, a predominantly Muslim nation and NATO member.

"It's a new phase," security analyst Michael Horowitz said. "What we saw before was an undeclared war, and now we're entering an open war."

The IS claim said only that the attacker struck to "let infidel Turkey know that the blood of Muslims that is being shed by its airstrikes and artillery shelling will turn into fire on its territories."

Early Turkish media reports suggested the nightclub gunman was probably from either Uzbekistan or Kyrgyzstan and may have been part of the same cell that staged a June attack on Istanbul Ataturk Airport that killed 45 people.

By attacking as the nation was celebrating the new year, the group indicated that it intends to continue being a "scourge" against Turkey in 2017, Kurtulmus said.

Initially, IS activity in Turkey appeared designed to stoke tensions with the country's ethnic Kurds and reflected events in Syria. The first dramatic attack came July 2015, when a suicide bomber hit a rally of activists in the border town of Suruc, at a time when Kurdish fighters in Syria where under siege just across the border in Kobane.

The worst IS-linked attack to rock Turkey came just months after, in October 2015, when twin suicide bombings killed 102 people at a peace rally in the capital, Ankara.

In 2016, IS was blamed by analysts and Turkish authorities for a wider range of attacks, including the airport assault and two other deadly bombings against tourists in Istanbul. The group was also suspected of directing an attack by a suicide bomber — possibly as young as 12 — that killed more than 50 people at an outdoor wedding in the city of Gaziantep.

Turkey launched an offensive to northern Syria in August in a bid to clear a strategic border area of IS militants and contain the gains of Kurdish fighters. In October, Turkish-backed Syrian forces took the symbolically important town of Dabiq, which is central to IS propaganda. Turkish jets regularly bomb IS in the then town of Al-Bab, and Ankara wants to play a role in dislodging IS from its bastion in Raqqa.

"Islamic State is sending a strong message to the Turkish government that it will pay in blood for the offensive in northern Syria," Anthony Skinner, an analyst with the Verisk Maplecroft security firm, wrote in an email to The Associated Press.

Many analysts also see the latest attack on Turkey as a sign of growing desperation within IS.

The group has been threatened in al-Bab, Raqqa and Mosul in Iraq and "needs to reassert itself," said Horowitz, director at the intelligence analysis firm Prime Source.

The aggression on Turkey, he added, is in line with the group's practice of equating mass-casualty terrorism attacks with heavy bombings and airstrikes on IS-held territories.

In its claim, IS said the nightclub attack was aimed at Christians celebrating a pagan holiday, suggesting a symbolic choice of target that can be justified to radical Sunni Muslim supporters as punishment of sinners. But in reality, many of the victims hailed from majority-Muslim nations in the Middle East.

Max Abrahms, a Northeastern University political scientist, said IS understands that civilian attacks can be counterproductive in countries where it has abundant support. To him, the change of tact in Turkey reflects the mindset of IS in the wake of losses in Syria and Iraq.

"There's no question that Islamic State is suffering in an irreversible way," Abrahms said. So the group wants to commit as many attacks as possible and "is much more likely to claim credit for them in order to signal that it has continued capability to mount operations around the world."

Also Monday, Anadolu said more than 100 Islamic State targets in Syria have been hit by Turkey and Russia in separate operations. Last week, Turkey and Russia brokered a cease-fire for Syria that excludes the IS and other groups considered to be terrorist organizations.