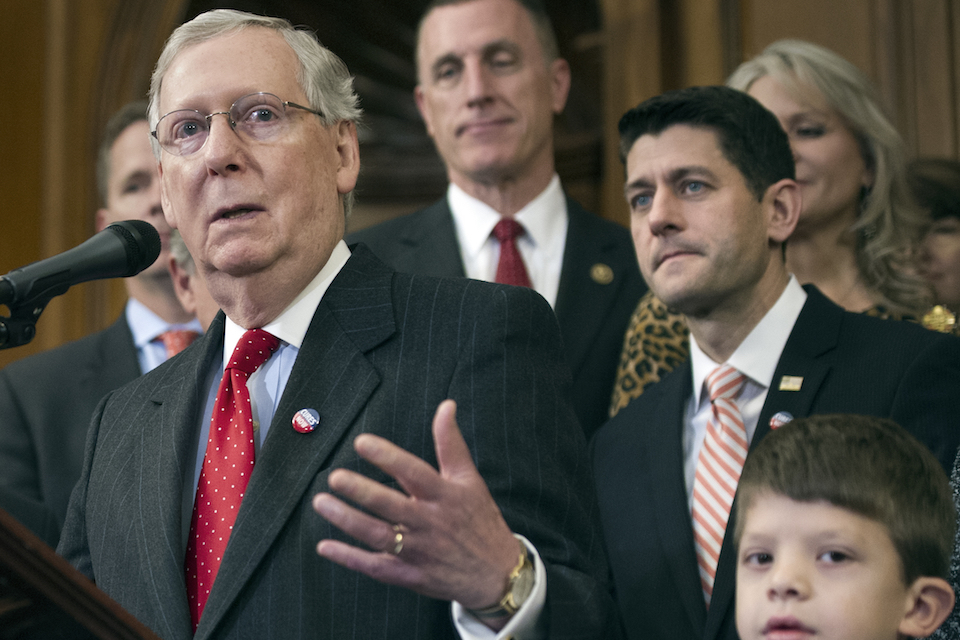 WASHINGTON (AP) — Republicans' grip on all levers of power stands as a mandate to the GOP-led Congress, which will move swiftly to try to undo eight years of outgoing President Barack Obama's agenda.

Beyond that, they'll look at a tax overhaul, reversing Obama-era environmental regulations and other conservative priorities.

Republicans will face some obstacles. House Minority Leader Nancy Pelosi says Democrats "stand ready to fight vigorously" to protect health care and other priorities, and Republicans will have to compromise with Senate Democrats to move major legislation through that chamber.

New members of the House and Senate will be sworn in on Tuesday, the first day of the new Congress.

The House will have 52 new members — 27 Republicans and 25 Democrats. There will be 241 Republicans in the House and 194 Democrats.

Trump is sworn in on Jan. 20, and Republicans in the Senate will spend the first days and weeks of his presidency pushing to confirm his Cabinet picks.

Democrats changed the rules and curbed the filibuster in 2013, making it easier for Republicans to move nominations. But even though they won't be able to block Trump's nominees, Democrats have pledged to fight many of them anyway, highlighting what they say is the hypocrisy of Trump's populist message and his wealthy, corporate-favoring nominees for several posts.

The Senate plans to begin repealing Obama's health care law on Tuesday, Congress' very first day, with consideration of a procedural measure that will shield from Democratic filibusters legislation annulling much of that statute.

Lawmakers will then spend the next few months working on legislation canceling broad swaths of the law.

Likely to go are its mandate that people buy health insurance or face IRS fines, and its expansion of Medicaid coverage to more lower-earning Americans. Some elements of the repeal likely wouldn't go into effect for two to four years.

Republicans will then begin the more complicated task of building a new system.

The GOP will have to craft new programs for the nation's $3 trillion health care system and make sure insurance markets don't collapse while the transition is under way.

Senate Majority Leader Mitch McConnell, R-Ky., and Speaker Paul Ryan, R-Wis., want a massive overhaul of the tax system with the goal of simplifying a complicated tax code that rewards wealthy people with smart accountants as well as corporations that can easily shift profits and jobs overseas.

It would be the first major tax overhaul in 30 years.

Trump has also advocated a tax overhaul, but with fewer details. He promises a tax cut for every income level, with more low-income families paying no income tax at all.

The strategy paid off, and the Republican Senate will consider whomever Trump nominates.

Ryan is the most powerful advocate in Washington for an overhaul of Medicare and a premium-support approach that would, over time, remake it into a voucher-like program that could force some seniors entering the program to buy health insurance on the open market instead of getting coverage through the traditional open-ended program.

But his ideas likely will run into a political reality.

Trump said on the campaign trail that he wouldn't cut the program, and Senate Republicans haven't been as enthusiastic either.

Like Medicare, some House conservatives have said they want to overhaul Social Security and slow the program's growth to curb spending. But Trump has said he doesn't want to touch those programs, and Ryan told CBS' "60 Minutes" in December that he has no plans to change Social Security.

Republican leaders have complained throughout Obama's presidency about burdensome regulations, a theme Trump used frequently during the campaign as well. GOP lawmakers now want to undo some of Obama's regulations and executive orders using the Congressional Review Act, a rarely invoked procedure.

Many of the regulations they are targeting are environmental rules put in place by the Environmental Protection Agency, including the Clean Power Plan to cut carbon pollution from coal-fired power plants, a clean water rule that has drawn the ire of farmers and another rule imposed in December to protect nearby streams from coal-mining debris.

Trump made rebuilding the nation's aging roads, bridges and airports a major part of his job-creation strategy in the presidential race.

But those plans appear to have fizzled, somewhat, as GOP leaders have questioned the spending.