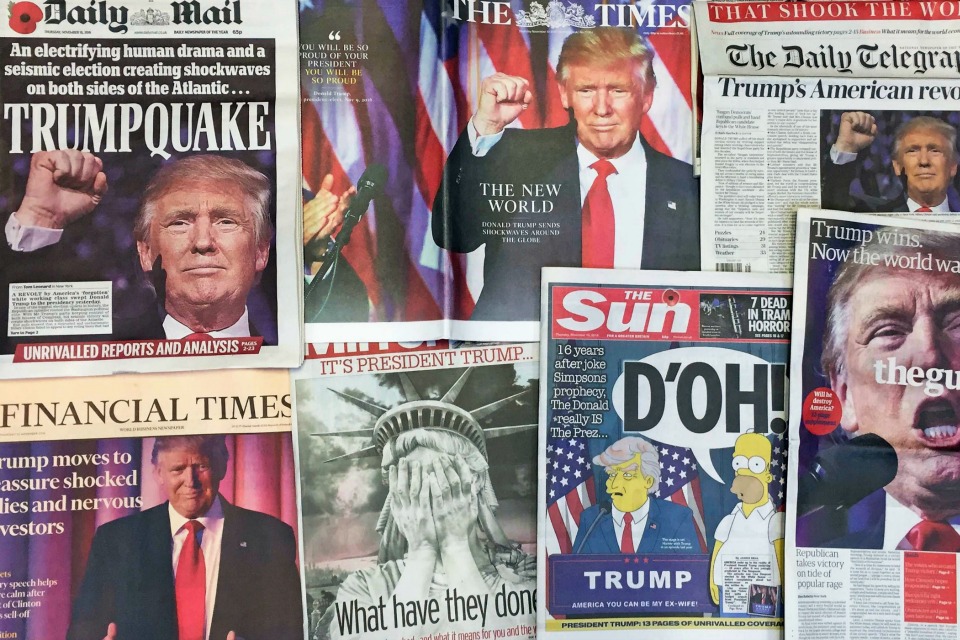 Fed up with Europe's union across borders? Reject it. Disgusted with the U.S. political establishment? Can it.

The news in 2016 was filled with battles over culture and territory that exposed divisions far deeper than many realized. But people confronting those divides repeatedly rejected the prospect of middle-ground solutions and the institutions put in place to deliver them.

While the headlines told many different stories, the thread connecting much of the news was a decisive torching of moderation, no matter how uncertain the consequences.

"You're not laughing now, are you?" Nigel Farage, a leader of the so-called Brexit campaign told the European Parliament after voters in Great Britain spurned membership in the continental union. "What the little people did ... was they rejected the multinationals, they rejected the merchant banks, they rejected big politics and they said actually, we want our country back," he said.

Farage was speaking only about the United Kingdom. But his observation that many people well beyond Britain shared that disdain for working within the system was borne out repeatedly in the year's biggest headlines.

In a U.S. presidential campaign fueled by anger and insults, in Syria's brutal war and Venezuela's massive protests, in fights over gay rights and migration, opposing sides rejected not just compromise but the politics of trying to forge it.

That was clear from the year's first days, when armed activists took over a national wildlife refuge in Oregon's high desert, opposing the federal government's control of public lands.

"It needs to be very clear that these buildings will never, ever return to the federal government," LaVoy Finicum, an Arizona rancher among the activists, told reporters. Weeks later, federal agents stopped vehicles outside the refuge, arresting eight of the activists and fatally shooting Finicum when he reached into a jacket that held a loaded gun.

Even in the rare cases when compromise prevailed, it was viewed with suspicion.

When a deal took effect in January limiting Iran's nuclear program in exchange for relief on sanctions, it marked the culmination of prolonged negotiation by President Barack Obama's administration. But the pact was repeatedly attacked by critics in both countries, including Donald Trump, saying it gave the other side too much.

"The wisest plan of crazy Trump is tearing up the nuclear deal," a leading Iranian hardliner, Hossein Shariatmadari, told his country's news agency.

In mid-February, Supreme Court Justice Antonin Scalia died in his sleep, leaving a vacuum on a court where he had long been the leading conservative voice. Barely an hour after Scalia's death was confirmed, Senate Majority Leader Mitch McConnell staked out an uncompromising position on what lay ahead.

"The American people should have a voice in the selection of their next Supreme Court justice," McConnell said, disregarding the fact that U.S. voters had twice elected Obama. "Therefore, this vacancy should not be filled until we have a new president."

North Carolina lawmakers prompted protests and counter-protests when they rushed through House Bill 2, voiding local gay-rights ordinances and limiting bathroom access for transgender people. Companies, the NBA and others followed through on threats to move jobs, games and performances out of the state, amplifying the division.

Tensions over U.S. policing bled into a third year. In July, a sniper killed five Dallas police officers during a protest over shootings of black men by police in Louisiana and Minnesota. A South Carolina jury failed to reach a verdict in the trial of an officer caught on video fatally shooting a black man fleeing a traffic stop.

Division, though, was hardly limited to the U.S.

In Venezuela, triple-digit inflation and shortages of food and medicine fueled 6,000 protests throughout the year that brought millions into the streets. But the government of President Nicolas Maduro, blamed by many voters for the chaos, blocked a recall campaign.

"If you're going to shoot me because I'm hungry, shoot me!" a young man shouted at a soldier during one protest in Caracas.

In Colombia, voters narrowly rejected a deal between the government and a guerrilla group to end a 52-year civil war. Even when lawmakers approved a renegotiated deal, the peace remained fragile.

In Brazil, senators impeached President Dilma Rousseff for manipulating budget figures, though many of the lawmakers were, themselves, tarred by accusations of corruption. South Korean President Park Geun-hye was stripped of power in December amid allegations she let a close friend use the government for financial gain.

Meanwhile, Syria's war entered its sixth year. But despite pressure by the U.S. and its allies, Russia and the government of President Bashar Assad unleashed an assault on Aleppo to wipe out rebels, driving up the toll in a conflict that has already claimed as many as 500,000 lives.

"This is a targeted strategy to terrorize civilians and to kill anybody and everybody who is in the way of their military objectives," U.S. Secretary of State John Kerry said, accusing Syria and Russia of war crimes.

"As long as war crimes are at question," a Russian government spokeswoman said, "the Americans should start with Iraq."

In Yemen, cease-fires broke down, extending a nearly two-year civil war. But with Syria capturing most international attention, a famine resulting from the turmoil was mostly overlooked.

As the fighting continued, terrorist strikes spread fear well beyond the Middle East.

A bombing at Brussels airport in March and another attack in June at Istanbul's airport by gunmen with explosives killed a total of nearly 80 people. More than 70 died when a bomb went off in a park in Pakistan, with a faction of the Pakistani Taliban claiming responsibility. In July, a terrorist drove a truck into a Bastille Day crowd in Nice, killing 86 and injuring more than 400 others. Islamic State claimed responsibility.

In June, security guard Omar Mateen opened fire inside a gay nightclub in Orlando, Florida, in the deadliest mass shooting ever in the U.S. In a call to police during the attack, which killed 49, Mateen — a U.S. citizen born to parents who immigrated from Afghanistan three decades earlier — said he was acting on behalf of the Islamic State group.

A day later, Trump pointed to the attack in a renewed call to ban Muslim immigrants to the U.S., while suggesting that American Muslims were turning a blind eye to terrorists in their midst.

"We cannot continue to allow thousands upon thousands of people to pour into our country, many of whom have the same thought process as this savage killer," Trump said.

Still, there were moments when the obstinacy that characterized so much of the news was set aside.

When boxing great Muhammad Ali died in June, a figure whose outspokenness on race, religion and other issues once made him a deeply polarizing figure was eulogized as an inspiration.

In March, Obama became the first U.S. president to visit Cuba since 1928, affirming a contentious move to resume ties after more than a half century of hostility. But the death of Cuba's Fidel Castro in November renewed criticism of the U.S. opening, with Trump threatening to "terminate the deal."

The hard line typified the outspokenness that attracted many voters. Critics lambasted the campaign for feeding prejudice against minorities and denigrating women, warning that Trump could not win.

But each time Democratic nominee Hillary Clinton appeared to open a gap between herself and the billionaire developer, a scandal over her use of a personal email server while serving as secretary of state returned to the headlines.

"Now it's time for America to bind the wounds of division," Trump told supporters in his first speech as president-elect.

The election's shocking outcome was arguably the year's biggest news story. But Trump's speech made headlines in no small part for sounding a note of moderation that was jarringly out of place in a year of discord.